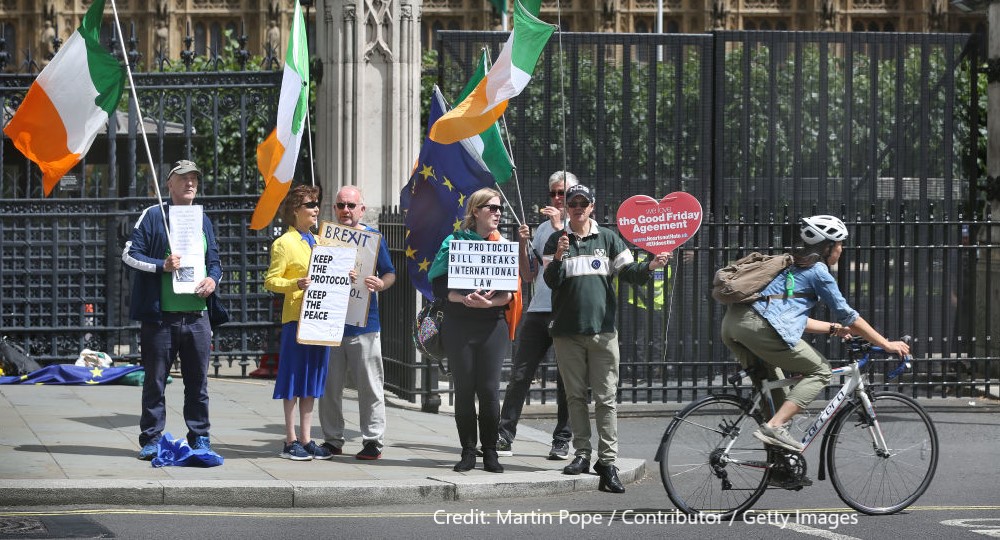 In September the UK will have a new Prime Minister. There may be changes of policy direction – on tax, on levelling up, on net zero. But so far no candidate has offered an alternative to proceeding with the Northern Ireland Protocol Bill and playing hardball with the EU over the future trading arrangements between GB and NI.

Following the introduction of the Northern Ireland Protocol Bill, some think that a new prime minister could offer a chance for a reset of relations with the EU – but there is scant evidence that it is possible to win the Conservative leadership while backing down on the UK government demands.

Indeed the EU is assuming that the leadership election is simply a hiatus and a new Prime Minister, either one who owes their election to the ERG, or who will be on constant watch for ERG manoeuvres, will simply double down.

This is bad for Northern Ireland, its people and businesses who need a government to deal with a myriad of pressing issues.  It’s bad for its economy, which continues to be bedevilled by uncertainty.  It’s bad for the rest of the UK, as the potential for a trade war with the EU makes the UK a less attractive destination for investment and production.

It’s bad for UK-EU cooperation which has ground to a halt on everything except Ukraine as Brussels shuts out Brits (and the UK and EU will desperately need to cooperate in the winter if the Russians turn off the gas taps). And the threat to break international law by a member of the G7 is bad for the fragile rules-based world order. Alexa, define a lose, lose, lose, lose situation.

The search for a solution is complicated. There are some real problems of substance with the practical operation of a fully implemented Protocol. Yes, the EU can point to the fact the UK signed up to it (and it did) but it is not clear that the people of Northern Ireland should suffer long-term from the irresponsibility of a Prime Minister who has now (almost) departed.

Yes, it is very difficult for the EU to have its tightly controlled external customs and regulatory frontier contracted out to an untrustworthy third party with which it has rock-bottom relations.  But the EU needs to recognise that there is no groundswell of British public opinion that will persuade mainstream politicians to sign up to an EEA style arrangement for the UK. So it will have to cope with a Brexited Britain on its doorstep.

Both sides have dug themselves in. The UK has convinced itself that only hardball tactics work. The EU thinks that it cannot move because the UK government is so little trusted that any concession would be pocketed by the UK and it would come back for more. The prospects of an autumn “tunnel” where the two sides emerge from behind closed door negotiations blinking into the December sunlight with a deal looks remote.

So is it time for a new Prime Minister to offer a different approach?

They might start by acknowledging that Johnson and Frost did a bad deal on Northern Ireland – and take responsibility for the UK government signing up to something it was not prepared to deliver. They can point out that even the EU has already acknowledged that, by softening some aspects of its operation, and thank the EU for progress on medicines. That would be easier for some candidates than others.

Then they should propose that both sides recognise that neither are trusted negotiators by some elements of the community in Northern Ireland (the UK government is not trusted across the community; the EU is not felt to ever have understood the concerns of the Unionists).

So, as happened before during the Northern Ireland peace process when it hit road blocks, the new Prime Minister should propose that the task of drawing up a workable long-term solution that best meets the requirements of all the stakeholders in the process – but in particular the people of Northern Ireland – should be remitted to an external arbitrator who should be a distinguished figure of international repute, supported by a secretariat and some nominated advisers.

The arbitrator would set up a process to make sure all voices were heard and all issues – practical, constitutional, political – were properly aired before proposing a way through.  That could either be a single compromise or a menu of choices and consequences for each side which would make clear where the responsibility lay (for example, if the UK chose to dynamically align on veterinary standards, X, Y, Z  checks could fall away).

And as part of the process both sides would be required to set out their best fallback. Both sides would agree up front that if they did not accept the arbitrator’s compromise, the other side’s fallback would be implemented. At any time in the process, the two sides could agree to opt out and come back with their own agreed solution.

In order to set the process off, the new Prime Minister would withdraw the Northern Ireland Protocol Bill and the EU would again suspend its infringement proceedings against the UK.  The grace periods would continue to function. While the Protocol is not operating as negotiated, the arbitrator would also be empowered to make authoritative rulings on what should happen in relation to  any disputes about real world concerns – for example if the EU is worried about smuggling via NI ports.

There are a huge number of reasons why this proposal might not fly. But the current process is stuck, and the dispute is destabilising Northern Ireland, casting a shadow over the UK economy and undermining improved UK-EU cooperation.

There is no shame in recognising the need for outside help – and if both sides are confident that their positions are objectively justifiable, they should have no qualms about accepting an independent view.

We called in outside help before to sort out problems in Northern Ireland before. It might be time to call in someone from the WTO – or another Canadian.