Brexit and a British Bill of Rights: four scenarios for human rights 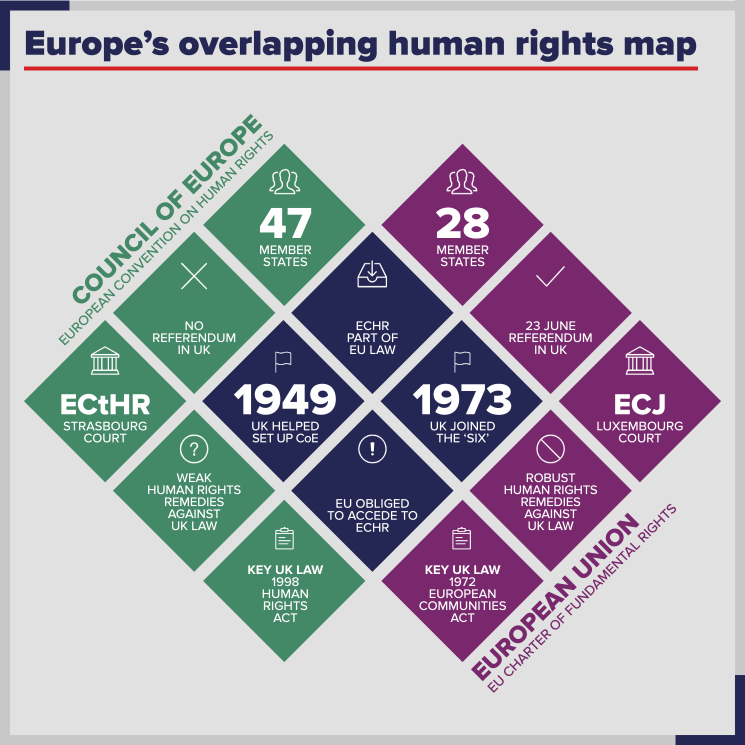 Theresa May recently raised the option of the UK staying within the EU, but leaving the European Convention on Human Rights (ECHR). Her intervention marked an important shift in the EU referendum debate and highlights the often misunderstood distinction between two separate organisations, the Council of Europe and the European Union.

The ECHR is an instrument of the Council of Europe, which has 47 member states, including the UK and Russia. The ECHR is enforced by the European Court of Human Rights in Strasbourg, and is completely separate to the EU. On the other hand, the EU has its own human rights treaty, the Charter of Fundamental Rights. The EU has 28 member states, including the UK (but not states outside of the EU like Russia). The Court of Justice of the European Union, which sits in Luxembourg, is responsible for overseeing compliance with the EU Charter as part of its remit to oversee compliance with EU law.

Of course, it is membership of the European Union, not the Council of Europe and the ECHR, which is subject to the referendum on 23 June. But the government has separately committed itself to the possible repeal of the Human Rights Act 1998 (HRA), which partially incorporates the ECHR into domestic law, with the aim of replacing it with a British Bill of Rights. This commitment had somewhat mellowed in recent months with the EU referendum coming to the fore, but May’s intervention has firmly placed the proposals back on the agenda.

This slightly confusing situation, in which two proposals for constitutional change now exist in tandem, can nevertheless be reduced down to four possible scenarios. The discussion below considers each of these scenarios and assesses their potential implications for UK citizens.

The first scenario could be regarded as the ‘status quo’ option of the UK voting to stay in the EU and maintaining the Human Rights Act. Even if this were to occur, however, there would likely still be incremental adjustments in the way human rights are enjoyed because both frameworks and the way they are interpreted are in constant flux.

The current EU human rights framework has undergone substantial change in recent years and will continue to evolve over time. In 2009 the Lisbon Treaty elevated the Charter of Fundamental Rights, which had originally been agreed in 2000, to the status of a treaty. This created an increased need for the Court of Justice to tease out the Charter’s provisions, such as the distinction between “rights” and “principles”. This situation was complicated by the fact the Charter does not clearly identify how some rights, particularly socio-economic rights, should be interpreted. The Charter also only applies when operating within the scope of EU law. So whilst the Charter is broad and far reaching, its application is also limited and at times highly contested.

In the case of the Human Rights Act, the ECHR is essentially a ‘living instrument’, with change occurring as both UK and Strasbourg judges interpret the treaty according to prevailing circumstances. Some of the strongest criticism of the Human Rights Act centres on Section 2, which was interpreted by Lord Bingham as imposing a duty on national courts to “keep pace with the Strasbourg jurisprudence as it evolves over time: no more, but certainly no less”.

Perhaps in response to these criticisms, there has been an increasing reliance by UK courts on the common law for the protection of human rights. According to the Supreme Court, “it was not the purpose of the [HRA] that the common law should become an ossuary”. Lady Hale refers to this trend as “UK constitutionalism on the march” – and even if the HRA remains in force, its evolving nature seems set to continue.

The second scenario would be to stay in the EU but repeal the Human Rights Act. Despite Michael Gove’s insistence that the government has “ruled nothing out”, the preferred outcome here appears to be that the UK would still remain a member of the ECHR after the Human Rights Act is repealed. In this scenario, the ECHR would revert to its status prior to 2000 when the Human Rights Act came into force: that of an international obligation without direct domestic application.

This does not however render the ECHR irrelevant. Rather, the common law has developed a so called “treaty presumption” – a principle that requires domestic courts to interpret statutes in a manner consistent with international obligations “if they are reasonably capable of bearing such a meaning”. Such a presumption would continue to be applied in this case, as Murray Hunt’s classic text on the topic makes clear.

The ECHR would also still have an impact on the UK via EU law. The rights contained in the ECHR form part of the general principles of EU law and courts are obliged, where rights overlap, to interpret cases within the EU’s Charter of Fundamental Rights in the same way as the ECHR (though they may still offer more extensive protection). The EU itself is obliged to accede to the ECHR, but this has been shelved for a period of reflection since the Court of Justice’s Opinion 2/13.

Ultimately, as EU law is supreme when in conflict with national law, the ECHR could still have influence in UK courts. For the same reason, assuming that a British Bill of Rights is introduced following a repeal of the Human Rights Act, the Charter of Fundamental Rights would supersede it should a conflict arise between the two.

One of the more radical suggestions posed by the UK Government is the possibility of establishing a UK ‘constitutional court’ which could conceivably supersede EU law if in conflict with the UK’s fundamental values. In practice, however, the tension between having supreme EU law for the purpose of ensuring a harmonised approach between states, and supreme UK law concerning basic constitutional principles, would be difficult to resolve. Separately, it is plausible to imagine that the repeal of the Human Rights Act would create a greater reliance on the Charter of Fundamental Rights, with more cases going to the Court of Justice in Luxembourg.

Finally, there may be constitutional complications with repealing the Human Rights Act in terms of the devolved legislatures. Several actors, including the Scottish First Minister, have argued that failure to first obtain the approval of the devolved legislatures may breach the Sewell Convention. In Northern Ireland, concerns have also been raised that a repeal of the Human Rights Act would breach the terms of the jurisdiction’s key peace agreement, which committed to incorporating the ECHR into domestic law. The House of Lords issued a report last week calling on the government to think again about introducing a Bill of Rights which might risk possible constitutional disruption for the devolved regions.

The third scenario would be to leave the EU but keep the Human Rights Act. This would remove the complex and evolving EU human rights framework from UK law. The EU’s Charter of Fundamental Rights is unique as a European human rights instrument for its comprehensive reflection of the indivisibility of rights including explicit provision for civil, political, economic, social and cultural rights, although the enforceability of the provisions remains contested. By contrast, the ECHR protects primarily civil and political rights (with the caveat that its rights can extend into the sphere of economic and social rights).

The remedies available for breach of EU law are more extensive because of the supremacy principle, than those available under the Human Rights Act. Therefore while the UK would retain a robust and established civil and political rights framework following a Brexit, it would reduce the diversity of rights with domestic force and limit its remedial options for rights violations.

The process for exiting the EU has been set out in Article 50 TEU and involves a negotiated exit. As discussed by Boyle, the outcome of these negotiations remains unclear, but it is unlikely that UK citizens in other EU member states and EU citizens in the UK would immediately lose their free movement and associated citizenship rights. Instead, a transitional period would most likely be introduced.

Finally, there is the option of leaving the EU and repealing the Human Rights Act. This would not mean that the UK would be without domestic human rights law. As mentioned, the UK has a long tradition of protecting rights through the common law but also through legislation, such as the Bill of Rights 1689 (this tradition does however focus upon civil and political rights and the remedies for violations are much weaker for UK citizens).

Further, any UK legislation which has been enacted to comply with EU law, such as the implementation of directives, or in response to a judgment of the European Court of Human Rights, would most likely remain in force until parliament decides otherwise. Until such time as this legislation is repealed there would most likely be a continuation of laws.

As highlighted by Boyle, exiting from two European systems could lead to a potential human rights legal deficit where access to rights and remedies are diminished without proper checks or safeguards.  A British Bill of Rights could potentially fill this void. However, according to principles of deliberative democracy, significant constitutional change – especially in relation to the nature of human rights and citizenship – ought to be preceded by a lengthy deliberative process that is fair, participative, democratic and informed.

While we currently await publication of the government’s consultation on the matter, there is a risk that the Bill of Rights process becomes an elite-driven exercise inadequately resourced for genuine public deliberation. As such, even though such a bill would be passed by the elected representatives in parliament, failure to engage more comprehensively with the public could delegitimise the eventual outcome.

Looking to the future under this outcome, the government may wish to borrow and learn from its approach to recent constitutional referendums, such as the Scottish independence referendum and the EU referendum, before it repeals the Human Rights Act or removes the UK from the Council of Europe’s ECHR framework.

Leanne Cochrane is ESRC Research Fellow on the Human Rights Transition project at the University of Roehampton and a Ph.D. Candidate at Queen’s University Belfast.