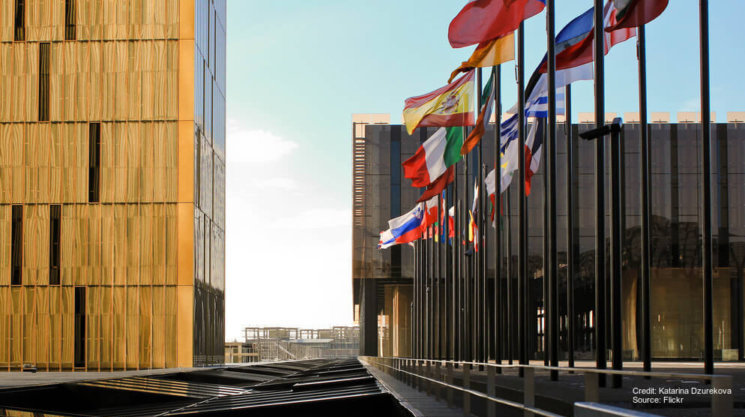 From February to November 2018, the draft withdrawal agreement (WA) saw a number of important changes. One of the most striking ones concerns dispute resolution.

I argue here that the legal solution found is part of a delicate compromise that represents a mini victory for the UK but one which is fragile due to its uncertain compatibility with EU law.

Throughout Brexit negotiations, the EU was adamant to maintain the jurisdiction of the European Court of Justice (ECJ), while the UK insisted on ending it.

The EU’s concern was to protect the autonomy and effectiveness of EU law, while the UK’s was the reverse: any degree of ECJ jurisdiction frustrates the infamous goal of taking back control and giving power back to Parliament.

The WA initially placed the ECJ at the heart of UK-EU dispute resolution. If consultations within the Joint Committee were to fail, the matter would go directly to the ECJ.

The latest version replaces the ECJ with arbitration under the auspices of the Permanent Court of Arbitration.

This is a significant concession by Michel Barnier and an important diplomatic triumph for Theresa May, who has repeatedly argued that disputes cannot be resolved by the court of either party, and for Boris Johnson, who has vocally advocated the option of arbitration.

If the Joint Committee cannot decide within three months, an arbitration panel may be set up. A list of arbiters is then put together: the UK and the EU each nominate ten persons to act as panel members and another five are nominated jointly to act as panel chairpersons.

From this pool of 25 arbiters, a five-member panel is appointed for each dispute.

Yet the ECJ retains limited jurisdiction. This is only activated if and when the arbitration panel encounters a question on the interpretation of a concept or provision of EU law, or a question on Britain’s compliance with ECJ judgments handed down against the UK during or after the transition period.

If such a question arises, the arbitration panel ‘shall’ refer it to the ECJ, the ECJ ‘shall’ give a ruling, and the ruling ‘shall’ be binding on the panel. The use of mandatory language is part of the trade-off: substantively, the ECJ decides; formally, the arbiters do. Therefore, while the ECJ decides about EU law, the arbiters decide the dispute.

This, however, raises legal dilemmas. If asked for an opinion under Article 218(11) TFEU, it is uncertain whether the ECJ would reject the WA given how strongly it has defended its authority as the ultimate interpreter of EU law.

In 1991, it rejected the establishment of the EEA Court because its jurisdiction would bind the ECJ, because it would use different interpretative methods, and because referrals to the ECJ were neither mandatory nor binding.

A revised and narrower EFTA Court was subsequently endorsed owing to explicit assurances that ECJ case law would not be affected. Brexit dispute resolution is inspired by the EEA model. However, while the EEA Agreement (Article 111(3)) merely enables referrals to the ECJ, the WA makes it obligatory.

In 2014, concerns about authority, autonomy and discretion similarly led to the ECJ’s rejection of the EU’s accession to the ECHR.

Earlier this year in Achmea, the arbitral tribunal envisaged under a bilateral investment treaty between Slovakia and the Netherlands was outlawed because the tribunal could not refer matters to the ECJ.

Maintaining the right to refer to the ECJ was also why the Benelux Court of Justice was acceptable, while the displacement of the same right was why the Unified Patent Litigation System was not. The WA, again, mandates referrals to the ECJ.

Yet although these observations may seem to bode well for the WA, here is why it may falter.

First, arbiters have the discretion to decide whether a question of EU law arises and they may refuse to request the ECJ’s interpretation when they find that it does not (Article 174(2) WA).

The only remedy is to ask the panel to review its assessment. This is problematic because the exercise of such discretion involves deciding about EU law, which only the ECJ can do.

Second, in case of non-referrals by national courts, the state could exceptionally become liable for damages under Köbler, whereas the arbiters reign free.

Therefore, the ECJ’s power over UK-EU withdrawal disputes has shrunk. But even with peremptory safeguards and the burden of political pressure, the ECJ may still not buy it.

By Dr Davor Jancic, lecturer in Law and director of the English and European Law LLB programmes, Queen Mary University of London.