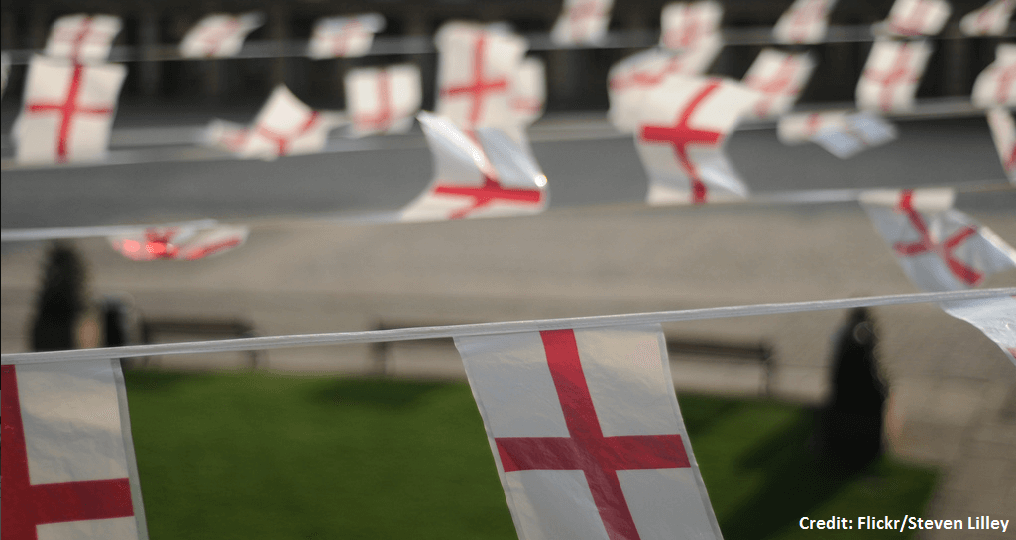 It’s hardly surprising that people in England identify as English. Yet, when thinking about national identity in England, we should remember three things. First, Englishness has had important political effects, including in the Brexit referendum.

Second, English identity remains politically volatile and lacks institutional expression. England has no equivalent to the SNP or the Scottish Parliament. Third, national identities in England are complicated. In 2016, 75% of people in England felt strongly English and 76% felt strongly British. A clear majority identified as both English and British.

Disentangling the effects of these interwoven identities can be challenging.

In the 2015 general election, David Cameron made a clear appeal to the English. His catch-phrase about a ‘coalition of chaos’, led by Labour but dominated by the SNP, helped to return a majority Conservative government. It may also have contributed to the SNP’s astonishing success that year.

Today, some aspects of Cameron’s English politics are largely forgotten. Who now recalls his ‘Carlisle Principle’ – that Scottish devolution should not have detrimental consequences for the rest of the UK?

The idea of English Votes for English Laws (EVEL) was introduced in October 2015. Yet English national identity played a critical role in the UK’s choice to leave the EU.

In the Brexit referendum, 85% of those who identified as ‘English, not British’ were Leavers, as were fully two thirds of people who feel ‘More English than British’. By contrast, over 60% of those emphasizing a British identity supported Remain, as were a narrow majority of those for whom both identities are equal.

Analysis shows that Englishness (measured by combining the exclusively English and more English than British groups) was a cause of Brexit.

What do we know about English national identity?

If understanding Englishness is critical to making sense of UK politics, we know surprisingly little about national identities in England. Elsewhere in the UK, national identities are central to public debate. For England, the national dimension of politics has been largely hidden within ‘British politics’.

Analysts rarely think of England as a political or analytical ‘unit’. The Future of England Surveys (FoES) used here are an exception, but political surveys are usually carried out on a Britain-wide basis. Given England’s size, it is generally possible to extract a useable English sample from them.

But that work is rarely done. Often, we are left analysing ‘Anglo-British’ politics – a picture of England may be blurred by the inclusion of non-English data. The samples for Wales, and often from Scotland as well, are generally too small to say anything about these countries. Northern Ireland is analysed on its own.

England between local government and devolution

England sits uneasily between the themes of devolved and local government. Elsewhere in Britain, devolution is ‘national’. But England’s dominance makes this form of devolution potentially unsettling for the UK.

Breaking the country up into smaller units is one response to the dilemmas posed by England and Englishness. A powerful case can be made for the decentralisation of political power in England, and several contributors to this collection make that case.

Over 40 years, the autonomy and scope of English local authorities have been reduced. Some English ‘regions’ have larger populations than Scotland.

Both Labour and Conservative governments have been tempted. Labour’s introduced a scheme for regional devolution – comprehensively defeated in the 2004 North-East referendum. The Conservatives have experimented with English city-regions.

However, ‘devolution as decentralisation’ is a limited and indirect way of addressing the political implications of English identity. It diverts attention from, and possibly neutralizes, the national character of Englishness.

For people uneasy about English identity, that might be a desirable outcome. Equally, even in the absence of dedicated English institutions, the Brexit referendum experience suggests that the English can find powerful ways of expressing themselves politically – and may do so again in the future.

Treating it as an inherently problematic and distasteful identity is likely only to exacerbate English political discontent.

England, Englishness and the UK’s future

If there is no easy institutional fix for England, the protean quality of English political identity could also be destabilising. For example, the English politics of leaving the EU could have major effects beyond Brexit. The 2017 FoES found many Brexit supporters in England apparently willing to sacrifice the UK’s union to achieve their key aim.

81 per cent of Leavers, rising to 87 per cent of Conservative Leavers, were willing to destabilise the Northern Irish peace process if necessary to achieve Brexit. Even larger majorities of these groups (88 and 92 per cent respectively) were prepared to countenance Scottish independence as a price for Brexit.

These attitudes might change in the face of a real prospect of the UK breaking-up. Even so, the reluctance of Leavers in England to accept constraints on Brexit – even in the name of the Union – is striking.

By Professor Daniel Wincott, Research Coordinator at The UK in a Changing Europe.