The causes of the referendum vote have been hotly debated. While attitudes on immigration and authoritarian values had stronger direct effects, distrust of Government was a significant predictor of voting to leave the EU.

Of people who reported distrusting the Government greatly, some 65% voted Leave.

The various leaders of the Leave movement exploited tailwinds of rising disenchantment with politicians and elites more broadly (a trend that dates back over half a century but which was turbocharged by the parliamentary expenses scandal and the global financial crisis) thereby weakening already shaky confidence in Britain’s political class.

In the aftermath of the 2016 referendum, political trust rallied slightly as the May Government enjoyed an initial honeymoon with voters.

That trust collapsed, however, in the aftermath of the disastrous showing of the Conservatives in the 2017 election,as Brexit hit an impasse with successive deals rejected by Parliament, leaving many voters frustrated.

Survey data from the British Election Study reveals how political trust has been realigned since Boris Johnson came to power. Among Leavers, who were previously more likely to express distrust, trust in MPs has climbed steadily since the summer of 2019, a trend that has been sustained into the middle of the coronavirus pandemic.

At the same time, trust among Remainers has declined.

This pattern is consistent with studies that show that supporters of the losing side in elections tend to express lower levels of satisfaction with democracy, and highlights how Brexit identity now seems to condition trust in the UK’s politicians and democracy.

Significantly, though, trust is no higher among Leavers than it was in the two years leading up to the referendum, while for Remainers it has, as Figure 1 shows, fallen precipitously (by almost a point on a seven-point scale from ‘no trust’ to ‘a great deal of trust’).

How long this loss of faith will persist for a group — one with a higher level of education and professional occupations — that was once more trusting of the political class, remains uncertain.

So far, ‘getting Brexit done’ has restored some trust in British politics, though not on the Remain side of the new political divide. But what might lie ahead for political trust?

While there is much uncertainty, it is possible to identify a number of plausible scenarios that could play out in the months and years ahead.

The first is a Brexit bonus for political trust following the Government’s successful agreement of a last-minute deal with the EU. With Brexit done, control taken back, and the defining pledge of the Johnson Government delivered, the public might reward the government with greater trust — at least in the short-term.

For Leavers this would continue the trend of rising trust since the nadir at the end of the May premiership. For Remainers, this might be due to a fatalistic acceptance that the end of the road has been reached — with trust returning to levels closer to their pre-referendum level for this group. 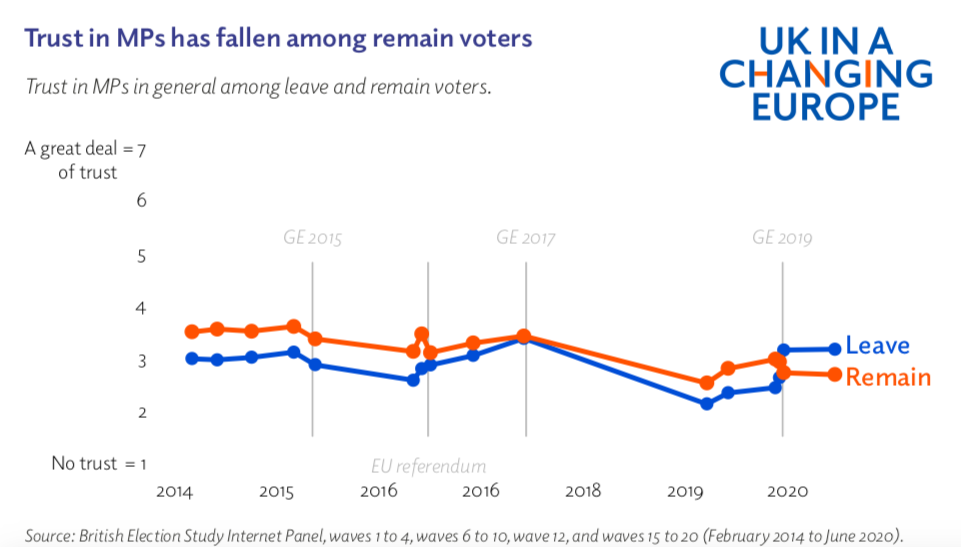 The second scenario is of political trust becalmed — with trends shaped by the polarized contours of our new Brexit identities.

In focus groups we ran for UK in a Changing Europe during the summer of 2020 in towns and cities in England, the PM and his Government were already trusted on the issue of Brexit, but the political benefits from a deal could be slight: Brexit is largely seen as already done by both Leavers and Remainers.

On these terms, Brexit is a card that has already been played and unlikely to have a large impact on levels of political trust — leaving it higher among Leavers than Remainers.

It is possible that even if Brexit results in short-term disruption and economic pain the effects on political trust might be modest: in our focus groups, Leave supporters seemed phlegmatic about any costs of Brexit, with most considering themselves in it for the long haul.

Under this scenario, it should not automatically be assumed that political trust would collapse because the deal does not offer the instant gratification of sunlit uplands.

The final scenario is of a gradual depletion of political trust, accelerated by performance-based shocks. Any disruption to transport and businesses in early 2021 as the UK adjusts to its new terms of engagement with the EU could yet deliver a competence reckoning for the government, reducing trust among Leavers and Remainers alike.

This is why how the deal works out in practice will be crucial in ensuring a smooth transition free from snafus. While the trade deal marks the end of the latest chapter in UK-EU relations, the question of Europe cannot be completely exorcised from British politics — even if many voters are keen to move on.

There may be some Eurosceptics in the Conservative Party for whom the withdrawal of the UK from EU governance does not go far enough, while there will likely be others pushing for closer ties on the economy, security and other policy areas.

UK-EU relations are therefore likely to periodically flare up on the political agenda — and as such may be a source of public distrust, directed at UK Government and/or the EU.

In this scenario, voters’ realisation that leaving the EU does not mean an end to having to deal with the EU could lead to an erosion of trust, especially among Leave supporters expecting a ‘clean break’.

Beyond these possibilities, a final scenario is that Brexit ceases to be a focus for political trust. Our focus groups suggest a desire among many Leavers and Remainers to move on, look to the future and attend to ‘real’ priorities.

It may be that political trust will only be restored through addressing the concerns of citizens on other policy issues — such as overseeing post-Covid-19 economic recovery, delivering on promises of ‘levelling-up’, and addressing social and economic inequalities that the coronavirus pandemic has laid bare.

Brexit’s legacy for political trust remains up in the air, but it ultimately will be determined by how Britain’s political class deliver on the outcomes expected by voters on both sides of the Brexit divide.

By Professor Will Jennings, Professor of Political Science and Public Policy at the University of Southampton. This piece was taken from the Brexit and Beyond: Public Opinion report.