Brexit and public opinion: no deal

If the UK leaves the EU without a deal, it is widely (though far from universally) accepted within government, Parliament and the world of Brexit academic research that there will be some significant short-term social and economic disruption. However, the likelihood of such an outcome may well depend on how costly it is perceived to be by both MPs, and the voters to whom they are accountable.

There are three questions that will play a part in determining the political implications of a no deal Brexit. First, do the public understand what no deal is likely to involve? Second, what do MPs think about the likely effects of no deal, and how does this compare to public opinion? Third, if some sections of the public and some MPs remain sceptical of the ‘real world’ effects forecasted, who are they?

It is worth starting with what the public very clearly knows to be true. Despite claims to the contary, there is no polling evidence to suggest that any significant section of the population think a no deal Brexit would mean that the UK would remain in the EU. Just 4% think that no deal means a reversion to the status quo ante. Only 8% think that ‘nothing important would really change’ if the UK left the EU without a deal. While Leave voters are three times more likely to think this – 12% versus 4% – the idea that no deal would not be an event with consequences, for good or bad, is not widely held.

Towards the end of 2018, the concept of a ‘managed no deal’ became the newest entry in the Brexit lexicon. Leaving aside the slim chance the UK and the EU continue negotiations in good faith without legal guarantees and obligations on citizen’s rights, the Irish border and financial payments, a key question is whether voters believe something like a ‘managed no deal’ is plausible. The answer here is a lot more mixed: a plurality, but not a majority, of 44% believe that the UK would become a non-member of the EU and negotiations would end; 27% believe that the UK would no longer be an EU member, but negotiations would continue.

It is commonly asserted in Westminster that a significant majority of MPs oppose no deal, and that therefore such an outcome is unlikely. However, the procedural and constitutional hurdles involved in preventing it – if the government was intent on pursuing the policy – are significant. So how concerned are MPs?

The views of MPs and voters are laid out in figure 1. As well as showing overall opinion, we also divide MPs between those who voted Leave and Remain in 2016. MPs and voters share roughly the same hierarchy of concerns about Brexit – worrying most about lorry queues and a fall in sterling, and least about flight cancellations and house price declines. However, in every case MPs express greater overall concern than voters. It seems the public is more complacent about no deal than the policymakers whose choices will determine whether it happens.

This overall story is, however, rather misleading because it masks deep polarisation in the Commons. Although MPs broadly split the same way as the voters (and indeed, as pointed out in this report, the party members) the divisions between parliamentarians are much deeper. Concerns about most forms of no deal disruption are very widespread among Remain MPs, while only a minority of Leave MPs express any, while virtually none worry about the impact on medical supplies, flights or house prices.

These stark differences have a major impact on the overall mood of the Commons. Despite Leave MPs being outnumbered in our survey of 100 MPs by roughly two to one, their lack of concern about medical supplies and house prices mean that only 50% of the Commons anticipates medical supply shortages or a substantial decline in house prices. On the other hand, on the issues where a significant minority of Leave MPs join an overwhelming number of Remain MPs there is a large majority in the Commons expressing concern – 79% on falls in sterling and 71% on lorry queues. 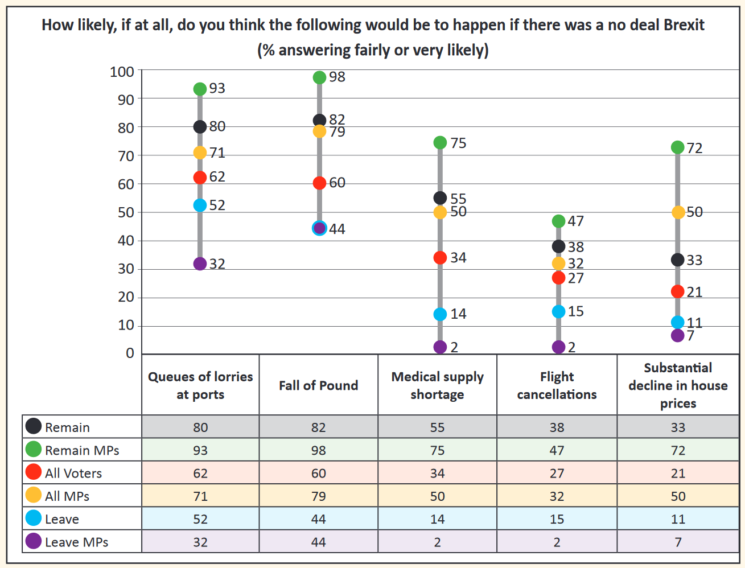 These divides are explained, in part, by party difference. Only 10% of Conservative MPs felt there would be a shortage of key medical supplies, and 28% a fall in house prices, under their government’s watch. A Conservative government looking to alleviate such risks ahead of time therefore first has to convince many of its own backbenchers that they exist.