Brexit and public opinion: the EU 27

The Brexit process is shaped not only by decisions in Downing Street, but also by the other 27 member states of the EU. Other governments also have voters, and have to take their opinions into account when negotiating Brexit.

British hopes that the remaining EU countries would be willing to offer the UK better withdrawal terms than the EU Commission have been repeatedly frustrated. Instead, the EU27 countries have been equally unwilling to allow British ‘cherry-picking’ and this position seems to have the support of their electorates.

Systematic surveys of EU27 public opinion are rare, I have been running regular surveys of about 9,000 EU27 working-age respondents in 6-month intervals since the start of the negotiations in the summer of 2017.

The main insight contradicts the assertion made by Daniel Hannan that “lots of Europeans are uneasy at the line the [EU] Commission is taking on Brexit”. Rather, the European public seems to support the EU’s approach to the Brexit negotiations.

In December 2018, 42% of EU27 voters stated that the EU should take a hard or very hard line in the Brexit negotiations, meaning that it insists on a large ‘Brexit bill,’ secures special rights for EU citizens living in the UK, and denies the UK privileged access to its single market.

In contrast, only about 12% supported an approach that would accommodate many of the UK’s demands. When asked about how they evaluated their own governments’ stance, 41% of respondents said that it was just right, whereas about one third thought that their government’s approach was somewhat or significantly too hard.

Support for a non-accommodating EU negotiating line is particularly strong (59%) among those EU27 Europeans who follow the Brexit process closely. 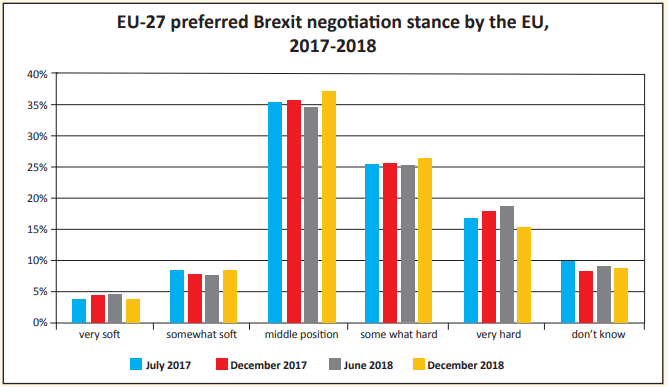 It shows that these have not changed much, even after the political reaction in the UK to the Withdrawal Agreement seemingly made no deal a more conceivable outcome.

This may seem surprising. After all, the EU27’s trade exposure to Brexit is estimated to amount to approximately 2.6% of EU27 GDP, and the overall fallout is likely to be much larger. For example, a no deal Brexit is forecast to reduce regional labour income by 6.5% in Baden-Württemberg in southwest Germany and by 7.4% in Kilkennyin south-east Ireland.

Little surprise, then, that maintaining their countries’ trade relations with the UK is the most important goal in the Brexit negotiations for 35% of respondents.

However, this concern does not translate into a more accommodating stance towards the UK. People who live in regions more heavily exposed to Brexit are not more likely to support a softer negotiating line. In fact, my data show that respondents who have business and personal ties tend to favour a harder, rather than a softer approach.

This echoes statements from business associations on the continent that they worry more about the stability of the single market than about a good trade deal with UK.

One reason for this is fear of contagion: if Brexit is seen to go well for the UK, this might create the risk of a domino effect. EU27 voters who think that Brexit will be good for the UK are in fact more likely to support the exit of their own country from the EU.

Eurosceptics therefore see establishing a standard procedure that makes it easier for countries to leave the EU in the future as the most important goal in the Brexit negotiations. For those worrying about the stability of the EU, this creates incentives for a tough negotiation stance.

Against this backdrop it is not surprising that, when asked what they see as the most important goal for the Brexit negotiations, those with a positive opinion of the EU mention avoiding other countries leaving the EU most frequently.

Voters with a more positive view of the EU therefore take a more uncompromising negotiation stance towards the UK.

Overall, both EU27 voters and governments face an accommodation dilemma: on the one hand, a hard line – or even a no deal scenario – will be costly not just for the UK, but also for the remaining member states.

But, at the same time, making the UK better off outside the EU threatens the long-term stability of the EU. This concern seems a more powerful motivation for an uncompromising negotiation strategy than any wish to punish the UK for leaving.

Only 7% state that they see such punishment as the most important goal of the Brexit negotiations. Punishment is by far the least frequently mentioned goal.

The accommodation dilemma is likely to become more pronounced once the EU and the UK enter the negotiations about the future relationship. As long as euroscepticism remains a threat to the long-term stability of the EU, it will serve as a check on its appetite to accommodate the UK.

By Stefanie Walter, professor for international relations and political economy at The University of Zurich. Read the full ‘Brexit and public opinion 2019’ report here.