Brexit and the border: An overview of possible outcomes 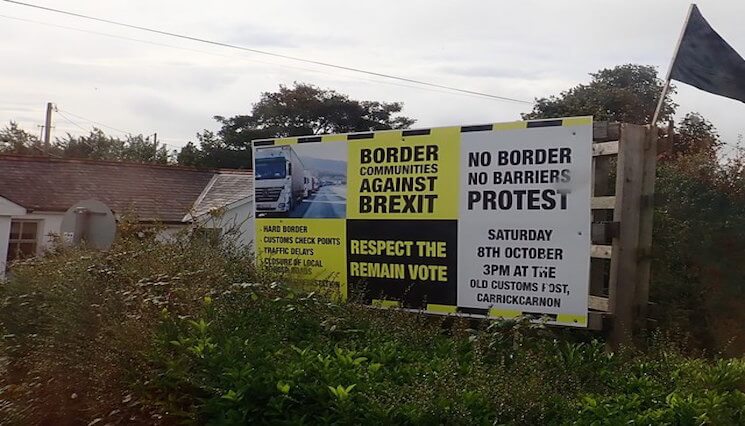 While the Irish border has virtually defined politics in this small area of north-west Europe for the best part of a blood soaked century, recent events have propelled the issue to the centre of international attention.  Political brinksmanship, intraparty conflicts, and fast moving events have made for an exciting addition to the news cycle, but have done little to improve the public knowledge of the central issues at stake.

Perhaps this is an appropriate time to take a step back and take a broader perspective of how the border may look in the future, putting aside concerns about what might be most plausible in the current political climate.

We can frame our thoughts around a set of simple questions.  Who will the border be for?  What goods will be effected?  Where will the border be?  Finally, how ‘hard’ will the border be?  Each of these questions have a discreet number of possible answers, and when reorganised into logically possible combinations, a wide spectrum of scenarios emerge.   Below, these scenarios are presented extremely briefly, but this sacrifice in detail is made in order to give as wide as possible an account of the range of possibilities.  A more detailed explanation of each option can be found here.

This is the scenario everyone wants to avoid, although there is disagreement as to how this is to be achieved.  It would involve the use of security forces (either British, Irish or both), policing traffic that moves north and south of the present border.  The movement of all people and all goods would be subject to possible checks.  Travel documents may be required for all people and all goods, but this may not necessarily be the case.  It may be that only goods from particular places, and travellers with particular passports would be required to apply for additional documents.  A high level of data sharing would exist between the UK and the Republic of Ireland.  Additional delays should be expected when making this journey.

This scenario would have an identical effect on the requirement to possess additional documents for the travel of people and goods.  It would differ only in how this is policed.  Rather than highly visible security, high-tech solutions would be employed, such as cameras at main roads.  This would increase the likelihood of smuggling, but more significantly it would create a soft target for those wishing to disrupt border policing.  Should cameras be destroyed a decision would have to be made as to whether this solution would require additional, more visible policing.

A little discussed scenario that is still logically possible would be to have a legal requirement to police the border, but for strategic reasons it is decided that this is enforced only very rarely.   Only a very small number of goods vehicles are checked for their required documents, and people could move largely without restriction.  The EU would have to accept the contamination of their markets by those breaking the rules, but this may be considered a worthwhile exchange to avoid civil disobedience by border communities.

UK Leaves the EU, but retains some elements of membership

Should the entire UK remain in the single market there would have to be acceptance of the ‘Four Freedoms’.  In this case the border in Ireland would be functionally identical to the status quo.  Only people and goods from outside the UK and EU would have their travel across the border disrupted.

Membership of the customs union does not require the same commitment to the freedom of movement of people.  Goods from within the UK and EU would not face any additional documents or checks, but the movement of people could be restricted.  How this is policed, and who would face additional travel restrictions or documents, is uncertain.  This then has the potential to create a hard border – along the lines set out above.

This scenario would permit the maintenance of a frictionless north-south border with regards to people and goods, but would require a new border in the Irish Sea.  New rules could be introduced that levy taxation on goods moving between Northern Ireland and Great Britain, and restrict the movement of either all EU citizens, or if the Common Travel Area is maintained, only non-Irish EU citizens.  In that case, an EU citizen would be able to travel unimpeded between Dublin and Belfast, but would face additional challenges once they attempted to board a flight to London.

In this option a complex system of regulation would be required at both the north-south border and in the Irish Sea.  As Great Britain would be outside the customs union, goods moving between Northern Ireland and the rest of the UK would face identical restrictions to the scenario above.  However, free movement of people could not be guaranteed for those moving across the north-south border and so additional checks may be implemented there as well.  Which people would face additional checks and required documents would depend on the continued maintenance of the Common Travel Area between the UK and the Republic of Ireland.

There are a number of logically possible ways in which Northern Ireland could remain a full member of the EU.  These are detailed in the final three options presented here.  One way would involve the decision being made in the current Brexit negotiations.  If this were to occur, the status quo would continue along the north-south border.  However, decisions would still have to be made about the new border between Northern Ireland and the rest of the UK.  Additional restrictions to the movement of people and goods could be created.  Should a trade deal not be agreed, taxation may be levied on goods moving across this ‘wet’ border.  Free movement of EU citizens could not be guaranteed, and if the Common Travel Area is not maintained, this may interfere with the travel of Irish citizens, perhaps even those residents of Northern Ireland who hold an Irish passport.

Should a border poll be called that succeeded in reunifying Ireland, this would mean automatic full membership of the EU for Northern Ireland.  However, decisions would still have to be made about travel to and from Great Britain and any part of the newly unified country.  Which goods and which people would face new challenges to movement would depend on whether or not a trade deal could be negotiated, and on the maintenance of the Common Travel Area.

This is certainly the least likely outcome of the Brexit negotiations, however it deserves inclusion as it is one of the logical outcomes of a particular set of combinations of different forms of border.  An independent Northern Ireland that negotiates EU membership would have to accept the ‘Four Freedoms’ of the single market.  This would mean the north-south border would continue in the same way as it does at the moment.  However, there are several ways in which the border in the Irish Sea could be implemented that may have the potential to significantly restrict the movement of people and/or goods.

Kevin McNicholl is a post-doctoral research fellow at Queen’s University Belfast.  His research focuses on citizens’ attitudes toward the border and attempts to better understand which of the possible post-Brexit outcomes they prefer.  His work also looks at national identity in divided societies, particularly the new ‘Northern Irish’ identity.