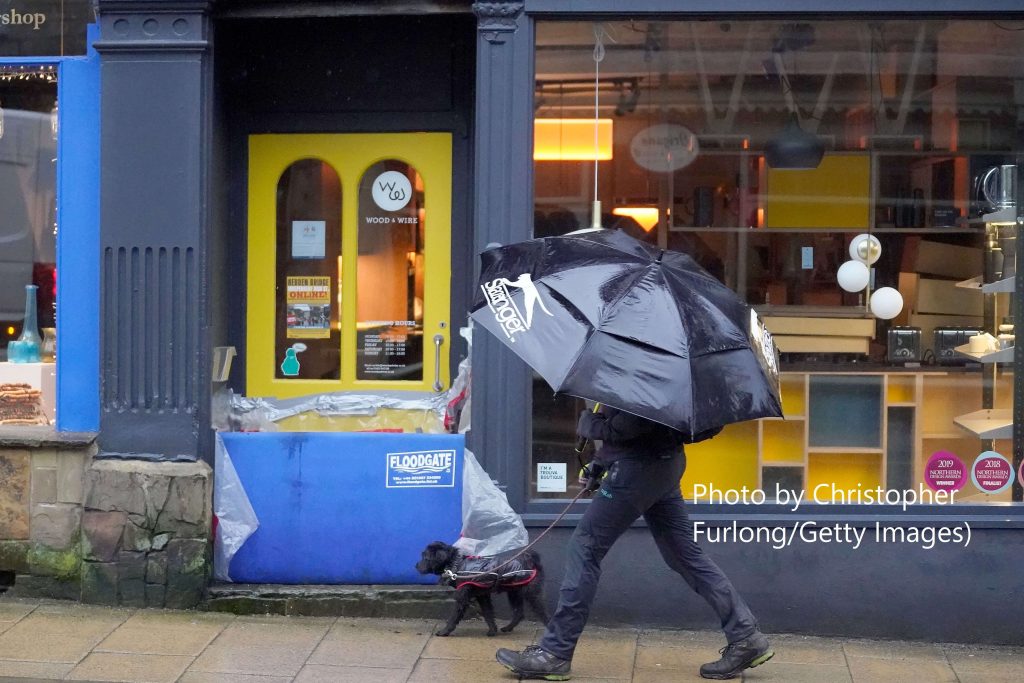 Accession to the European Economic Community in 1973 kicked off a decade of profound structural changes—monetarism, deregulation, liberalisation, trade union reform, deindustrialisation—that shape our economy today, for good or ill.

We are a prosperous, relatively open and market-oriented economy, with a flexible labour market and are very successful in some high-value, high-productivity sectors. But we also have a long tail of low-productivity companies and sectors.

That translates into deep and persistent structural inequalities, with our life chances still driven by class, race and geography.

Will Brexit mark a similar structural break? And if so, in what direction? In our latest report, UK in a Changing Europe examines these questions from a variety of angles: trade, migration, inequality, “levelling up,” productivity, and more.

By now everyone is familiar with the consensus predictions of the direct economic impact of Brexit on UK GDP and per capita incomes: a significant but not catastrophic reduction in growth.

Our modelling suggests the cost will be 6.4 per cent of GDP, with an annual reduction in growth of perhaps half a per cent. 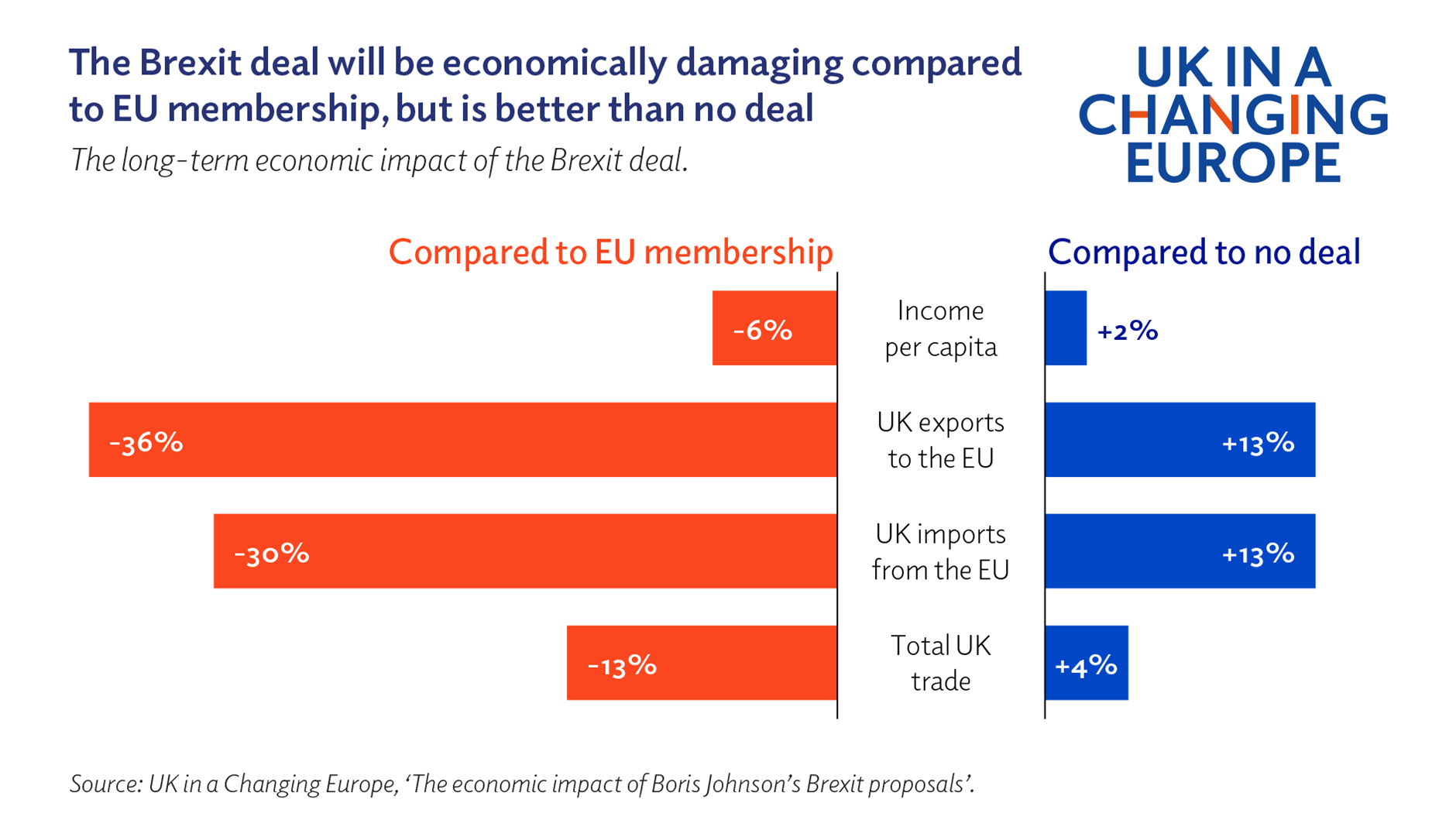 But what this means for UK trade deserves unpacking. The Brexit deal secures tariff- and quota-free access for goods produced in the UK.

But it also takes us out of the Single Market and Customs Union, meaning new border controls and checks, rules of origin requirements, and a host of new regulations in service sectors.

Even in the first week of the year the impact of these new non-tariff barriers has been visible in everything from the wholesale transfer of €6bn in daily share trading from London to the continent, to delays and loss of business for British fishermen.

Some of the headlines may reflect lack of preparation (and of time to prepare) on the part of both business and government.

But some reflect permanent changes to the trade and regulatory environment, which will over time mean permanent shifts in business processes and supply chains.

The eventual impact on UK-EU trade will be dramatic: we estimate reductions of about a third in both imports and exports.

These reductions will make the UK a much less open economy, and one that is much less integrated into European and global supply chains, reversing 40 years of structural transformation.

Can this be compensated by expanding our trade with the rest of the world, especially in high-value services?

The EU is only a small and shrinking share of world GDP. Nevertheless, it still represents nearly half of our trade, and that proportion has shrunk relatively slowly over the last two decades.

Despite fanciful talk of the “death of distance,” the share of our service exports which goes to the EU has remained remarkably stable.

Nor does it seem likely that new trade deals will change this much—there is little evidence to suggest that any free trade agreement with the US or other third countries would do much to boost trade in services.

The UK risks becoming a more inward-focused and less competitive economy—unless we actively take steps in the other direction.

On immigration, for example, while the end of free movement with the EU will reduce labour market flexibility, the ending of arbitrary and damaging quotas on skilled workers from outside the EU is already a positive move.

And if it materialises, large-scale inflows of British National (overseas) citizens from Hong Kong could present a huge economic opportunity.

Can the UK use the “reset moment” provided by Brexit to address some of our long-run structural problems?

Our twin problems of inequality/low wages, and low and stagnant productivity, are not caused by Brexit, and Brexit does not directly provide new mechanisms by which to address them.

While it may be possible in some respects to tweak our regulatory framework outside the EU, such changes would be unlikely to have major economic impacts.

But Brexit has undoubtedly changed the terms of the political debate and the economic agenda.

And here we can paint both an optimistic and pessimistic picture. If “levelling up” simply means some extra spending on infrastructure in the north, combined with a healthy dollop of pork-barrel funding managed by Whitehall and directed at shoring up the electoral prospects of Conservative MPs, there is no reason to expect it to do more than similar approaches in the Italian Mezzogiorno.

And if it is combined with a culture war that, post-Covid, pits the “white working class,” the north and pensioners against disadvantaged groups in cities, ethnic minorities and younger workers, it will exacerbate rather than reduce existing inequalities.

Alongside reduced openness to trade and migration, the future would be poorer, more unequal and even more divided.

But “levelling up” could mean taking advantage of the economic, fiscal and political space that has opened up over the last few years.

This would require sustained policy action across a range of issues, from housing to business investment to skills and education to social care—all of which we have struggled with for decades, and where policy has gone backwards not forwards during the austerity years.

It would require a genuine, and long-term, effort to redistribute wealth, power and institutional capacity from Whitehall and Westminster.

None of this would be easy. In some respects it would, ironically, make the UK look more European, not less. But it represents the real opportunity for Britain beyond Brexit.

By Jonathan Portes, senior fellow at the UK in a Changing Europe. You can read the full report ‘Brexit and Beyond’ here. This piece originally featured in Prospect.