Brexit and the future of globalisation

Brexit may prove to be a minor diversion on the path to greater integration, a sign that globalisation has reached its limits, or the start of a new era of protectionism. Which of these eventualities is realised will depend, in part, upon whether leave voters supported Brexit to reclaim sovereignty from the EU or as a protest against their economic and social struggles. We do not yet know the relative importance of these two motivations.

Who voted for Brexit?

The referendum split the electorate on the basis of geography, age, education and ethnicity. Figure 1 shows data on voting patterns. Older and less educated voters were more likely to vote leave, while large majorities of black and Asian voters supported remain. Voting to leave the EU was also strongly associated with holding socially conservative political beliefs and thinking life in Britain is getting worse rather than better.

Statistical analysis of voting patterns has established three main regularities. First, education and, to a lesser extent, age are the strongest demographic predictors of voting behaviour. Second, poor economic outcomes at the individual or area level are associated with voting to leave, but economic variables account for less of the variation in the leave vote share than educational differences.

Overall, the picture painted by the voting data is that the Brexit campaign succeeded because it received the support of a coalition of voters who felt left behind by modern Britain. People may have felt left-behind because of their education, age, economic situation or because of tensions between their values and the direction of social change, but, broadly speaking, a feeling of social and economic exclusion appears to have translated into support for Brexit. 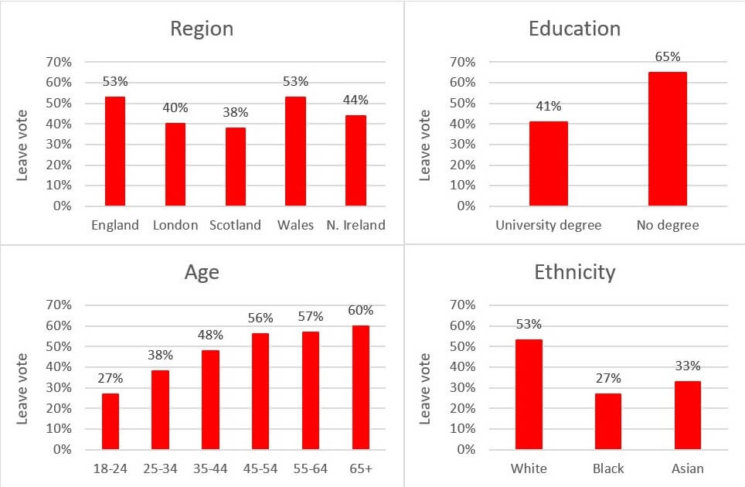 Why did the UK vote for Brexit?

Knowing that left-behind voters supported Brexit does not tell us why they voted for Brexit. One possible explanation can be ruled out immediately. The Brexit vote was not the result of a rational assessment of the economic costs and benefits of Brexit. There is a consensus among economists that EU membership benefits the UK economy on aggregate and there is no evidence changes in either trade or immigration due to EU membership have had large enough distributional consequences to offset the aggregate benefits and leave left-behind voters worse off. This leaves two plausible hypotheses for why the UK voted to leave.

Hypothesis 1: Primacy of the Nation State. Successful democratic government requires the consent and participation of the governed. British people identify as citizens of the UK not the EU. Consequently, they feel the UK should be governed as a sovereign nation state. According to this hypothesis, the UK voted to leave because Brexit supporters wanted to take back control of their borders and their country.

Hypothesis 2: Scapegoating of the EU. Many people feel left behind by modern Britain. Influenced by the anti-EU sentiments expressed by Britain’s newspapers and eurosceptic politicians, these individuals have come to blame immigration and the EU for many of their woes. According to this hypothesis, voters supported Brexit because they believe EU membership has contributed to their discontent with the status quo.

It is likely that both hypotheses played some role in the referendum outcome, but the existing evidence is insufficient to assess their relative contributions. When leave voters are asked to explain their vote, national sovereignty and immigration are the most frequently cited reasons, but these responses are consistent with either hypothesis. They could reflect voters’ attachment to the UK as a nation state, or they may mirror the language used by pro-Brexit newspapers and politicians. However, the hypotheses have quite different implications for how policy makers should respond to Brexit and for the future of European and global integration.

Brexit and the future of international integration

The nation-state hypothesis is closely related to Dani Rodrik’s idea that nation states, democratic politics and deep international economic integration are mutually incompatible. From this perspective, the deep integration promoted by the EU, in particular free movement of labour and regulatory harmonisation, cannot coexist with national democracy.

For Europe to remain democratic, either the people of Europe must develop a collective identity or the supranational powers of the EU must be reduced. However, the nation-state hypothesis does not directly threaten the sustainability of shallow integration agreements that aim to lower tariffs and border non-tariff barriers. The UK government’s “global Britain” approach to Brexit is based on the nation-state hypothesis.

The scapegoating hypothesis does not threaten the ideal of the EU as a supranational political project or provide an immediate reason to reconsider the desirability of deep integration. But it does pose a different challenge. As long as geography continues to be an important determinant of group identity, international institutions will always be more vulnerable to losing popular support than domestic institutions.

If the scapegoating hypothesis proves correct, policy makers seeking to promote European and global integration have two main options available. One option would be to channel popular protests against another target. Alternatively, policy makers could focus on tackling the underlying reasons creating discontent among left-behind voters. Addressing economic and social exclusion is a daunting challenge, but enacting policies to support disadvantaged households and regions and broaden access to higher education would be an obvious starting point.

Understanding and responding to the motivations of voters who oppose the EU and other forms of international integration will play an important role in determining the future of globalisation. If voters supported Brexit to reclaim sovereignty from the EU then, provided they are willing to pay the economic price for leaving the Single Market, they will view Brexit as a success. But if misinformation drove support for Brexit, then leaving the EU will do nothing to mitigate voters’ discontent.

By Dr Thomas Sampson, Brexit research leader at The UK in a Changing Europe and Assistant Professor in the Department of Economics at LSE. Dr Sampson will be speaking at our trade conference