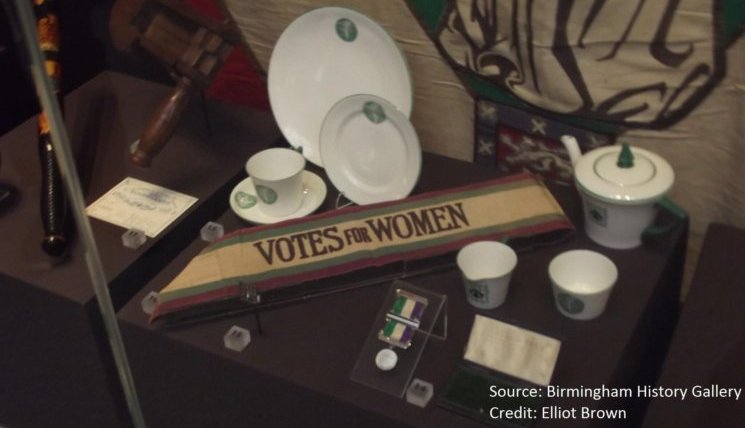 A hundred years ago yesterday, on 6 February 1918, the Representation of the People Act was passed, after a long and hard campaign by women activists. It allowed property-owning women aged over 30 to vote for the first time. Although it wasn’t until 1928 that the franchise was extended to all women, the 1918 Act opened the way to the political freedoms that we know today.

Since then, women’s political rights have advanced throughout the world, although many obstacles to full and equal participation remain. In Britain today, women are slightly more likely than men to turn out to vote.

But what has voting achieved for women? Celebration of the 1918 Act has taken place against a backdrop of disquiet and anger about the treatment of women at work and in public life, highlighted by the #MeToo campaign and the row over salaries at the BBC.

As Theresa May argued in Manchester yesterday, women are visible today in many high-profile jobs including the top of government itself, but remain under-represented in economic and political decision-making and are still often exposed to violence and intimidation when they speak up. Half of all women report having faced sexual harassment at work. Women are more likely than men to be engaged in unpaid or low-paid care work, and they bear the brunt of austerity.

On many important political issues, women’s voices are barely audible. This applies to what is possibly the most significant political decision today, regarding the future of the relationship between the UK and the EU.

Labour MP Seema Malhotra, a member of the House of Commons select committee on Exiting the EU, pointed out in September 2017 that the negotiating team and the ministers heading it are all men. This is not to say that individual women have not been influential: one of the most significant interventions to date has been that of Gina Miller, an independent businesswoman who used legal resources to force the government to consult Parliament before triggering Article 50. Her action galvanised Parliament to use its powers to hold government to account.

But there has so far been very little consideration in parliamentary debates of how Brexit will affect women. An exception to this was the Women and Equalities Committee which in February 2017 held an inquiry on how to protect equality law after Brexit. As the Withdrawal Bill makes its way through Parliament, MPs and Lords have sought to ensure that Brexit will not give rise to a bonfire of protective legislation.

Nevertheless, this falls short of specific embedding guarantees into the law, in order to protect the 2010 Equality Act. This is important because the 2010 Act brings together protections against discrimination in a comprehensive framework, including the advances which have been brought by European case law.

The EU has made clear that gender equality is a fundamental principle which must be upheld by the European Court of Justice and it is not clear how this overarching commitment will apply in the UK after withdrawal.

Little wonder that Sam Smethers, CEO of the Fawcett Society (named after one of the leading women in the suffrage movement 100 years ago), “the risk Brexit presents for women’s rights is real”.

The most controversial aspect of the Withdrawal Bill concerns the future use by government of so-called ‘Henry VIII’ powers to introduce regulations without presenting them to Parliament. Government has assured Parliament that it will not make any changes to existing “lightly” and that any major changes would have to be made by primary legislation.

However the House of Lords (where the Bill is currently at committee stage) in its reports pronounced itself dissatisfied with this response, and asked for more binding guarantees. It is not difficult to anticipate a scenario in which some politicians would seek to remove existing protection of working time and of part-time workers, the bulk of whom (89%) of whom are women.

As well as legal safeguards, these examples suggest the need for more robust and systematic gender impact assessment, and gender mainstreaming in any future new initiatives to tackle the economic and social consequences of Brexit. For instance, the government’s industrial strategy aims, among other things, to improve productivity by investing in skills training.

How much more effective gender equality initiatives would be if government paid attention to investing in girls’ educational and training opportunities, and to addressing the obstacles faced by these young women once they enter employment, as part of its wider strategy of investment in skills.

Instead, if we continue to wait for labour markets to change through pure aspiration, future generations will be having the same discussions about equal rights in another hundred years.

Finally, campaign groups and NGOs have been vocal in asking for guarantees that they will continue to receive levels of funding previously provided by the EU. More generally, it is striking that the referendum debates focused overwhelmingly on the costs to taxpayers of membership of the EU.

It was only after the result that the media started to talk about the loss to the British economy of EU support for research and innovation. The sector analyses published by the Department for Exiting the EU also refer to the extent of European funding in providing the R&D funding that allows the economy to grow and prosper.

There has, in contrast, been virtually no discussion of how funding will continue to support the already squeezed not-for-profit sector, not just in the “implementation” period after March 2019, but beyond.

In the 2014-2020 programme, the ESF and European Regional Development Fund are investing around €11.8 billion in projects around the UK, most of these helping disadvantaged young people acquire skills and access resources (including childcare) to enter the labour market.

All projects must now demonstrate how they integrate gender equality into their design and delivery. Thinking about Brexit also means planning for future services, how they will be funded, and how gender equality is built into funding decisions.

By Dr Susan Milner, reader in European politics, University of Bath. She is currently working with the University’s Institute for Policy Research on a project investigating policies for supporting women at work, in the context of the UK’s withdrawal from the EU.