Brexit Café in the East Midlands: conversations amid the confusion 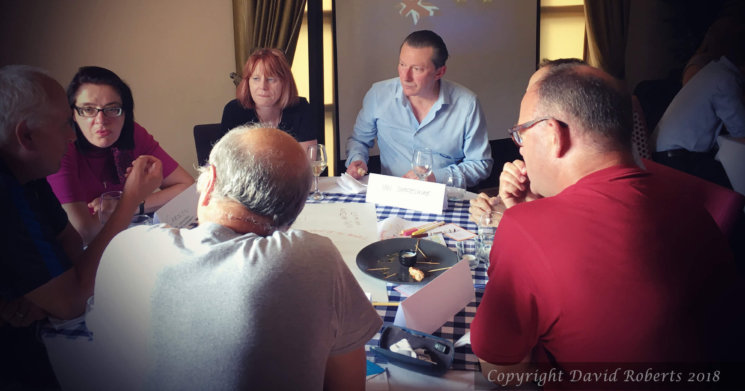 The 28+ Perspective on Brexit project, part of the UK in a Changing Europe initiative, organised a “Brexit Café” in the East Midlands, providing a platform for deep and meaningful conversations about Brexit for civil society stakeholders in the region.

Special guest was Rt. Hon. Nicky Morgan, MP for Loughborough. Away from the Westminster and Brussels bubbles, Loughborough University hosted this version of the World Café format, an event designed to facilitate respectful ‘conversations that matter’ amongst participants.

The participants were invited to discuss three questions in rounds of around 15 minutes each: What are your foremost thoughts about Brexit? How do you think Brexit will affect you professionally? And how do you hope the UK-EU relationship will look in five years’ time?

The “Brexit Café” adapts the world café model to encourage meaningful, calm and reflective conversations on Brexit, where participants are required not just to express their views, but to pay attention to others trying to join dots and create new patterns of thoughts.

It is designed to generate much needed calm debate and exchange of views in an issue that has certainly divided people across the country. At the end of the three rounds of conversations there is time for “harvesting”, so a common discussion of the most important ideas emerges that is then reproduced visually in flipcharts through doodles, post it notes or simple short messages.

Three words seemed to dominate the Brexit café in Loughborough: confusion, discussion and uncertainty. Participants in the event shared different views on Brexit, but most were worried by the uncertainty of what lies ahead.

A lack of clear political leadership to take the country forward was often cited as one of the reasons for that uncertain future. The disruptive nature of Brexit was also highlighted in the conversations amongst the participants, most of whom seemed to agree that there are still very divided and controversial opinions about Brexit around the country.

The economy, and in particular the East Midlands economy, was very much part of the debate. Here one could see a clear differentiation between small local business and larger companies with production plants and headquarters in the region.

The divergence concerned the perceived impact of Brexit on the economy. Whereas some participants argued that the globalised nature of the economy means Brexit will hit badly many of the local companies in the Midlands, others considered that the local economy is robust and diverse and should be able to survive in any event.

One point where both sides agreed, though, was the need for clarity to enable short and long-term planning and to avoid problems in the future.

One of the refreshing features of a (rather warm) evening was the development of deep and mature conversations around Brexit, with arguments both in favour and against it.

The Brexit Café format clearly favoured and facilitated much needed dialogue, which is in itself already a positive development. However, there was a clear feeling of anxiety, fear of the unknown and, to some extent, regret of what is happening around the country because of the Brexit referendum.

Looking into the future, participants tried to remain optimistic. Most were clearly in favour of a close relationship with the European Union, although there was no common agreement on what shape that relationship should take.

Beyond the vagaries of the economy, conversations about the future were underpinned by concerns about the divisions created in British society, future national identity and, especially, the impact that Brexit could have amongst the younger generation.

Rt. Hon. Nicky Morgan, MP for Loughborough, attended the Brexit Café and closed proceedings on the evening by thanking all the participants for their views and opinions. She highlighted that it is “very useful to listen to other people’s views as to why they voted the way they did”.

The point that struck her the most in the conversations was that “[our country] needs to be better in the future, whatever better looks like”. There is a need to engage in conversations about the shape of this future; at the moment, people do not to talk to each other and are stuck on their views about Brexit, Nicky Morgan added.

This edition of the “Brexit Café” demonstrated that the format adapted to the reality of Brexit by the 28+ Perspectives on Brexit project team is an innovative and different way of generating conversations on such a divisive issue.

As Nicky Morgan pointed out, Brexit is a topic on which real conversations that acknowledge others’ opinions do not always take place, and she added: “I wish we had events like this before the Referendum”.

By Dr Borja Garcia, Brexit research investigator for the 28 Perspective on Brexit team at The UK in a Changing Europe.