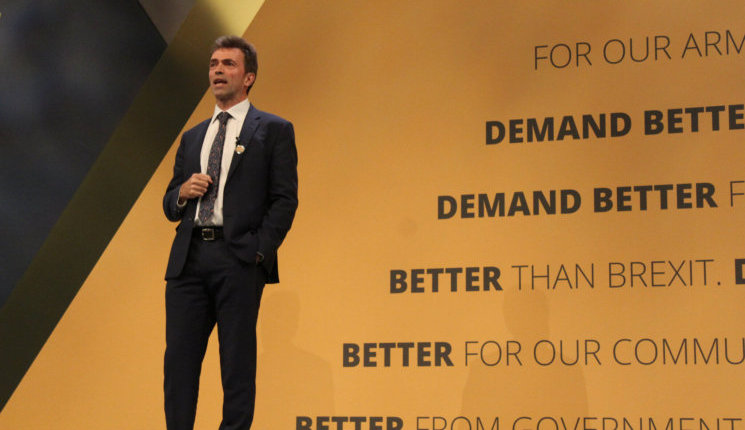 Everywhere we look, a destructive, selfish, chaotic and rudderless Brexit is wreaking havoc across the country. As ‘Brexit D Day’ inches closer, the papers are again filled with the latest act of sabotage from a hard Brexiter trashing the Chequers Deal.

We read the latest report of a business upping sticks and relocating out of the UK. We hear the latest warnings of the perils of No Deal, whether it involves stockpiling medicines or hindering access to expats’ pensions. And more people lose hope for the future of the country.

With Theresa May’s Chequers deal dead on arrival, the UK could career off the ‘No-Deal’ cliff in just a few months’ time.

In order to prevent a hard Irish border, avert a funding and staffing crisis for the NHS and to stop Britain being cast adrift from the global order, people must put their belief in another, more open, more positive way than Brexit.

The Liberal Democrat vision for a better Britain will be delivered by using the real Brexit dividend, the financial dividend liberated by cancelling Brexit, to free up cash to boost skills, training, education, infrastructure, housing, productivity in areas of greatest need.

But first we must give power back to the people, so that, if they want to, they can put a stop to Brexit. With a final say on the deal – a People’s Vote – they could choose to stay in the EU, and secure a future which offers more hope and demands better of government.  We could then start to tackle many of the reasons why people voted Brexit in the first place.

Instead the government are squabbling over how to secure new trade deals which won’t compensate for the loss of trade with the European Union or a new customs border which will make it costlier for UK businesses to import and export.

At a time when the country is on the brink of a precipice, we must demand better. The challenge now for the political parties and their leaders is to dare to give people a choice and a chance.

Minister or backbencher, Labour, Lib Dem or Tory, if an MP feels that Brexit will damage their communities they must come out and fight to stop Brexit. It’s no use toeing the party line when leaders are betraying their voters and damaging our children’s futures.

And if Jeremy Corbyn and Theresa May still choose to go down the Brexit path, hand in hand, ignoring the calls for a people’s vote, then MPs must go over their heads and work together, beyond party lines.

So to everyone who is disillusioned, feels betrayed and aghast at the direction Brexit is going, take a stand, lobby your MP and campaign like there’s no tomorrow.

There is still time to avoid the Brexit cliff edge and a dreadful economic crunch when we hit the rocks at the bottom.  Join the march on the 20 October in London and help us make history and secure a People’s Vote.  The government cannot remain deaf to the voices of hundreds of thousands of people.

By Tom Brake, Liberal Democrat MP for Carshalton and Wallington, and the party’s Brexit spokesman.