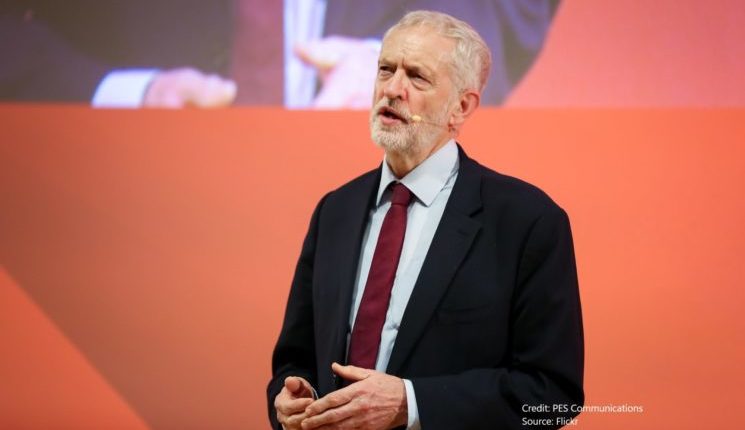 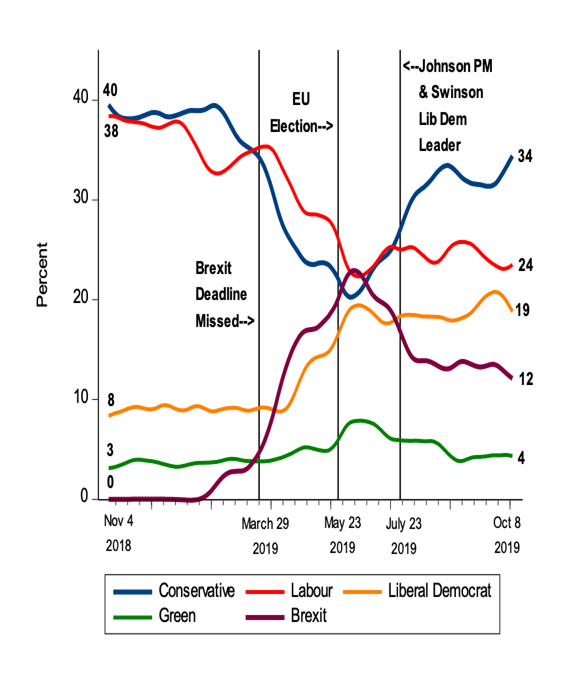 Treat all estimates with caution, though as always it is worth noting that were such numbers replicated at an election then they would likely deliver a small Conservative majority.

After looking at the Brexit Party vote last week, this week we turn to the noticeable decline in support for Labour since Boris Johnson entered Downing Street.

Jeremy Corbyn and Labour are averaging just 24% while the Conservatives have a 10-point lead.

Labour is not cutting through to voters while the Liberal Democrats are snapping at its heels.

So, at the moment it looks like Labour is going down to another defeat at the next election – and perhaps a bad one.

It is worth remembering that Labour has now not won a nationwide election for fifteen years.

One of the repeating patterns in Labour politics since the Second World War has been the party falling out with itself immediately after losing an election.

It happened when Aneurin Bevan, founder of the NHS, rebelled against the party leadership after Labour lost the 1951 election.

It then happened again after Mrs Thatcher defeated Jim Callaghan’s government in 1979, which led to a successful leadership bid by Michael Foot, the veteran left-wing MP.

The latest version of this repeating pattern followed the 2015 general election, when the outsider Jeremy Corbyn won the leadership contest.

His surprise victory sparked infighting among Labour MPs and the grassroots, although it did bring a rapid expansion in Labour’s membership.

Moreover, the party recovered in the 2017 election when Corbyn proved to be a real vote winner by running a stronger than expected campaign and helping to attract Labour’s highest share of the vote since Tony Blair’s second landslide in 2001.

As the chart above shows, at least until the first Brexit deadline in March of this year the two main parties, Labour and the Conservatives, remained dominant.

But this then dramatically changed, as Britain failed to leave the EU and the two-party system crashed.

This tells us that the explanation for Labour’s problems lies in more recent events than the usual post-election infighting.

First, when Boris Johnson arrived in Downing Street he boosted the Conservative Party vote from the low twenties to the low thirties.

This honeymoon period eventually stalled but it did open a significant gap between the two big parties. Labour’s support has essentially flat-lined over this period.

Johnson’s squeezing of the Brexit Party vote and his party’s improved numbers is one part of the story of Labour’s decline.

A second factor is the rise of the Liberal Democrats.

Jo Swinson and her party have been seriously boosted by their ‘Bollocks to Brexit‘ campaign and second place finish at the European elections in the spring. This cemented their appeal among Remainers.

Today, the Liberal Democrats are attracting 42% of Remainers compared to 18% before the European elections. This, in turn, reflects how their unequivocal anti-Brexit message has enabled them to exploit Labour’s ambiguity over Brexit and recruit Remainers.

Even this week, after the Labour conference and more than three years since the referendum, two-thirds of all voters agree that Labour’s position on Brexit “is a mystery to me“.

At a different time Labour’s strategy on Europe, once described by Harold Wilson as ‘riding two horses at the same time’, might have worked.

It hints at the need for compromise and to bring a divided country back together again.

The problem now for Labour, however, and as the European elections showed, is that public opinion is simply too polarised to make this work.

Corbyn has made a strategic error in refusing to acknowledge this fact.

The third and probably most important problem for Labour is the sharp decline in Jeremy Corbyn’s approval ratings.

As you can see below, during the 2017 election some 46% of our survey respondents approved of him but by early October 2019 this had crashed to about 19%, roughly the same as his rating immediately prior to the 2017 election.

This sharp decline in Corbyn’s popularity reflects a number of factors: continuing internal conflict in Labour; the scandal of anti-Semitism; and the sectarian attitudes of some far left activists who have damaged the Labour leader with their rhetoric and intolerance.

A ferocious smear campaign by conservative sections of the press has also helped.

Might Corbyn’s ratings improve as they did during the 2017 campaign? The answer is that we do not know.

But once the election is called we will find out pretty quickly if Corbyn can go head-to-head with Boris Johnson. 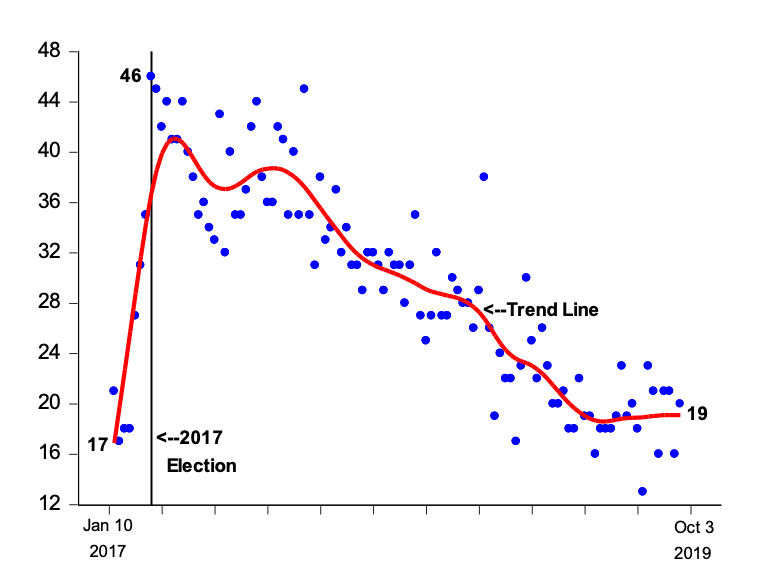 But another thing that is integral to this story is Corbyn’s dithering over Brexit.

About two-thirds of Labour voters in 2017 were Remainers while Labour Party members are, like Labour MPs, even more strongly pro-Remain.

But 60% of Labour seats in that election had voted Leave in 2016, introducing a tension.

While Labour voters in these seats were most often pro-Remain this spooked some Labour MPs into opposing a pro-Remain strategy. Are they right?

The figure below throws light on this question.

Each dot represents the 632 constituencies in Britain and the figure shows the relationship between the change in Labour’s share of the vote between the 2015 and 2017 elections compared with the percentage who voted Leave in each seat at the 2016 referendum.

Obviously, Brexit was very important in that election.

But the key question is did Brexit dominate to the extent that Remain Labour MPs who stood in seats which had voted Leave in 2016 were then punished by voters? 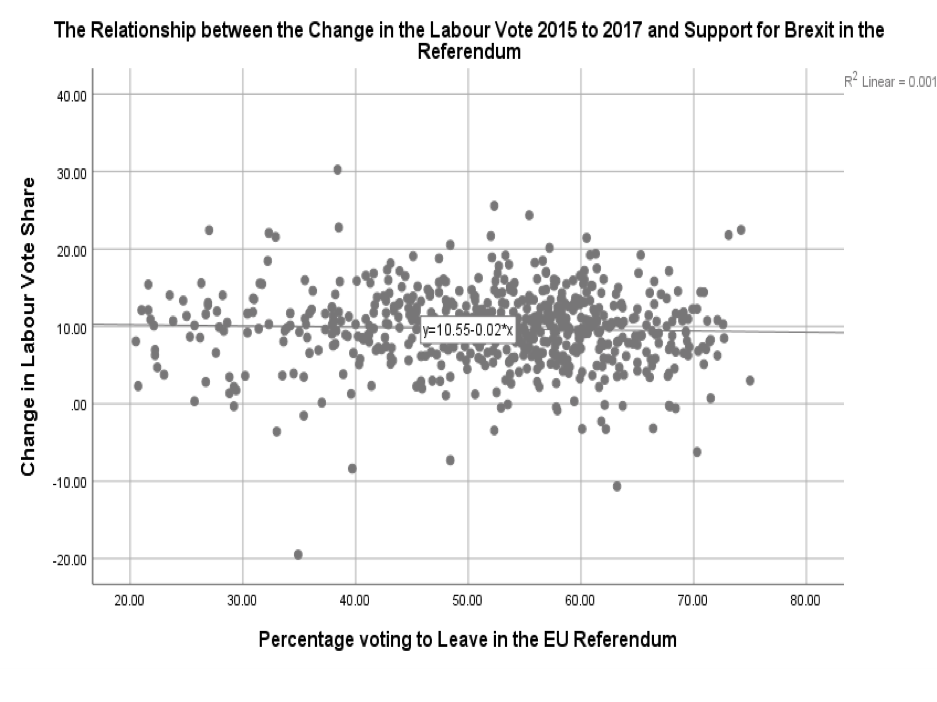 If Remain Labour MPs were punished then we should see the Labour vote increasing less strongly, or even decline, in seats that voted Leave, compared with those that voted Remain.

But in fact, and as the figure shows, there is no relationship at all between the change in Labour’s vote in 2015-2017 and voting Leave in 2016. We can tell this from the summary line which is flat.

If Labour MPs were punished for supporting Remain then this line would be declining, not remaining flat.

What does all of this mean?

It is hard to avoid the conclusion that Jeremy Corbyn has made the wrong call on this issue.

It is a fair bet that Jo Swinson and the Liberal Democrats would not be so close to Labour in the polls, and the Conservatives would not be so far ahead, if Labour had ‘got off the fence’ and transformed itself more fully into a party of Remain.

Whether or not this will change in the weeks and months ahead remains to be seen.

By Matthew Goodwin, Professor of Politics and International Relations at the University of Kent. You can follow Matthew Goodwin on Twitter using his handle @GoodwinMJ.