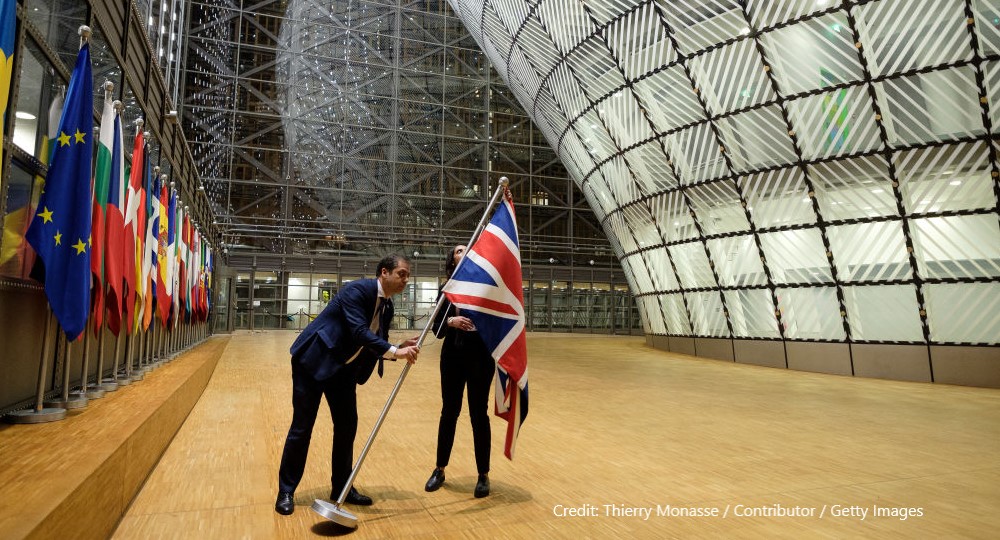 The UK’s decision to leave the EU has not only meant that it has lost one of its largest member states. Brexit has also left a mark on public opinion in the rest of the community.

Previous studies have shown that public support across the EU for leaving the bloc declined immediately after the Brexit referendum, but it has not been clear if these reactions have persisted.

Even though the referendum took place five years ago, negotiations with EU partners dragged on for years, with difficult bargaining rounds only completed in 2020.

In this context, it is important to examine the impact these protracted withdrawal negotiations had on longer-term public reactions to Brexit across the EU.

The UK’s difficulties in actually leaving the community might have lowered public claims for an EU exit outside Britain, and so we might therefore see a Brexit ‘learning effect’ that helps shore up public commitment to the EU in its member states.

Figure 1 portrays percentages of leave votes in hypothetical EU membership referendums over time. The graph distinguishes between longstanding member states, and those which joined more recently (the so-called ‘accession countries’). 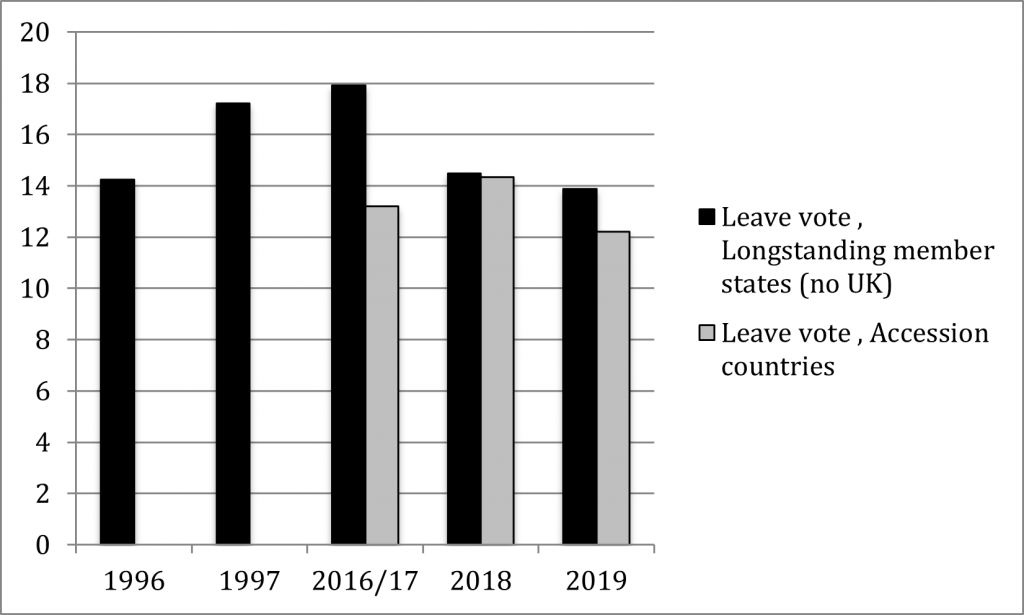 Drilling down into these trends in more details allows us to examine how the EU public relates their own preferences for leaving the EU to their opinions on Brexit. To investigate this, we analysed public opinion survey data collected in September 2018.

We ran statistical analyses to test for the correlation between respondents’ personal vote in a hypothetical EU referendum and their evaluation of the British exit decision. This allowed us to control for correlations between various socio-economic characteristics and political attitudes, and estimate the specific effect of each possible influence.

Generally, we found that respondents who consider Brexit to be the right choice for the UK were more inclined to vote for an EU exit for their own country.

Withdrawal from the EU was also (unsurprisingly) more popular among people who had a negative attitude towards the EU, and European solidarity more generally, and who rejected the Euro. Men are also more likely to be potential leave voters than women.

As the EU is a community of states which vary in many respects, it makes sense to examine patterns across different types of states.

As the EU went through several enlargement rounds following the fall of the Soviet Union, the duration of membership is likely to be key factor influencing the nature and extent of EU commitment among populations.

Figure 2 shows the difference between EU countries according to their length of EU membership.

We can see that the effect of respondents’ evaluations of Brexit on willingness to leave the EU is stronger in countries with a shorter EU history – as is the perceived benefit accruing from EU membership. 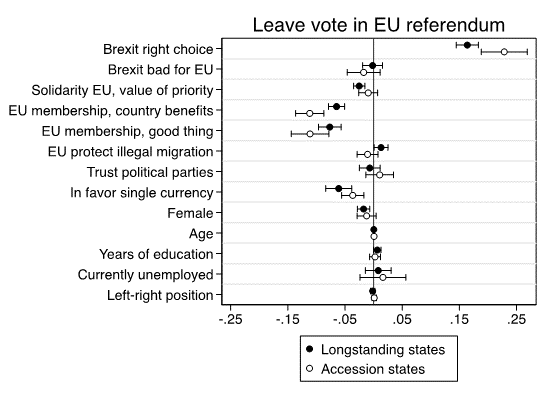 So what do our findings tell us about the longer-term effect of Brexit in EU member states?

Brexit evaluations are not fixed and can change depending on current political events occurring in the UK or the EU. So if the UK fares comparatively better than its former EU partners, the desire to break away from the community might grow.

This is particularly the case in eastern EU countries, where populations have a tendency to evaluate the EU more in terms of current cost-benefit calculations than community support built up over a substantial period of time.

The current Covid-19 crisis offers a first test case for this assumption.

The faster progress of vaccinations in the UK might make leaving the community more attractive in the eyes of some EU citizens, especially those in eastern Europe.

It is interesting in this respect that public opinion data from spring 2021 show that satisfaction with the EU declined across the community because of perceived weak crisis management and comparatively slow roll-out of vaccinations.

Such concerns might fade, of course, as some semblance of normality resumes, and even in this recent survey EU citizens still saw the need for more EU-wide cooperation in the future – a positive signal for the community and political elites in Brussels.

Time will tell as to whether future comparisons with the UK’s exit experience continue to shape public commitment to the EU.

By Ann-Kathrin Reinl, researcher at Ludwig-Maximilians-Universität (LMU) München and Geoffrey Evans, Professor of the Sociology of Politics at the University of Oxford. This blog presents findings taken from a newly published paper in Political Research Exchange, available here.