When politicians fail to bring peace to their society ravaged by the forces of bloody conflict they always blame ‘the people’, saying they wanted a deal that would bring peace but that ‘their people’ could not accept it.

Most of the time such claims are lies: people generally do want peace and all the benefits that flow from it, and the problem really is that the peace deal ‘on the table’ is not in the interests of the political elites and their allies charged with negotiating a peace agreement. Is Brexit any different?

This is an empirical question. What compromise on Brexit could the people of the United Kingdom accept, given the political will of their leaderships to take them down that road?

In my first Brexit pilot peace poll I tested the views of Leavers against Remainers using the conflict resolution techniques that worked so well in Northern Ireland.

But in the UK it is not the Protestant/Unionists and Catholic/Republicans that have to make peace, it is the Conservative and Labour Party supporters.

So in my second Brexit pilot peace poll I asked what political party the informant generally supported in addition to their preference about leaving or remaining in the European Union.

Table 1 shows the support among Leavers and Remainers for eight different options (the PM’s Withdrawal Agreement, no deal, a permanent customs union, a Norway-style deal, a Canada-style deal, remaining in the EU, a compromise agreement, and a ‘People’s Vote’ referendum); and Table 2 does the same for Conservative and Labour Party supporters. 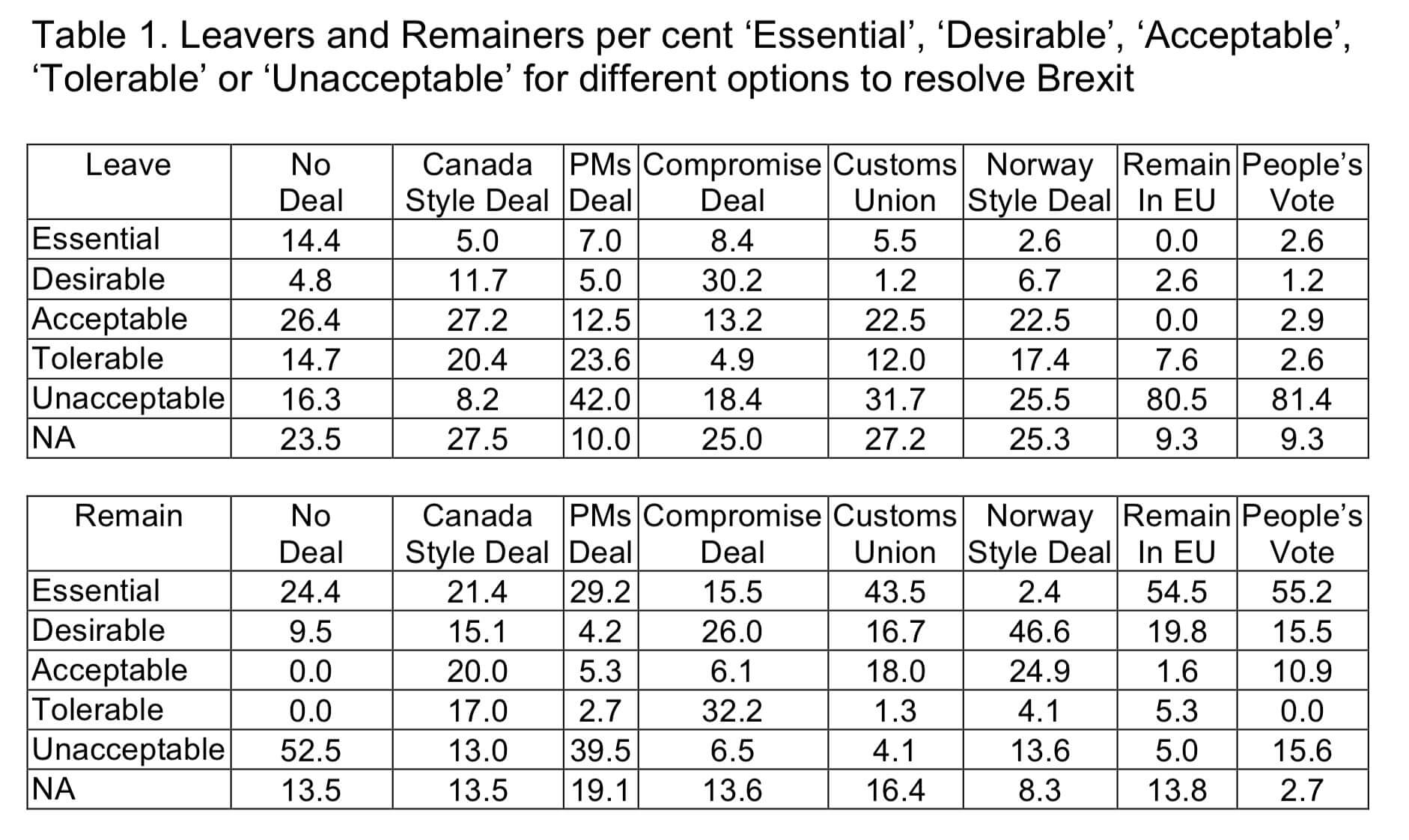 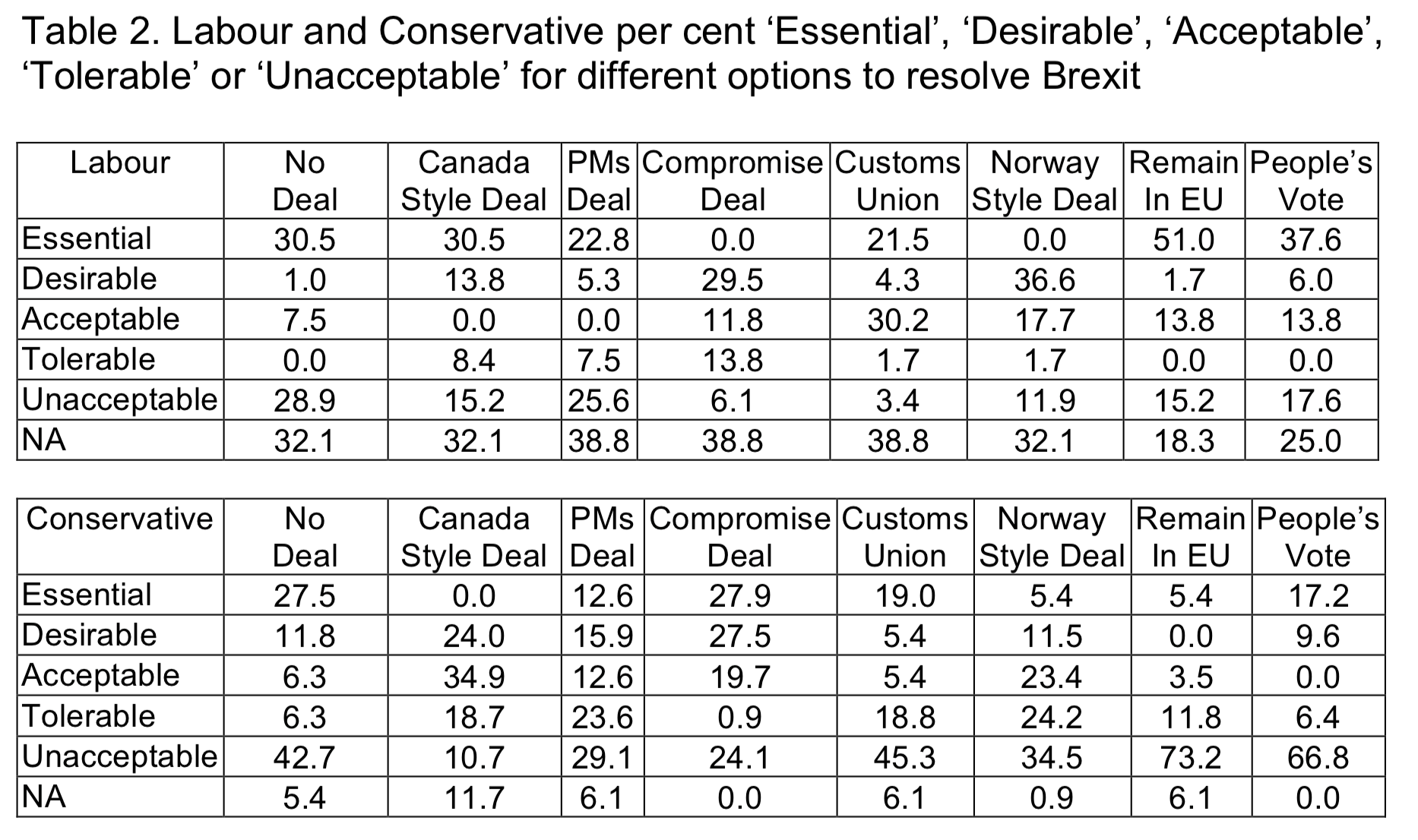 As with the first pilot the individual results cannot be taken too seriously as the sample contains only one hundred interviews using Google Surveys and the level of ‘no answer’ is rather high.

But this problem can be mitigated by not looking at the raw per cent results but rather at the rank order of the results.

In my experience when working on conflicts these rank orders do not change very much between small and larger – and more difficult to get – samples, providing they are representative of the groups being compared.

The rank ordering is shown in Table 3, for Conservative and Leave voters and for Labour and Remain voters – and the results are very revealing. 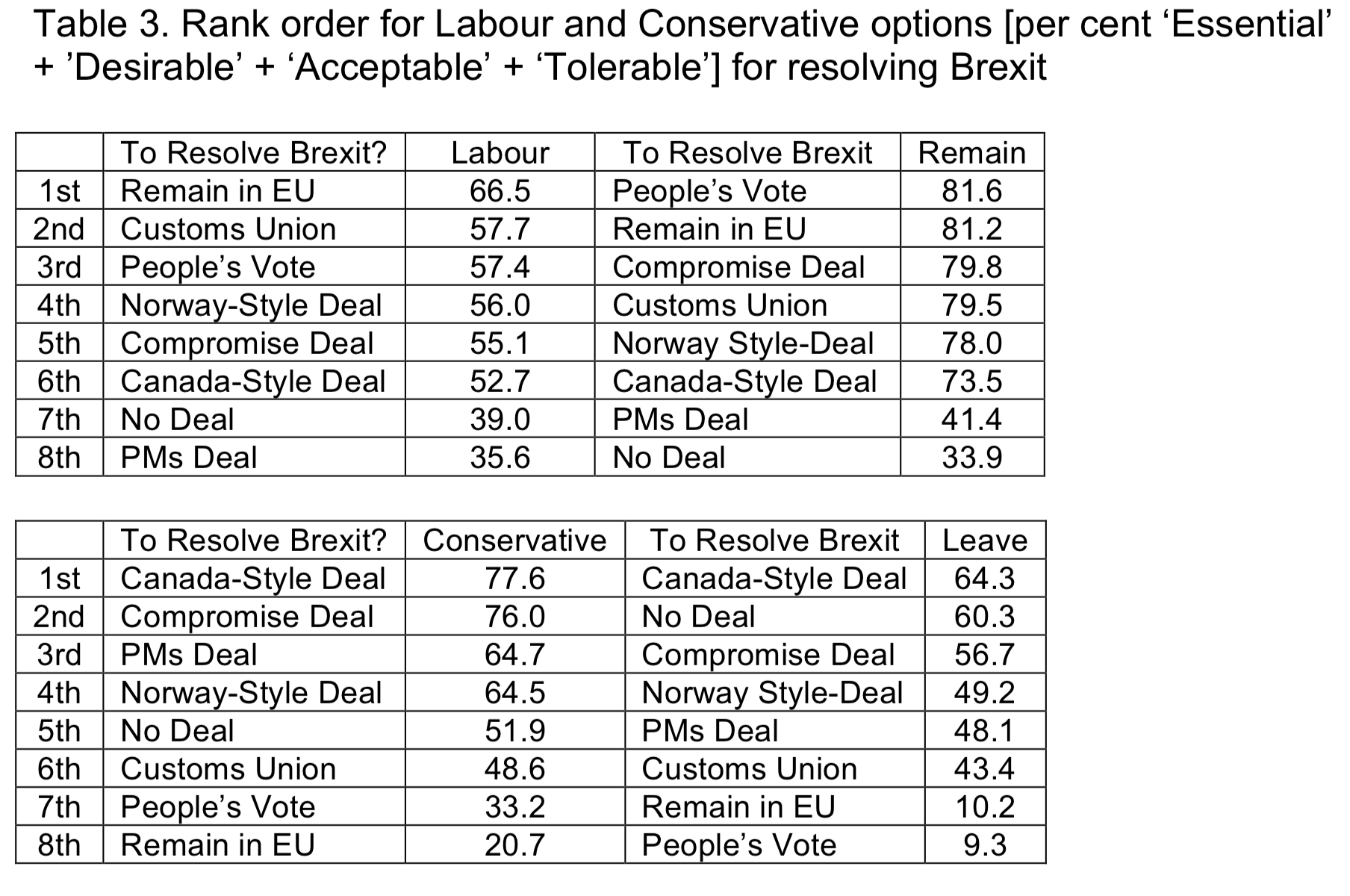 For the Labour party supporters the top three priorities are ‘remain in EU’, ‘a customs union’ and a ‘People’s Vote’, with a ‘Norway-style deal’ and some sort of ‘compromise deal’ fourth and fifth.

The pattern of the rank order for Remainers is almost identical with a ‘People’s Vote’ and ‘remain in EU’ first and second but with ‘a customs union’ now down to fourth.

This is perhaps because, for Labour voters, ‘a customs union’ is party policy, and so it is second on their list.

Significantly ‘no deal’ and the ‘PM’s Deal’ are at the bottom of both the Labour party and Remainers lists, with a ‘Canada-style deal’ just above them at sixth position.

However, a ‘Canada-style deal’ is first on both the Conservative and Leave lists – this being the preferred option for so-called hard line Brexiters. So not much chance of a compromise there.

But the second choice for Conservatives is a ‘compromise deal’, and for them this would be the ‘PM’s Deal’ third or a ‘Norway-style deal’ fourth.

Interestingly the ‘PM’s Deal’ drops to fifth place in the Leavers’ list as they are not always, loyal Conservatives, and hard line Leavers are content with ‘no deal’ which is second on their list behind a ‘Canada-style deal’.

Interestingly Grant, Rohr, Howarth, Lu and Pollitt come to essentially the same conclusion in their study of these issues using a cost benefit analysis approach.

Given that these rather different methodologies come to the same conclusion perhaps the results of these analyses should be taken more seriously as a solution to the Brexit problem now.

From a conflict resolution perspective, in a ‘fighting killing war’ this strategy probably would not work as we could not expect the parties to that war to respect the result.

But it might work for Brexit. Certainly it is worth a try, and if it doesn’t work and if everyone is still dissatisfied with the result then they can always fall back on the ‘Norway-style deal’ compromise.

This Brexit Pilot Peace Poll was collected between 17 February and 19 February, 2019. The full data files for all three of these polls are available here.

By Dr Colin Irwin, research fellow at the University of Liverpool.