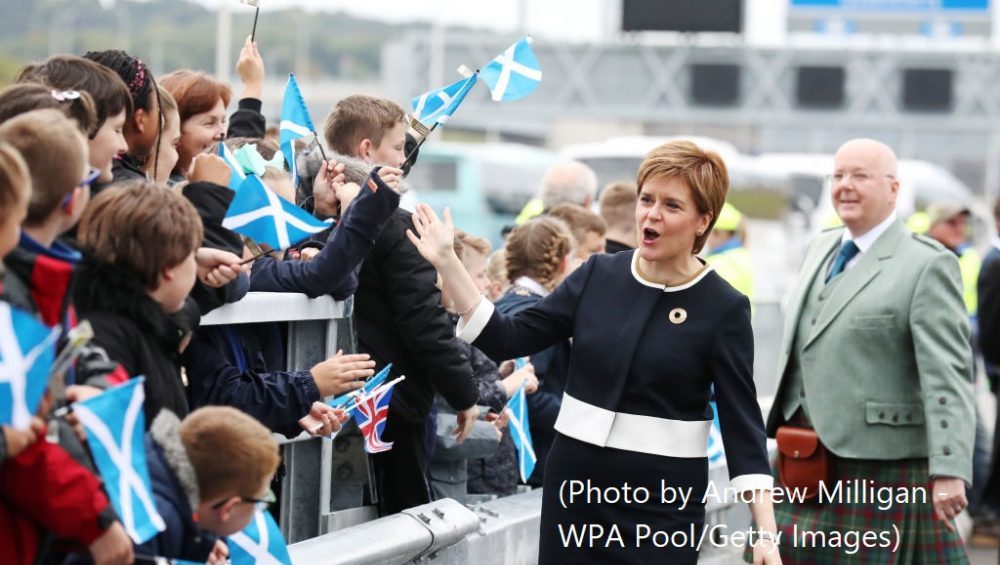 Less than two years after the 2014 independence referendum, which saw 45% vote Yes to Scotland being an independent country and 55% vote No, the Scottish National Party was re-elected to a third term of office.

Its manifesto asserted the right to a new referendum on independence ‘if there is clear and sustained evidence that independence has become the preferred option of a majority of the Scottish people — or if there is a significant and material change in the circumstances that prevailed in 2014, such as Scotland being taken out of the EU against our will.’

Within two months, the Brexit referendum produced that material change. 62% in Scotland voted remain. The Scottish Government’s calls for a soft Brexit or, failing that, bespoke arrangements for Scotland to remain closely embedded within the EU internal market, had no influence on UK Brexit policy. Scotland left the EU and its internal market ‘against our will’ along with the rest of the UK.

In 2020, the second condition was arguably also met. By the beginning of the year, support for independence had increased to around 50%, primarily driven by Remainers.

Against the backdrop of Covid-19, support has increased further. From June-December, 16 opinion polls carried out by six different polling firms all suggested majority support for independence, ranging from 51% to 59%.

This is the most sustained support for independence ever seen. Scotland thus enters 2021- an election year — with its constitutional future once again at the forefront of political debate.

The SNP has been in power for 14 years. Every opinion poll suggests that it is on course for another convincing victory in the Scottish Parliament elections in May, potentially winning an overall majority.

This would be a remarkable achievement in a five-party system, under an electoral system not expected to produce single party majorities.

Five months is a long time in politics, and much can intervene to alter the course of public opinion. Internally, the party is struggling to contain factionalism. Externally, well: events, dear boy, events.

But the SNP has the advantage of facing a divided opposition with no prospect of mounting a serious
challenge, individually or collectively.

Moreover, the constitutional cleavage pervades both political debate and political behaviour in Scotland. And while the SNP is not the only pro-independence party — the Scottish Green Party also favours independence — it can stake a claim that its electoral fortunes alone will reinforce the mandate for an independence referendum.

The challenges facing governments everywhere as a result of Covid-19 may not seem conducive to the radical constitutional overhaul that independence implies.

But Nicola Sturgeon’s speech to her party conference last November presented independence as a means to empower Scottish institutions to meet the challenge: “Independence is not a distraction from the task of post Covid-19 reconstruction.

It is essential to getting it right”. This speaks to the higher levels of trust poll after poll has indicated Scots invest in the Scottish Government and First Minister compared to the UK Government and Prime Minister.

But independence advocates must address new challenges. The constitutional authority to hold an independence referendum on similar terms to the 2014 vote lies with Westminster.

Whereas David Cameron willingly negotiated the transfer of power that facilitated the 2014 referendum, both Boris and his predecessor rejected similar requests, on the basis that the UK Government will ‘uphold the decisive verdict’ from the 2014 vote.

While that oft-repeated line may be tested by an overall SNP majority in May, the PM would be under no legal obligation to change course.

Brexit has undoubtedly raised doubts over the UK’s constitutional future, but it also creates new challenges for the independence project. The SNP seeks an independence that would enable its reentry into the EU while  maintaining close links with the rest of the UK in a ‘partnership of equals’.

But Brexit means that, after independence and EU accession, the Anglo-Scottish border would become a border between the EU and a third country.

It is reasonable to assume that Scotland would, like Ireland, secure a derogation from the Schengen Agreement to permit the continued free movement of people across these islands.

However, the Scottish Government would have to demonstrate that goods and services entering the Scottish
market complied with EU rules.

Under any scenario, that would require a new system of border management, combining technological surveillance, office-based bureaucracy and at least some physical border checks.

Independence could thus generate additional barriers to trade across the Anglo-Scottish border just as it opens up trade and mobility with the EU.

The closer the alignment between the UK and the EU, the more feasible it would be to combine Scottish independence within the EU with fluid borders with its closest neighbour, with minimal need for customs and regulatory checks.

However, the UK-EU Agreement is a thin deal. Avoiding tariffs and quotas on goods does not avoid new non-tariff barriers, including rules of origin requirements, sanitary and phytosanitary checks, customs’ declarations and the need to demonstrate regulatory compliance for goods and services traded across the border.

All of this points to a tighter set of border controls between Scotland and the rest of the UK in the event of independence leading to Scotland’s EU membership.

Maintaining such a system would require cross-border cooperation, with opportunities for partnership. But it could make it considerably more difficult to establish co-governance of shared services (for example, in energy, social security, research funding, civil aviation, etc) as was envisioned as part of the ‘independence-lite’ prospectus that underpinned the 2014 referendum.

Quite how these complexities, once subject to scrutiny, affect support for independence remains to be seen.

The right to self-determination, and to empower a government to act according to the interests and preferences of the people of Scotland, are powerful drivers of independence claims. All else may turn out to be embellishment and detail.

By Professor Nicola McEwen, senior fellow at the UK in a Changing Europe. This piece comes from our Brexit and Beyond: the union report.