Brexit: instability and stagnation at Stormont 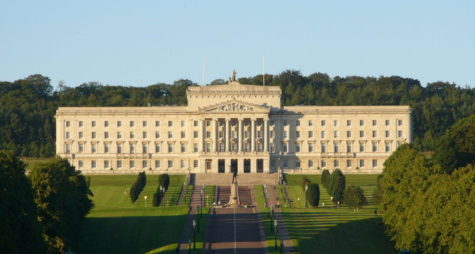 In uncertain times – indeed, perhaps at any time – in Northern Ireland, the most secure ground for politicians is not at the centre but closest to their respective hard lines.

The shockwaves caused by the result of the referendum in June 2016 have had particular intensity in the region, and the subsequent retreat to the familiar territory of ‘unionism’ and ‘nationalism’ is as unsurprising as it is regressive.

As such, the hiatus in devolved government came at the worst possible time. The two largest parties – Irish nationalist Sinn Féin and the Democratic Unionist Party (DUP) – remain profoundly polarised.

The political vacuum in Stormont arose primarily in response to a home-grown crisis. Sinn Féin walked out of the Executive in January 2017 in anger at the DUP’s handling of the Renewable Heating Initiative (RHI).

But by making its return to power-sharing conditional on a new status for the Irish language, it sought to extract a symbolically-important act of ‘recognition’ from the DUP. Such is the state of subnational government here.

Any agreement to restore power-sharing was made all the more difficult to achieve by the context of Brexit. The very divisiveness of the issue meant that it was removed from the table as a topic for negotiation; this is because Brexit has ramifications for the very core of unionist/nationalist division: the Irish border.

The results of the two snap elections in Northern Ireland in 2017 also reflect this schism. Both the Assembly election on 2 March and the general election of 8 June affirmed the north-east and southwest territories of DUP-dominance and Sinn Féin-dominance respectively.

Sinn Féin is strong in all the constituencies that run along the Irish border, where many of its supporters see Brexit as a material as well as ideological threat. In fact, there was an overall growth in votes for Sinn Féin in both elections, and a corresponding loss of the unionist majority in the Assembly.

This should not be interpreted as a surge in support for Irish unification – no poll or survey conducted so far has indicated such a trend. It is instead a reflection of the game-playing voters are forced into, especially during times of uncertainty.

In both elections, turnout increased to 65% (about 10% higher than usual). The electorate is agitated and determined not to let the ‘other side’ exploit the situation to change the status of the Irish border.

Elections in Northern Ireland bring a whole spin to the phrase ‘negative politics’. It is best, therefore, not to read the results as demonstrating huge passion for Sinn Féin and the DUP. Rather, Sinn Féin and the DUP are the parties people feel most strongly antagonistic towards, largely based on fear of that party’s view of the Irish border being imposed on Northern Ireland.

Only Sinn Féin and the DUP are seen as strong enough to counter the weight of the other. As such, moderate voters will vote Sinn Féin if it means keeping the DUP from winning a majority in their constituency, and vice versa.

Of course, the debate about Brexit has been conducted primarily in terms of high rhetoric and binary choices across the UK. This has particularly destructive consequences in Northern Ireland that can only be understood in light of the 1998 Belfast (Good Friday) Agreement.

The success of the 1998 Agreement lay not in resolving the border conflict but in making the border issue simply less important. Facilitated by common EU membership, the depoliticization and ‘normalisation’ of cross-border movement in Northern Ireland has been a vital part of the peace process.

As Michael Keating points out in Brexit: Local and Devolved Government, the process and outcome of leaving the EU are inherently disruptive to the fragile constitutional settlement between Scotland and the rest of the UK. The same is true in Northern Ireland.

More particularly, the very notion of having to decide between being closer to Great Britain or to the Republic of Ireland contravenes the logic of the 1998 Agreement, which sought to accommodate ‘both’ British and Irish through institutions that cooperate across unionism and nationalism, the Irish border, and the Irish sea.

Counter to UK decentralisation and the multi-level governance model of the 1998 Agreement, Westminster is now very much the locus for decision-making regarding the UK’s future.

Given the stark implications of Brexit for the Irish border, the centrality of UK-Irish relations for the 1998 Agreement, and the symbolic as well as legislative value of the devolved institutions, Stormont is uniquely affected by the outcome of Brexit; and yet it stands silent on the matter.

Who, then, represents Northern Ireland? The UK and EU made welcome commitments in the Joint Report of 8 December that were specifically designed to limit the potential damage of Brexit to Northern Ireland’s economy, the 1998 Agreement and the peace it underpins.

Given the limitations of free trade agreements and bilateral arrangements, the means of meeting these commitments either lie in ‘specific solutions’ for Northern Ireland or in ‘full alignment’ with the EU Internal Market and Customs Union rules for the whole of the UK.

Both options could see new scope and responsibility for Stormont. And both options are vocally opposed by the pro-Leave DUP, which is, quite logically, making the most of the privileged position it secured via the confidence-and-supply agreement with the Conservative Government.

In the meantime, in the absence of a First and a Deputy First Minister, Northern Ireland has been represented on the Joint Ministerial Committee (European Negotiations) by senior civil servants – a lost opportunity for political strategy, communication and influence.

The stakes could not be higher for Northern Ireland and yet its political representation in the Brexit process could hardly be any more imbalanced, inadequate or ill-equipped for the task.

By Dr Katy Hayward, Lecturer in Sociology at Queen’s University Belfast. You can find a full copy of our Brexit: Local and Devolved Government report here.