Brexit is where Scottish and English nationalism meet 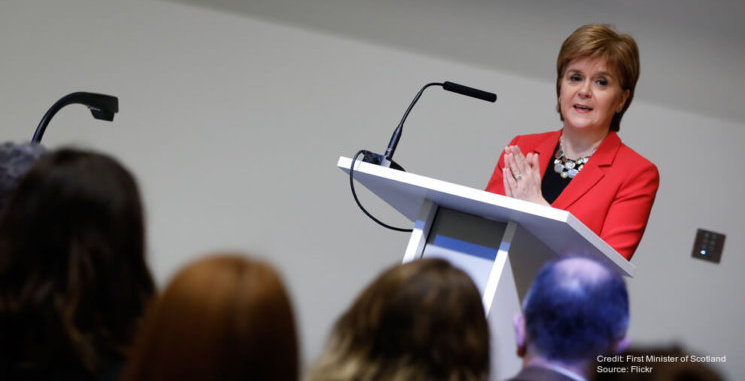 Brexit is where Scottish and English nationalism have met. It has been replete with irony. The Scottish National Party (SNP) make pro-union arguments they dismissed in 2014; UK-focused Brexiteers cannot see the similarity between their sovereignty demands and Scottish nationalism.

But it’s not been an easy encounter. Relations between Whitehall and the Scottish government have been strained and, although public opinion on independence has not shifted (a recent, cleverly worded, poll showed 60% support for Scotland ‘remaining’ in the UK), the two nationalisms combined could still threaten the stability of the UK union.

The politics are easier to understand than the devolution consequences. The SNP’s objective is ‘independence in Europe’. Its leadership campaigned for Remain, in line with the (now nearly two thirds) balance of Scottish opinion.

But its supporters are divided: perhaps 40% of Scotland’s million Leave voters were nationalists. Nicola Sturgeon aims to supplant Labour as the natural party of government in Scotland, and assumed disappointed Remain voters would flock to independence.

They haven’t, so her immediate demand for another referendum fell flat. Despite demands from an insistent nationalist base to set a date for ‘indyref2’, Sturgeon prevaricates: wait and see how Brexit turns out, she tells them.

It’s a fair response: the terms of Brexit matter. EU membership was always a safety net for independence, reducing the disruption from splitting the UK economy.

But if the UK is outside the EU’s regulatory or customs borders, an independent Scotland (hypothetically an EU member) faces border checks, even tariffs, across Hadrian’s Wall. That’s Northern Ireland’s problem, but with no Irish backstop.

Given the integration of Scottish and English economies, it’s potentially catastrophic for Scottish trade and employment. Hence Sturgeon’s prevarication, and the range of options she advocates.

Scotland alone should remain in the customs union and single market, with a special deal like Northern Ireland; or the whole UK should do so; or it’s time for another vote. The first of these ideas is a non-starter and anyway does not solve her border problem.

The second is Sturgeon’s favoured outcome: it would likely mitigate the economic effects of Brexit, the safety net for independence is still there, and rejoining the EU is one more argument for independence.

A People’s Vote would arguably be a win for Sturgeon either way: it either restores the status quo, or visits another English outrage on Scotland. Whatever, her Westminster MPs will reject Theresa May’s deal.

The SNP are a devolved government as well as independence campaigners, and much of the argument has been about how Brexit affects the UK’s territorial constitution. This has been multilateral – Wales is equally affected – and messy.

Much of the mess is down to mistrust. Sturgeon’s kneejerk indyref2 demand set a confrontational tone. So did the UK government’s first reaction, that all repatriated EU powers, even devolved ones, should initially reside in London.

This failed to recognise that, even though it’s awkward in a Brexit context, devolution was an established part of the UK constitution, not something to be amended at will. Both these immediate reactions were driven by competing claims of sovereignty.

This squabble was unnecessary and unhelpful. After a while, the UK government shifted to propose instead a power in the Withdrawal Bill for temporary reservations of EU law while replacement UK frameworks were sorted out.

The Welsh Assembly government – equally incensed over the principle – accepted this compromise. Sturgeon (overruling her Minister who negotiated the deal, it is said) however refused Sewel consent for the Withdrawal Bill.

As a result, competing Scottish legislation seeks to preserve ‘EU retained law’ for devolved matters in Scotland. If that Bill survives Supreme Court scrutiny, the courts will face a legal mess: two Acts trying by different routes to achieve the same result.

This particular ‘constitutional crisis’ may fizzle out anyway as, given how Brexit may turn out, reserving orders may never be needed. But its consequences remain: not just the mess of competing laws, but in enacting the Withdrawal Bill UK Ministers overrode the (Sewel) convention of not altering Holyrood’s powers without consent.

This feels like a failure of statecraft on both sides.

It does depend how Brexit turns out. But unless the UK crashes into a no-deal departure, the devolution consequences look less than they once did. During a transition period, little changes.

If May’s deal were to survive Parliament, and her political declaration gets implemented, the UK would remain very close to the EU, retaining, by one means or another, much EU law, say on state aid, public procurement or environmental regulation.

The EU obviously wants a Common Fisheries policy too. We’d be even closer if, as Sturgeon wishes, the UK is in the customs union and single market.

Legislation will have to incorporate these new European constraints into the architecture of the devolution settlements in a way that creates the minimum friction: best to use the courts to manage the boundary, as they do with EU law today.

We might expect greater devolved freedom on agriculture, and a new UK regional economic development policy. So the immediate changes might be more whimper than a bang.

The aftershocks could be more serious. Embedding a new European relationship into the devolution settlements might be hurried and messy. Whitehall will likely make the same mistakes as in the Withdrawal Bill, seeking to maximize Ministers’ powers but actually maximizing their problems.

The devolution settlements will look more uncertain as these discussions proceed, though there may still be opportunities to strengthen them, and the Sewel convention, previously overridden, may need to be bolstered.

Scottish and English interests might diverge over regional policy, agriculture or fish, and the SNP will take every chance to use differences to bolster the indyref2 case.

In the meantime, however, Sturgeon is on manouevres, presenting the SNP as a leftist ally in Westminster while trying to destroy it in Scotland. Such a marriage of convenience, rejecting May’s plan and hoping to trigger an election or impose an alternative solution, could only be temporary.

Labour needs Scottish seats to have a realistic chance of a majority. The price of longer term SNP support would be indyref2: an SNP referendum win then spells the end of Labour government.

Jeremy Corbyn might reflect on the big lesson of David Cameron’s premiership. Don’t agree a referendum that will cost your job if it goes wrong.