Brexit, migration and the labour market

What do today’s labour market statistics tell us about what’s going to happen to the UK labour market as a result of the referendum result? On the face of it, not much. The headline figures for employment, unemployment and so on are based on Labour Force Survey data for the months for April to June (and the changes are calculated with respect to the three months prior to that). The “single month” statistics do show a small uptick in unemployment (from its April low of 4.8% to 5.1%) – but these numbers are volatile, which is why the ONS doesn’t use them as the headline.

However, there is actually some post-referendum data in the release, on Jobseekers’ Allowance (JSA) claims. After several months in which JSA claims have been relatively flat, in July they actually fell. Perhaps even more interesting are the figures for “inflows” and “outflows”. As my former DWP colleague Bill Wells has noted, UK recessions seem to manifest themselves more in job separations than in new hires (that is, any rise in unemployment comes, arithmetically, mostly from more people being fired rather than fewer people being hired). In fact the number of new claims for JSA fell to a historic low in July. While this reflects in part the long-delayed roll-out of Universal Credit, it is hard to see anything in this data to suggest that the labour market slowed much in July.

And what about migration? Again, there is no post-referendum data in today’s release (and nor will there be in the Quarterly Migration Statistics released next Thursday). However, today’s data shows that in the last quarter, essentially all the increase in employment was accounted for by foreign born workers; the number of UK-born workers was flat. Non-UK born workers now make up just over 17% – more than 1 in 6 – of those in work. 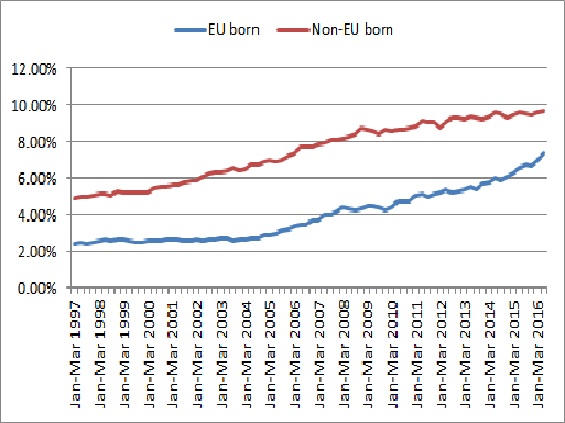 Over the past year (since these statistics are not seasonally adjusted, it’s better to look at the annual change)  the total increase in employment has been just over 610,000; of this, the UK born account for about 250,000, EU (non-UK) born for 280,000 and non-EU born for 80,000.  For the umpteenth time, this does not, repeat not, mean that more than half of all “new jobs” went to foreign-born workers. As the ONS say:

Still, one thing today’s figures may give us is the “high water mark” for the impact of EU migration on the UK labour market. I have always been very reluctant to make forecasts about migration flows – it is exceptionally difficult for a number of obvious practical and methodological reasons. Also, of course, such forecasts tend to be misrepresented, deliberately or otherwise, as the famous “13,000 EU migrants” case shows. Nevertheless, I am prepared to say that I would expect to see a sharp fall in net migration from the EU over the next year, for several reasons:

What will this mean in terms of numbers? This will depend crucially on economic and labour market developments over the next few months. But I’d be surprised if net migration from the EU were running even at half its current level in a year – and it could be much less.  It would, of course, be hugely ironic if it was the referendum result – rather than any change in policy – that led to the government hitting its “tens of thousands” target.  Equally ironic, but much more serious, will be the economic consequences. The fiscal impact of a large fall in EU migration for work purposes will make the post-referendum hole in the public finances even bigger.

By Jonathan Portes, senior fellow UK in a Changing Europe and principal research fellow at the National Institute of Economic and Social Research. This piece originally appeared on NIESR’s site.