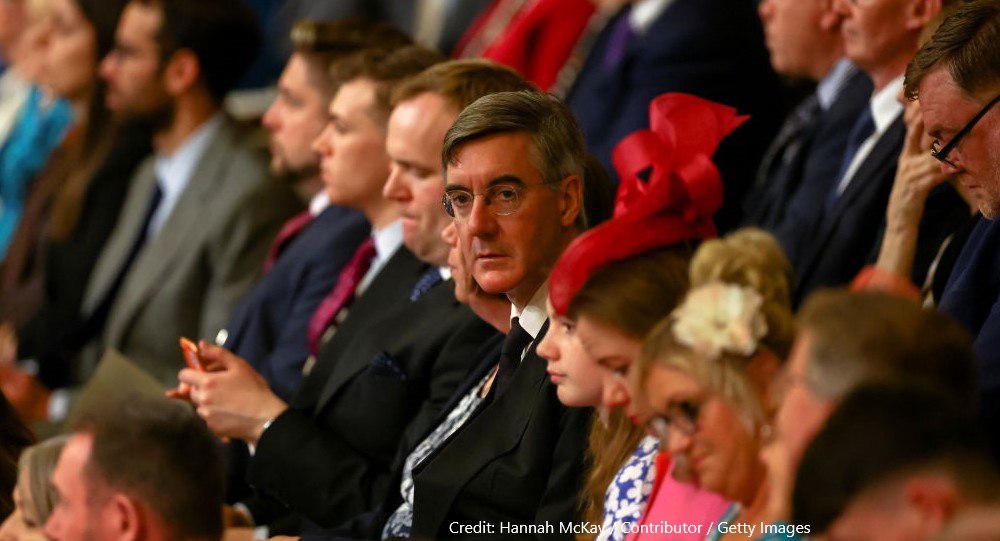 One hat is labelled Brexit Opportunities – the leftovers of David Frost’s operation when responsibility for the Trade and Cooperation Agreement (TCA) and the Withdrawal Agreement moved over to Liz Truss in the Foreign Office when Frost walked out. The other is labelled Government Efficiency – harking back to the days of Francis Maude in the Cabinet Office when he set up an alternative centre to push a hands on efficiency agenda beyond Treasury focus on headline spending totals.

Earlier last week, Rees-Mogg was offering up Brexit opportunities in the Queen’s Speech.

On Friday, he switched to his role as hammer of the civil service, promising 20 per cent cuts to take the civil service back to its pre-Brexit, pre-Covid numbers. Even that would be higher than the Cameron-Osborne government would have wanted to see in the early 2020s – they were targeting further reductions over their second term before the referendum result terminated their administration so brutally.

Rees-Mogg is right that the combination of Brexit and Covid ushered in a jobs bonanza in the civil service. Promotions abounded in a ‘wild west’ of opportunities for the ambitious to move in, on and up, turbocharging churn.

He is also right that many of the jobs needed to manage the pandemic day-to-day are no longer needed as we learn to live with Covid.

But he should take care that his axe does not leave a state that struggled to cope with the onset of the pandemic as lacking in resilience as it was before. The Covid inquiry is just beginning, but it may well find that the government needs to invest more in preparation and readiness for crisis management in quiet periods, rather than just push the panic recruitment button as soon as the alarm bells start ringing.

His view on Brexit should be much more nuanced. In the gap between the referendum and Brexit happening, there were three big drivers of activity: negotiating, legislating and implementing Brexit.

It would be easy to declare the negotiations over. But they are not. The TCA set up a plethora of committees to be serviced. Much of that will be done as part of business as usual in departments – substituting for the EU working groups that used to take up official time. But there are still negotiations underway – not least on the future of the Northern Ireland Protocol. So much less to do – but not nothing.

The big Brexit legislation is done. There was a huge amount of effort in Whitehall to transfer EU legislation into UK law. That job is done. But the Queen’s Speech showed that the legislative task is far from done. In a bumper speech, 38 new bills were announced with many focused on reaping Brexit opportunities. One of those is an enabling bill to allow ministers to amend retained EU law.  That suggests they plan another giant tranche of secondary legislation to change all that EU law that has been transferred onto our statute book. That needs civil servants to devise and draft.

The third big task is implementing Brexit. And that goes on and on.

The UK has taken on many tasks that once were done by the EU – and needs to substitute UK civil servants for Commission staff. The UK’s sanctions unit has tripled in size but was still slow in its initial response to Russia’s invasion of Ukraine. We have a whole new department that did not exist before Brexit – the Department for International Trade with the task of negotiating new trade deals – a major Brexit opportunity, but also one that needs new teams of trade negotiators and lawyers to take.  We also needed to set up a new quango – the Trade Remedies Authority – to run our trade defence – but their staff don’t count as civil servants as they are an Executive Non-Departmental Public Body.

Other civil servants are needed to take on more mundane tasks that used to be done at EU level.  The UK-EU border needs more people to manage, even though we are not implementing checks in full. The Health and Safety Executive has had to take on running the new GB chemicals register. The Medicines and Health Regulatory Authority can no longer look to the European Medicines Agency to authorise some medicines and devices for the UK (and at the same time it has lost income from doing work for the EMA). Authorisations for the new UKCA manufacturing mark (replacing the EU’s CE mark) are beset by delays due to a major UK capacity shortage.

And while Rees-Mogg stated publicly that he was not interested in what the EU is doing, if the UK wants to minimise trade disruption at both the GB-EU border and also at the GB-NI one, it needs to identify EU rule changes coming down the line (potential new restrictions on up to 12,000 chemicals spring to mind) and work out how to respond to them.

DExEU may be long gone but the task of EU monitoring and engagement lives on. Much more work also needs to be done to manage the ‘common frameworks’ designed to maintain the coherence of the UK internal market. In the Home Office, staff have had to go up to administer a new migration regime. Even if numbers coming in remain broadly similar, free movement used to mean cost-free and bureaucracy free movement whereas the new migration regime means everyone needs a visa and a civil servant to issue it.

There will have been set up costs and costs of managing the transition. But Brexit also means genuine increases in scope of what the UK government does.

They are how Brexit is done, and will go on being done, not unnecessary now the government might claim it is. And they mean that if Rees-Mogg wants to take the civil service back to its pre-Brexit size, he, and more importantly his colleagues, will have to accept that Brexit means doing fewer of the other things they might want to do.

By Jill Rutter and Joël Reland, UK in a Changing Europe.