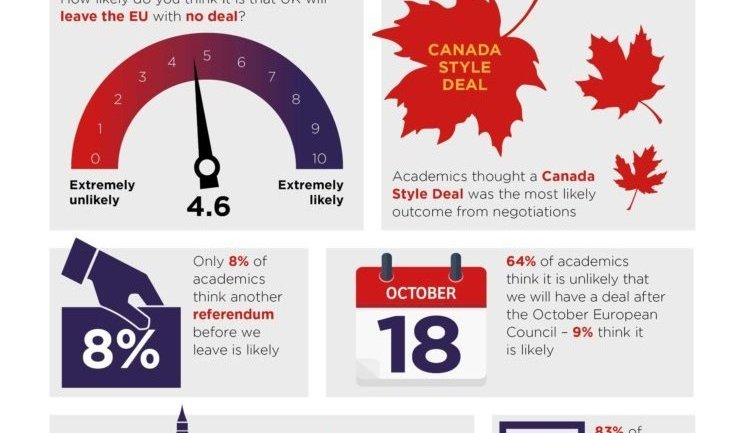 The UK in a Changing Europe has formed a new Brexit Policy Panel (BPP). The BPP is a cross-disciplinary group of over 100 leading social scientists created to provide ongoing analysis of where we have got to in the Brexit process, and to forecast where we are headed.

The broad consensus of the BPP is that the UK will leave the EU on 29 March 2019. Some 83% of the committee put the likelihood that we will leave on that date as a 7 out of 10 or higher. As one BPP member noted, ‘the amount of political capital invested in this date is substantial’.

This does not mean that a deal will necessarily be agreed. The average (mean) response concerning the likelihood of a deal on a scale of one to ten is 4.7.

A majority of our panellists (62%) gave a probability of 3 out of 10 or less that the October deadline for reaching a deal would be achieved.

This tallies with the panel’s uncertainty as to whether there will be a deal. However, given the high expectation the UK will leave next March, the necessity extension could clash with the political practicality of delaying the Brexit date.

However, there was a clear expectation that the transition period, currently scheduled to end in December 2020, will need to be extended: 71% of BPP experts gave this a 7 out of 10 probability or higher.

The panel was divided as to whether the government’s Brexit White Paper has helped in breaking the deadlock in the negotiations. Slightly more felt that it had enhanced (39%) rather than reduced (38%) the prospects of a deal.

Only around 1 in 5 members (21%) of the BPP felt that a Facilitated Customs Partnership will be the most likely final shape of a customs deal between the UK and the EU.

The expectation of our panel was that something akin to the ‘Canada Model’ is most likely for the UK: a future trade relationship based on a negotiated free-trade agreement (40%) rather than customs union membership (26%)

Equally, just 12% felt that the other key aspect of Theresa May’s Chequers Deal — a single market for goods but not services — was the most likely end point for the UK’s relationship with the single market. The most likely outcome was again felt to be something akin to Canada’s current arrangement (39%), with EEA membership unlikely (13%).

A plurality of our panel think that the border between the UK and the EU is likely to be on the island of Ireland. Despite a legal commitment from both parties that there will be no hard border on the island of Ireland, a border between the North and South is seen as the most likely outcome (35%), with 27% believing no regulatory border was likely, and 26% forecasting an ‘east/west’ border in the Irish Sea.

The July BPP expert survey consists of 107 responses from academics in a variety of disciplines across the social sciences, mainly from UK institutions. You can view the info graphics for this survey here. Please find the full list of BPP members here.