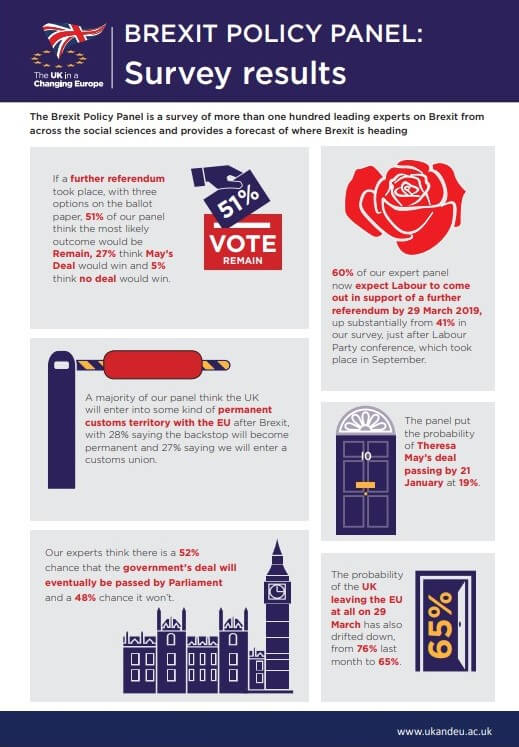 This month, our panel focused on the probability of the government’s deal being passed by Parliament. 52% expected an agreement on the lines the government has negotiated to be passed by Parliament at some point before 29 March 2019: roughly 20% expect the agreement to go through by 21 January (the ‘no deal’ deadline), a further 20% before the end of February and 12% think it will go down to the wire in March. As many as 48% think the deal will not pass.

A no deal Brexit

The probability of a no deal Brexit has fallen slightly, from 45% to 40%. However, the probability of the UK leaving the EU at all on 29 March has also drifted down, from 76% to 65%, somewhat supporting Mrs May’s assertion that rejecting her deal could lead to no Brexit at all. 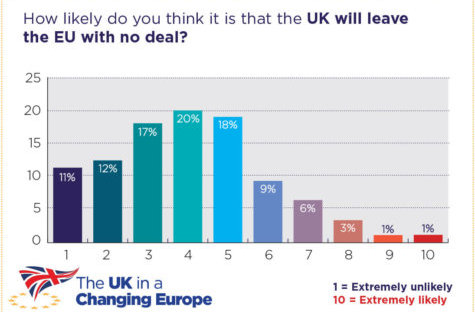 This is, in part, because the likelihood of a further referendum has increased. When we asked after the Labour Party Conference, 41% of our Brexit Policy Panel thought that Labour would ultimately back a further referendum before 29 March 2019. Now, 60% expect Labour to align with the ‘People’s Vote’ Campaign.

This has a knock-on effect of the probability of a referendum. Our panel put the chance of a referendum by the end of 2019 at 48%. Previously, we have asked whether a referendum would take place before March 2019 – an outcome which is no longer feasible.

We asked our panel if there were to be a three-way referendum before the end of 2019 what they would expect the result to be. The panel put the probability of Remain at 51%, leaving on the basis of May’s deal at 27% and no deal at 5% (17% were unsure). Excluding ‘Don’t Knows’, our panel weighed up the probability of Remain as 61%, May’s deal winning at 33% and No Deal winning at 6%.

A majority of our panel thought we’d enter into some kind of permanent customs territory with the EU after Brexit, with 28% saying the backstop would become permanent and 27% saying we’d enter a customs union. Just 16% thought we’d trade on the basis of a free trade agreement.

The chance of a regulatory border on the island of Ireland has fallen sharply according to our panel. Just 11% thought there would be a border on the island of Ireland after Brexit, down from 29% last month, while there was a strong increase in the proportion who thought it would be in the Irish Sea, rising to 57%, from 40% last month. Almost a third (31%) of the panel thought a regulatory border would be avoided altogether.

Our panel remain firmly of the view that it will not be possible to negotiate this relationship by the end of 2020, with 71% saying it won’t be possible. However, there was more optimism that December 2022 would give the government and the EU enough time: only 30% think that a trade deal could not be completed by then.

The future of Mrs May

Whether the Prime Minister will be able to hold on to the levers of office if her deal is rejected is an open question. On balance, the panel just about think Theresa May is likely to last till 29 March 2019: she is given a 55% chance of holding on until ’Brexit Day’; last month, the panel put the probability at 66%. 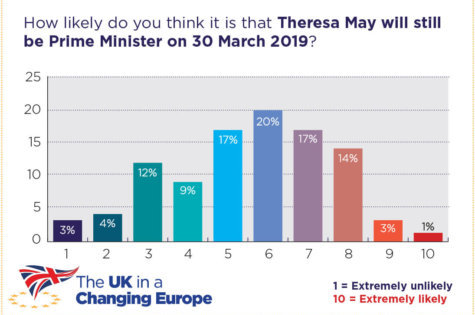