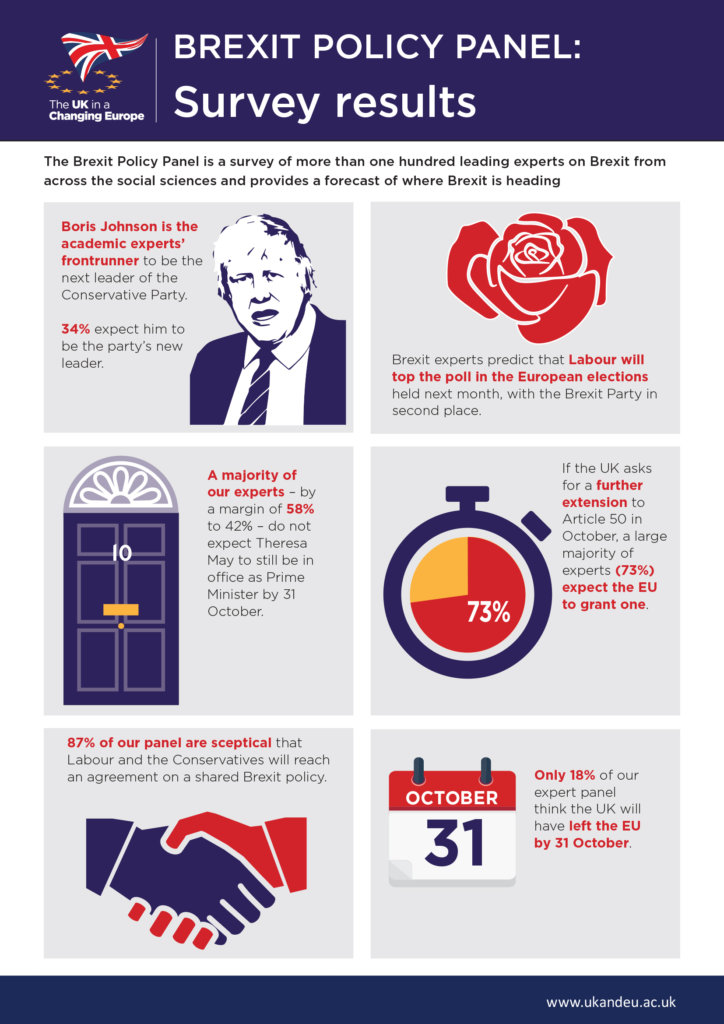 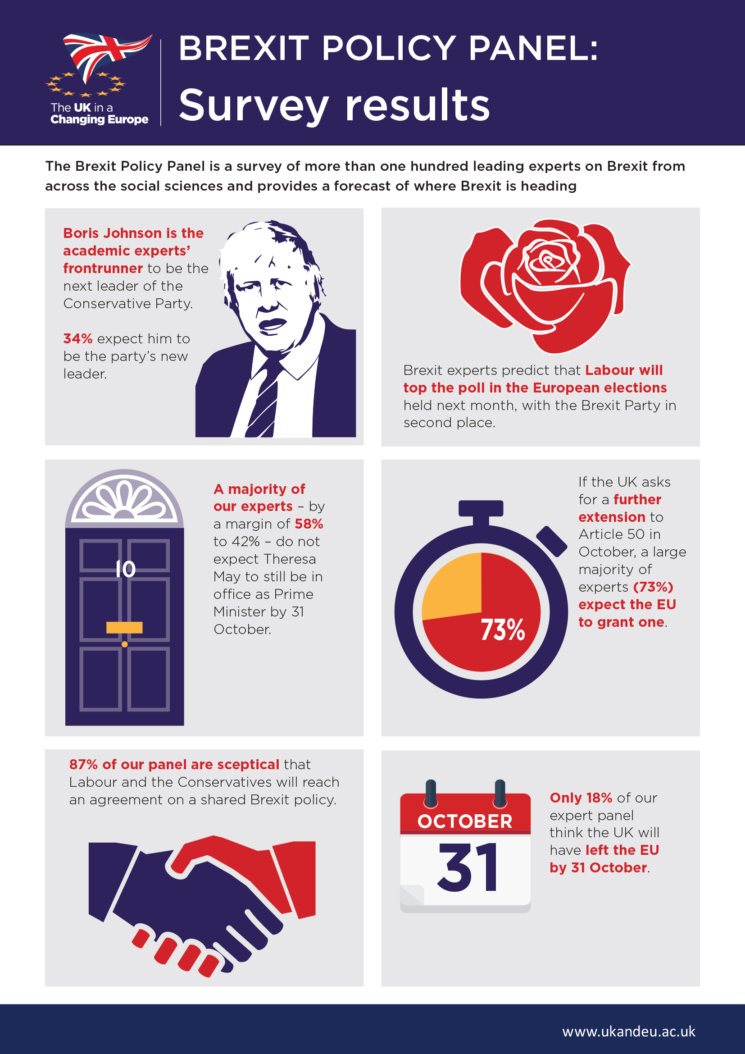 The UK in a Changing Europe’s Brexit Policy Panel (BPP) is a cross-disciplinary group of more than 100 academics from across the social sciences. It was created to provide ongoing analysis of where we have got to in the Brexit process, and to forecast where we are headed. A full list of members is here.

There is a significant level of uncertainty and unpredictability around the European elections. We asked our panel to rank parties by how well they would do, using percentage share of the vote as a measure. This survey was conducted prior to the parties launching their campaigns. There was a strong consensus on the panel that Labour were likely to top the poll. There was less consensus further down the list, though overall the panel expected the Brexit Party to come in second place, and for Change UK to be out-performed by the Liberal Democrats.

The next Tory leader

Another key ‘known unknown’ in British politics is who will be the probable replacement for Theresa May if and when she loses the keys to Downing Street. We asked our panel – approximating the methodology used by the Conservative website ConHome – to name the figure most likely to win a future contest. Our panel reaffirm Boris Johnson as the frontrunner, though have a more optimistic view of Jeremy Hunt’s chances than the ConHome survey suggests.

A key factor in the Brexit process is whether the European Council summit scheduled for October represents a ‘hard’ deadline for the UK, or whether EU leaders would accept a further extension of Article 50.  Our panel think it is overwhelmingly likely that the EU would grant an extension if the UK required one in the Autumn: 73% said a further extension would be agreed, 27% that it would not.

Only 32% of the panel expect a general election prior to this October deadline. However, a majority of our experts – by a margin of 58% to 42% – do not expect Theresa May to still be in office as Prime Minister by this date.

As the talks between the Labour party and the government rumble on, we asked our panel about the prospects for the negotiations. The panel were sceptical that they would lead to a cross-party agreement and the withdrawal agreement passing through the House of Commons.

Looking ahead, our panel put the chances of a further referendum taking place in 2019 at 49%, up from 42% a month ago. The chance of a no deal Brexit has also correspondingly fallen, from 38% to 33%.

We also asked our panel whether, on balance, they felt it was likely that the UK will leave the EU by the latest date of the current Article 50 extension period on 31 October 2019, having passed the withdrawal agreement. While 18% of the panel felt this was likely, 52% felt this was unlikely. 30% said they were unsure.

There has been an upsurge in the expectation that the UK’s trade relationship with the EU will be on the basis of membership of a customs unions – the proportion of our panel who expect this outcome has moved up from 24% to 39% in the last month. The probability that the UK and the EU will end up with a ‘Canada-style’ free-trade agreement is also falling: only 7% of our panel now expect this outcome.

Some 88% of the panel think the December 2020 date pencilled in for future trade talks to end is too optimistic. Only 21% think an agreement on trade could be reached by December 2022, the maximum date negotiations can be extended to in the withdrawal agreement.

The broad expectation that there will be no border on the island of Ireland has also been reaffirmed by the panel: just 9% of our panel now expect any border between the UK and the EU to be ‘North-South’. 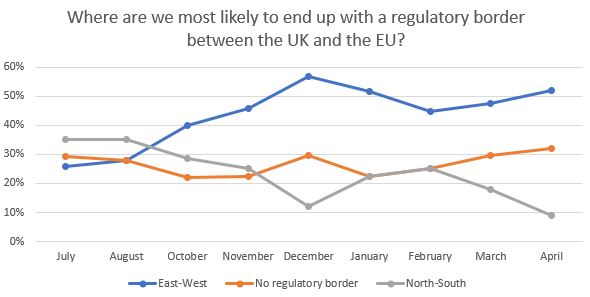