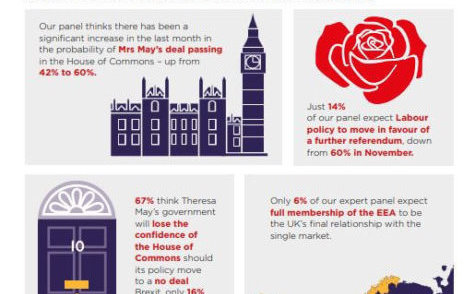 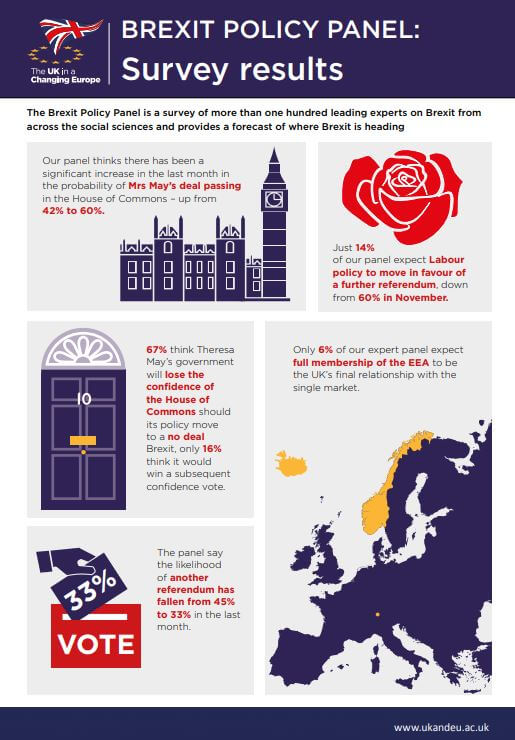 The panel say the likelihood of another referendum has fallen from 45% to 33% in the last month.

In part, this is driven by increased scepticism that Labour will come out in support of a referendum – just 14% of our panel expect Labour policy to move in favour of a further referendum, down from 60% in November

Only 6% of our expert panel expect full membership of the EEA to be the UK’s final relationship with the single market following any post-Brexit negotiation.

67% think Theresa May’s government will lose the confidence of the House of Commons should its policy move to a no deal Brexit, only 16% think it would win a subsequent confidence vote.

This month has seen a significant increase in the probability of Theresa May’s deal passing through parliament. Last month 42% of our panel thought the deal would ultimately pass, and this has risen to 60%. However, only 40% of our panel think it will be passed by 29 March 2019, with the other 20% thinking the deal will be approved after the current pencilled-in Brexit Day of 29 March 2019.

The Labour Party and a referendum

Only 14% of our panel think the Labour party is likely to come out in support of a referendum on the UK’s negotiated deal with the EU before 29 March 2019. This continues a significant fall from 60% in November, and 32% last month. 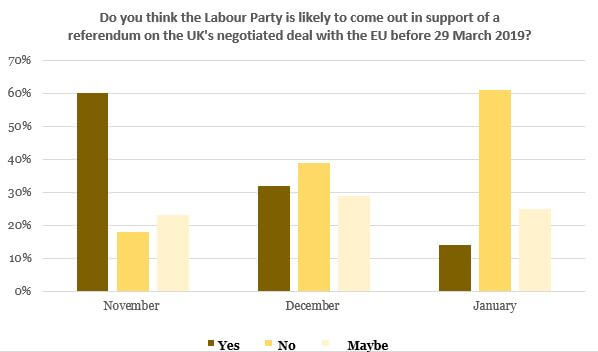 Our no deal barometer asks each of our expert panellists to give the likelihood of a no deal. The average answer gives the chance of a no deal Brexit at 48%. We also ask whether or not experts think we will leave the EU on 29 March: a slim majority (52%) of experts do still believe that the UK will leave one way or another by the end of March – with or without a deal.

There is a remarkable level of uncertainty about what the future relationship after any transition period in likely to look like. The four most plausible outcomes: a customs union, a free trade agreement, the backstop and a bespoke customs arrangement are each given between a 20-25% of being the final outcomes of the future trade negotiations.

In terms of the UK’s relationship with the EU single market, the majority of our panel expected the UK to end up in a unique position in relation to the EU’s existing third-country relationships.

Just over a third (37%) of panellists expected the UK to end up with bespoke single market access, 33% thought the UK would maintain access for goods but not for services. Only 6% of experts expect the UK to be members of the EEA at the end of any transition period.

The current end-date of the transition period is overwhelmingly seen as an insufficient time to negotiate the future relationship between the UK and the EU. 80% of our panel felt a deal would not be completed by December 2020, which would prompt to need for an extension of the transition. Only 30% felt an extension to the maximum date of December 2022 was long enough, with 37% of our panel saying it is too early to tell.

Giving the continued salience over discussions about the Irish backstop, we asked our panellists once again about where they thought the regulatory border between the UK and the EU would be. 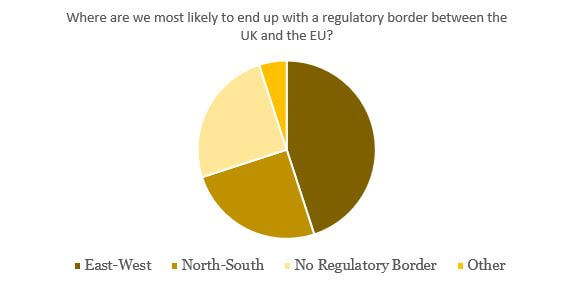