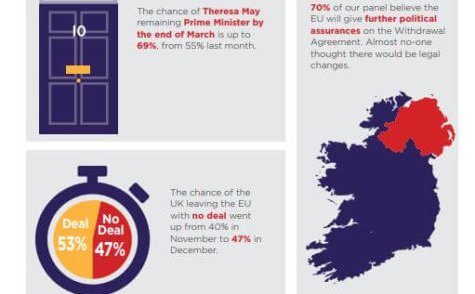 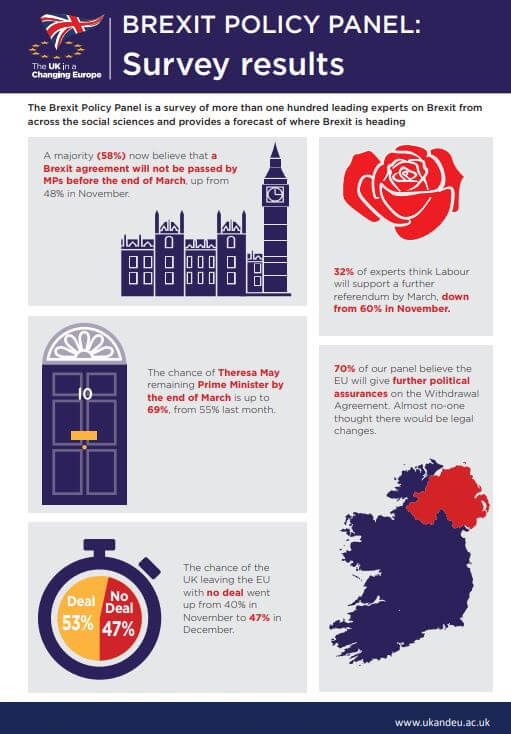 A majority (58%) now believe that a Brexit agreement will not be passed by MPs before the end of March, up from 48% in November.

If the deal is rejected by MPs this week, 70% of our panel think only political assurances will be forthcoming from the EU on the backstop.

Our panel now do not think Labour will come out in support of a referendum before the end of March, with just a 32% chance, down from 60% in November.

Theresa May’s position has become more secure following the Conservative confidence vote, with her chance of remaining Prime Minister by the end of March up to 69%, from 55% last month.

The chance of the UK leaving the EU with no deal went up from 40% in November to 47% in December.

Although only 1 in 10 thought it would be negotiated by the end of 2020, over 30% thought the future relationship would be completed by the end of 2022. This suggests a considerable chance that the backstop provisions on Northern Ireland would come into effect at that date.

The chance of a referendum on the Brexit deal before the end of 2019 remained more or less the same this month, at 46%, from 48% in November.

This month our panel became more pessimistic about the probability of the government’s deal being passed by Parliament. None of our experts expects the deal to be approved tomorrow.

Furthermore, 58% do not expect any agreement to be passed by MPs before the end of the Article 50 period as it currently stands. Roughly a third of the panel think a deal will be passed in either February (14%) or, more likely, March (21%).

While in November almost two-thirds of our experts thought Labour would come out in support of a referendum on the Brexit deal before the end of March, in December this figure fell sharply, with just 32% of our panel now expecting Labour to support a further vote. This may be a reflection of Jeremy Corbyn’s unwillingness to submit a formal no confidence motion in the government and his leadership’s resistance to such a development in the party’s policy.

By contrast, Theresa May’s position has been strengthened following her party’s confidence vote in her leadership. Some 69% of our panel now expect her to see out what remains of the Article 50 period, as currently defined, as prime minister.

This is a strong increase from 55% in November, reflecting the fact that she is now immune to a formal internal party confidence vote for another year and perhaps also that Labour has dithered in calling a formal parliamentary confidence vote in her government.

With Theresa May’s deal facing inevitable defeat in the Commons tomorrow and Labour’s reluctance to seek a decisive alternative course, the possibility of the UK leaving the EU without a deal has crept up, from 40% in November to 47% in December. There remains a lot of uncertainty among the panel about the chances of no deal, but the seeming lack of feasible alternatives that could garner a majority among MPs may be driving up our experts’ expectation that we will end up with no deal by default.

This month we asked our panel about the various timeframes that might apply should a Brexit deal be passed and the UK enter into a transition period with the EU. Our panel’s view supports the inclusion of an extension clause in the Withdrawal Agreement, as just 7% think the future relationship treaty can be negotiated by the end of 2020.

However, the additional deadline of the end of 2022 seems more feasible, according to our experts, with just under a third (31%) believing this will be sufficient. Just over a third (34%) believe that even a fully extended transition will not give the UK and the EU enough time to complete negotiations.

As with the prospects for no deal, there remains a large degree of uncertainty among our panel about the possibility of a referendum on the Brexit deal. The chances have remained broadly the same since November, when 48% thought another public vote was likely, at 46% in December. Even if a vote did transpire, a number of our experts commented that it was unlikely to provide clarity even if it did take place.

Leaving, one way or another

This is a slight decrease on November, when 65% of our panel thought we would leave by the end of the current Article 50 period. Failing that, a number of our experts commented that an extension of Article 50 was beginning to look increasingly likely.

We continued to ask our panel this month about the shape of the future relationship between the UK and the EU, and views vary significantly. In terms of our future customs arrangements, almost a third (31%) believe the temporary customs arrangement in the backstop will come into force, while almost a quarter (24%) thought we would end up in a permanent customs union with the EU.

In terms of the UK’s relationship with the EU single market, the majority of our panel expected the UK to end up in relatively unique position in relation to the EU’s existing third-country relationships.

Giving the continued salience over discussions about the Irish backstop, we asked our panellists once again about where they thought the regulatory border between the UK and the EU would be in future. A majority of just over half (52%) of the panel think the border will end up being in the Irish Sea, or East-West, while just under a quarter each expected there either to be no regulatory border at all or that it would end up on the island of Ireland itself (or North-South).