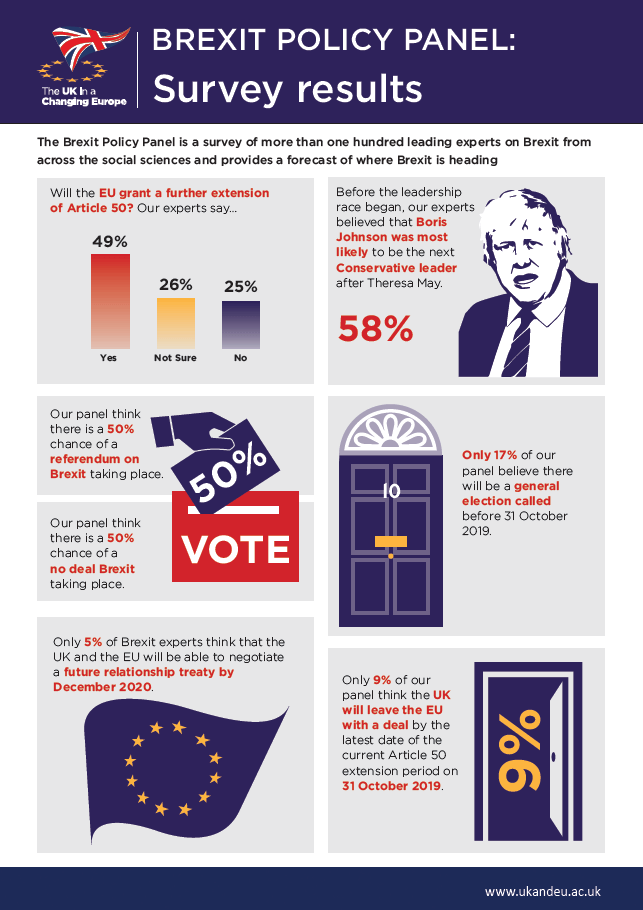 The UK in a Changing Europe’s Brexit Policy Panel (BPP) is a cross-disciplinary group of more than 100 academics from across the social sciences. It was created to provide ongoing analysis of where we have got to in the Brexit process, and to forecast where we are headed. A full list of members is here.
Members of the BPP complete a monthly survey addressing three key areas of uncertainty around Brexit: if – and when – the UK will leave the EU; how Brexit will affect British politics; and what our relationship with the EU is likely to look like in the future.

The key takeaways from this month’s survey of our panel are:

The key Brexit question remains whether the UK and the EU can agree and ratify a withdrawal deal and, if not, whether the UK will leave the EU on 31 October.
Our panel remains extremely sceptical that any deal will be agreed between now and the new Brexit deadline: just 9% of our experts think this is likely.

Do you think the UK will leave the EU by the latest date of the current Article 50 extension period on 31 October 2019, having passed the withdrawal agreement?

We asked our panel to place the likelihood of no deal on a scale from 0 to 10. The average score was 5.1, suggesting our panel put the chances of no deal at 50:50.

The panel were also asked whether or not a referendum would be held on EU membership in the next 12 months – the average score of 4.9 suggests again a roughly 50% chance that a new referendum will take place.

If there is still no deal by 31 October, our panel think that the UK will be likely to request a further extension of Article 50. This is despite Boris Johnson’s repeated commitment that the UK, come what may, will leave the EU on 31 October. Some 69% of the Brexit Policy Panel expect to UK to ask for an extension; only 22% do not.

If a resolution has not been reached by the latest date of the extended Article 50 period on 31 October 2019, do you think the UK will ask for a further extension of Article 50?

If a resolution has not been reached by the latest date of the extended Article 50 period on 31 October 2019, do you think the European Council would support a further extension?

Our expert, polled just ahead of the formal stage of the Tory leadership contest, is overwhelmingly of the view that Mr Johnson will be the next leader of the Conservative Party, with Michael Gove seen as the candidate that will be closest to challenging him.

Who do you think is most likely to be the next Conservative leader after Theresa May?

Do you think there will be a general election called before the latest date of the current Article 50 extension period on 31 October 2019?

Another key issue is which party grouping, if any, the Brexit Party will sit with in the European Parliament – with other populist parties including Matteo Salvini’s Lega Nord, in their current small group or as an unaligned party. Our panel think the most likely outcome is that the Brexit Party remains in the EFDD.

Which grouping in the European Parliament is the Brexit Party likely to join?