Having conducted 11 rounds of surveys during the first phase of the Brexit process, we have once again surveyed our experts to get a sense of how they see the second phase of negotiations, on the future relationship, playing out.

The future relationship will cut across different sectors. The two big elements are goods—notably manufacturing and agriculture—and services. Our experts thought an agreement on trade in goods was more likely than not in the current transition period, due to end on 31 December 2020, with two-thirds (67%) rating it as likely or highly likely. 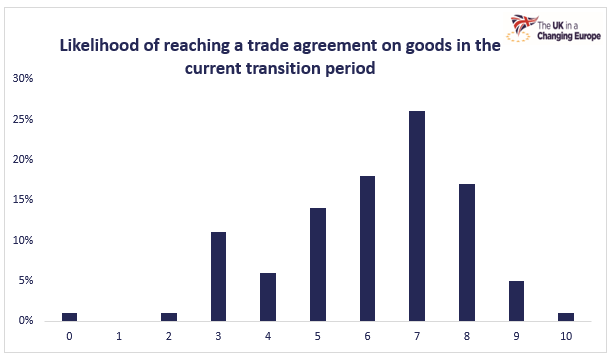 However, when it comes to services our experts are much less optimistic. A majority (74%) rated the chances of reaching an agreement in the transition period as unlikely or highly unlikely.

One of the central aspects of negotiations on a future trade agreement will be so-called ‘level playing field’ measures. We asked our experts how likely they thought it was that the UK would maintain ‘some equivalent regulatory standards’ with the EU.

We also asked our panel how likely they thought it was that the UK would reach a trade agreement with the United States within the next five years. Our experts thought this was more likely than not, with a majority (52%) thinking it was likely or highly likely. 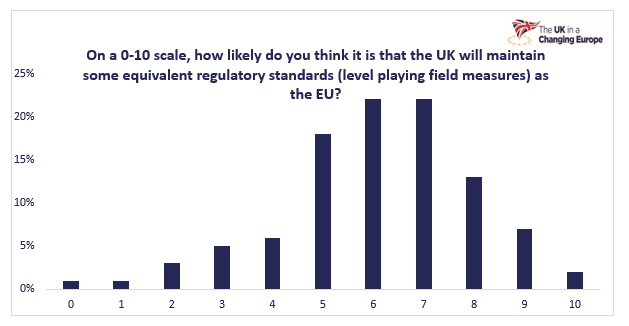 The EU is also set to reach a conclusion during the transition period on the adequacy or otherwise of the UK’s data protection regime, which is a necessary precursor to much future co-operation on internal security in particular. Our experts were split almost down the middle (51%) on whether or not they thought the EU would approve the UK’s data regime.

Other contentious issues that will come up in the transition period will be financial services and fisheries.

On fisheries, our panel had a similar view, with 47% saying an agreement would be reached in the transition period.

With lots to negotiate in the relatively short transition period, our panel gave their view on the likelihood that this period would be extended. 44% of our experts think an extension of the transition period is unlikely or highly unlikely.

We asked our experts what they thought the overall economic impact would be on the UK in the light of their expectations for a future agreement.

We also asked our experts to give an assessment of the impact that failing to reach a trade agreement with the EU would have, compared the impact they had previously expected from leaving the EU without a Withdrawal Agreement. The majority of our panel (67%) agreed that the impact would be similar but almost a quarter (24%) thought it would be less damaging. Only 8% thought it would be more damaging than leaving without a Withdrawal Agreement. 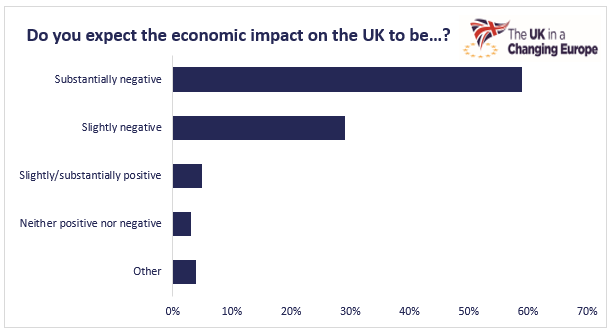 Finally, we asked our experts to give an assessment of what they ultimately expected the UK’s economic relationship with the EU to look like, based on previous precedents of EU agreements with third countries.

A majority of our experts (53%) thought the future economic relationship would be similar to the EU’s free trade agreement with Canada. A quarter of our panel thought it would end up more like the EU-Swiss arrangement, with sector-by-sector bilateral agreements. Some 4% thought the UK would end up inside the single market as a member of the EEA, while 5% thought that the UK and EU would continue trading long-term with no agreement, relying on basic World Trade Organisation terms. 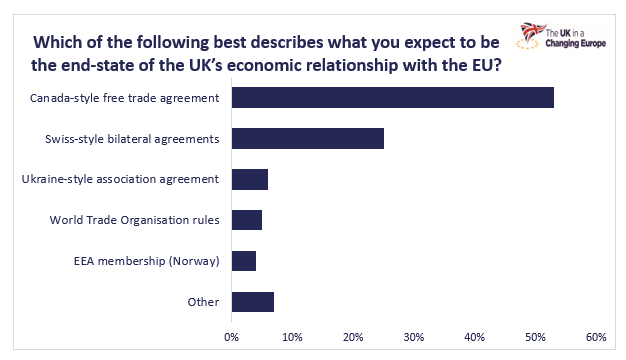