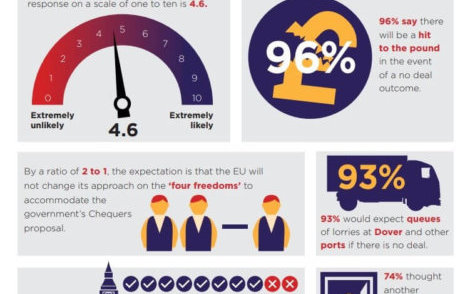 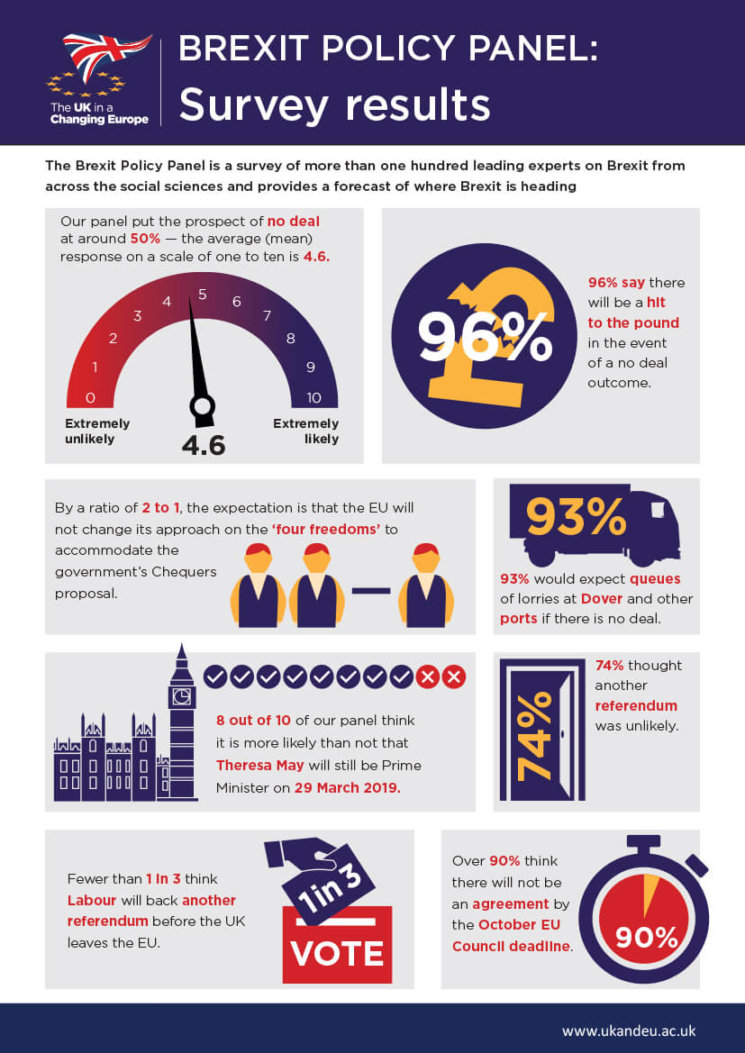 The UK in a Changing Europe’s Brexit Policy Panel (BPP) is a cross-disciplinary group of over 100 pre-eminent academics from across social science. It was created to provide ongoing analysis of where we have got to in the Brexit process, and to forecast where we are headed.

Our second monthly survey continues to show significant uncertainty about Brexit. However, some key themes have emerged: 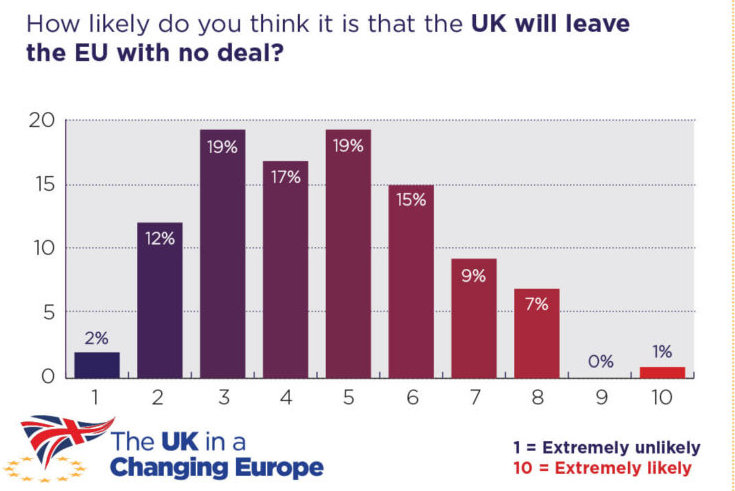 Despite the heat and the noise around Brexit – and the increased speculation and public preparation around a ‘no deal’ scenario – our panel do not think the chance of no deal has substantially increased. On average, academics gave a (mean) response of 4.6 out of 10. In effect, the odds of a no deal remain something close to 50:50.

If it were to happen, what would a no deal mean for people’s day-to-day lives?

There was broad agreement that a no deal scenario would be damaging. A majority – 58% – felt there would be substantial, lasting disruption, while 38% felt the disruption would cause major and widespread economic and social damage.

There was strong consensus on some impacts. It was viewed as nearly certain that sterling would be hit: 96% of academics forecast a significant fall in the pound as a likely effect of a no deal scenario. Our panel are also near-united on the likely disruptions to trade: 93% think that there will be long queues of lorries at Dover and other ports if there is no deal. Some 67% think there will be shortages of some kinds of fresh food, as a result of this disruption.

There was also scepticism about some of the potential effects of no deal happening: less than a quarter (23%) thought it likely there would need to be any army presence to manage short-term disruption, while less than one in five (19%) thought power shortages, due to the shutdown of nuclear power plants, were likely if there was no deal.

However, on other aspects, there was less consensus and a great deal more uncertainty among our experts. The panel were split on the impact on transport: 51% think a large number of flights between the UK and the EU would be cancelled. Equally, whether medical supplies are likely to be disrupted produced a mixed view: 48% of the panel felt this was a likely impact resulting from a no-deal scenario.

The future of Theresa May 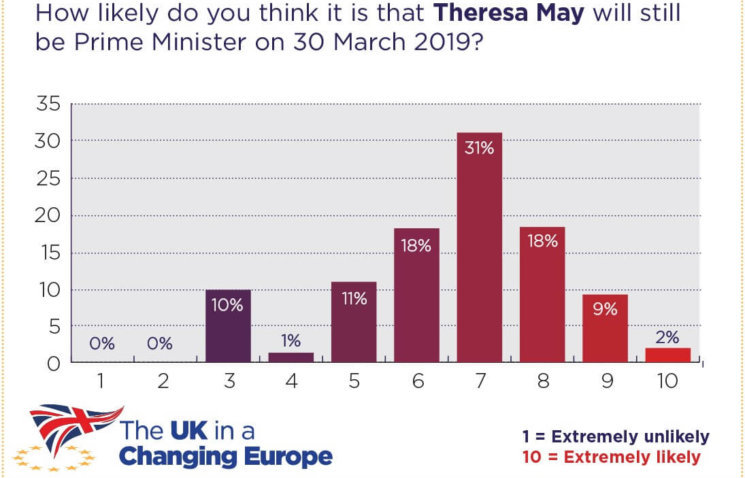 The panel had some optimistic news for Theresa May. The broad consensus was that it is likely she will still be Prime Minister on ‘Brexit Day’ – 88% of our panel thought May would still be in place at the moment the UK is scheduled to leave the EU. 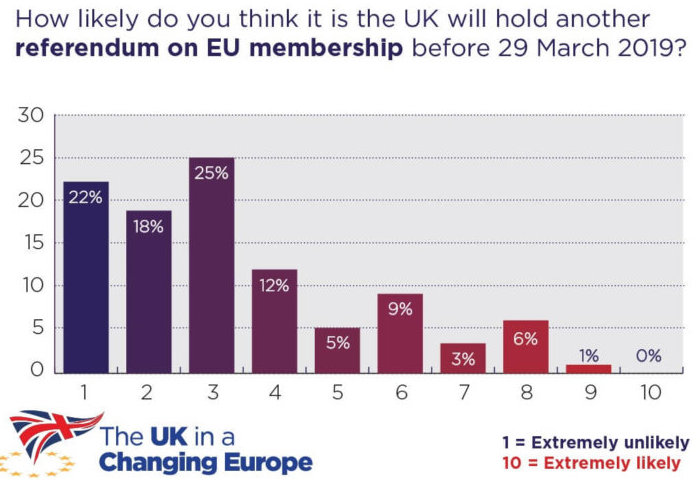 The campaign for a referendum on the UK’s deal still faces fundamental barriers to a vote, which make it difficult to foresee how a referendum could come about prior to 29 March 2019. Some 65% of our panel think a referendum is ‘extremely unlikely’, making the likelihood of a vote 2 or less out of 10.

Partly this is because Labour does not currently support a second referendum, and our panel think this is likely to remain the case, with only 32% expecting a Labour shift towards second vote.

A key issue is whether or not the EU’s negotiating red lines will shift to accommodate Theresa May’s domestic problems. Just under two-thirds of our panel feel that the EU’s core position – that the four freedoms of the single market of goods, capital, services and labour are indivisible – is unlikely to shift. 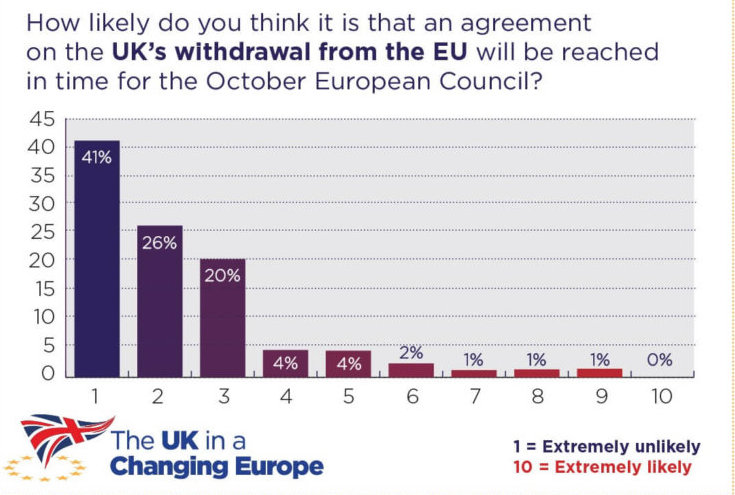 All this leads to a broad expectation of negotiating deadlock. There was a consensus that the government’s long-stated October deadline for a deal with the EU is dead in the water. Only 2% thought it was ‘extremely likely’ this deadline would be met, while 95% thought it was unlikely that the UK and the EU will reach a deal at this time.

This begs the question: what happens if the UK and the EU separate in March but need more time to sort of out the future relationship? 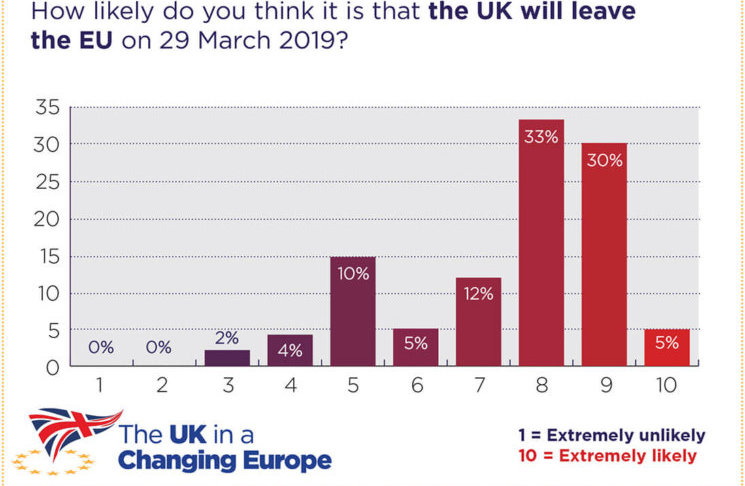 The panel broadly thought Brexit Day was set in stone: 68% thought it was extremely likely that the UK would leave on this date, while 85% think it is at least the most likely outcome.

However, there was a clear expectation that the transition period, currently scheduled to end in December 2020, will need to be extended to avoid a ‘cliff edge’ with negotiations incomplete: 65% of BPP experts suggested this was likely.

The August BPP expert survey consists of 102 responses from academics in a variety of disciplines across the social sciences, mainly from UK institutions. Please find a list of BPP members below: