Brexit, sexual orientation and gender identity: what about the people? 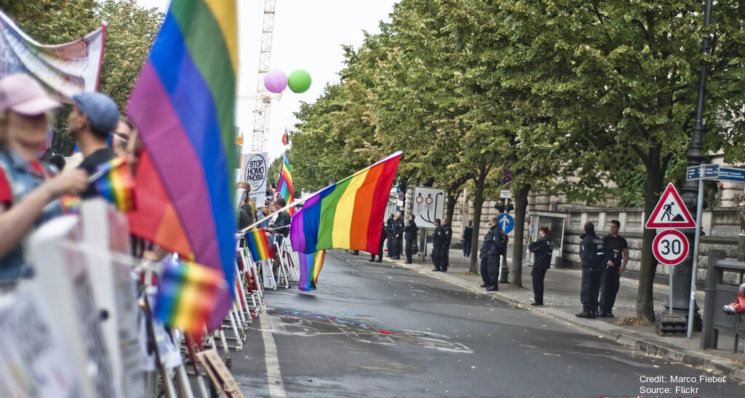 Slowly, but surely, awareness is increasing about the possible impact of Brexit on individuals who identify, or are identified as, members of minorities based on their sexual orientation or gender identity (SOGI).

After explorations of this theme by Wintemute and by us, Cooper, Cooper et al., and the Trade Union Congress all alerted people to the potentially detrimental effect that Brexit may have on SOGI minorities.

It is critical to note that these SOGI minorities are far from monolithic, and any potential impact of Brexit for them will be different at a sub-group and even at an individual level.

Broad-brush, abstract policy analyses on this theme – as on any other theme – fail to capture the essentially individual nature of the relationship between SOGI minorities and Brexit, as one of the most divisive and hotly contested topics in British society for many decades.

In this short piece, we wish to delve into that individuality, bringing to the fore just some of the voices within the ‘SOGI minorities’ umbrella and listening to their concerns, fears and hopes in relation to Brexit – both specifically related to their identity and more generally about life after Brexit.

In an attempt to record and analyse how individuals experience and understand the Brexit process, a group of researchers from the University of Sussex have commissioned a Mass Observation Project entitled ‘The EU referendum – one year on’.

The thoughts shared by these three respondents on Brexit are worth exploring for the insights they offer into some of the factors that SOGI minority individuals might find important in the Brexit debate.

All these respondents voted Remain, and were considerably critical of the referendum itself (although it is known that not all members of SOGI minorities are against Brexit).

Whilst Michael did not see the need for the referendum to start with, and Peter asserted that the campaign ‘was full of lies’, Andy considered that ‘the EU referendum was one of the most idiotic and wasteful undertakings the UK government had undertaken in many a long year. I saw it as nothing more than a charter for racism, xenophobia and English right nationalism.’

Peter shared this position by stating that although it may be true that ‘Britain is a complex and capable nation which can, and perhaps should, be able to stand alone’, this ‘pride is more a veiled form of xenophobia in many people.’

Similarly, for these respondents the relevance of immigration in the Brexit debate was patent. Peter, for example, argued that ‘the presence of EU nationals in the UK is a good thing as we need young tax payers to fund our public services. People’s objections to migration are parochial and ill-informed.’

For Michael, in particular, this debate touched him personally, as he had had a same-sex Spanish partner who lived in the UK for many decades and eventually died in the UK.

In his words, ‘[h]ad [his partner] still been alive, he would have undoubtedly have been one of the many thousands of foreign nationals worried about their future life in this country.’

The consequences of Brexit for individual rights was also reflected in the concerns expressed by Andy: ‘Those who wanted [Brexit] to happen will be greatly peeved when they realise that the streets have not returned to a picture of the 1950s.’

‘When they realise they will have to pay more for goods and receive less wages, and as their rights are stripped away and trodden on by a so called respectable face of fascism, the[y] will whinge and moan and throw bricks. Because that’s how they believe you fix a society [,] by tearing it apart.’

This apprehension is expressed by Peter, who says that ‘we will also be affected in the UK by an upsurge in hatred and prejudice’ and ‘the British working class, and even more sadly many middle class too, has allowed itself to be duped and trapped into a cycle of blame and hatred which really only serves to benefit politicians.’

This inevitably affects SOGI minorities in the mind of Peter, as he points out that ‘the EU referendum vote has encouraged a sleeping conservative and nationalist sentiment to be awoken and given a voice’.

This worries Peter ‘as a gay man who has benefited from the liberalisation of attitudes in society and the greater care with which people often now express themselves. I do believe words have a real power and if we allow people to say what they think without restraint we will see an increase in prejudice and ignorance which will be disadvantageous to people in minority groups.’

What about all other voices?

These respondents’ voices are just an illustration of how some members of SOGI minorities see Brexit. Certainly no firm conclusions can be taken from such a limited sample, which only includes gay men and leaves out so many other SOGI minorities, such as trans individuals who are remembered and celebrated today.

And yet, all SOGI minorities stand to lose in the Brexit game.

Peter recalls a colleague-cum-friend ‘railing about the “myth” of transgender and insisting there are only two genders (…) she made the points vocally. I think this confidence to express such non-PC views has been created to an extent by the sense that Britain is going back to some former state of being.’

SOGI minorities must rally quickly and effectively if such regression is not to materialise.

By Dr Carmelo Danisi, Dr Moira Dustin and Professor Nuno Ferreira, all at the University of Sussex and members of SOGICA.