Brexit, the EU and Japan 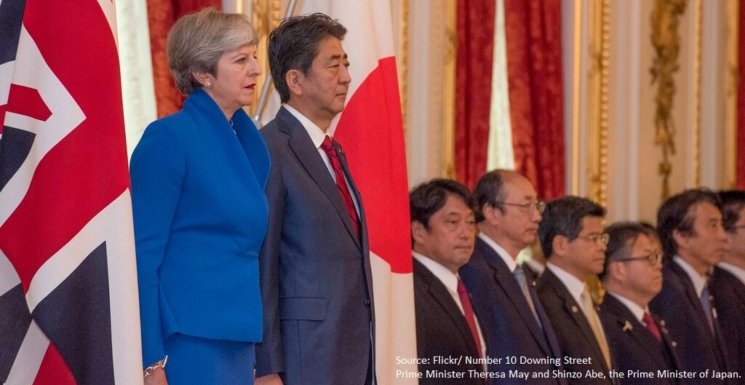 Some sections of the press recently celebrated Theresa May’s success in getting a post-Brexit ‘deal’ with the Japanese government. Proof, as it were, that Brexit will be a success because major economies around the world are queuing up to welcome a United Kingdom free from the clutches of the EU.

Needless to say, the reality is somewhat different. The Japanese government did commit to prioritising a deal with the UK but – as the PM herself recognised in her remarks in Japan – this is dependent on the successful conclusion of the Japan-EU deal and the UK’s exit agreement with the EU. Neither of these can be guaranteed to be trouble free: the former is largely outside the UK government’s control and the latter is, as we are seeing, fraught with difficulty too.

The case of the long-term engagement between the EU and Japan is an interesting and instructive one, with many potential lessons for the post-Brexit UK. To grasp the detail of these lessons, we must look at the history of EU-Japan relations.

The EU’s engagement with Japan is long-standing and deep. Institutional contacts began as early as the 1970s, but the period until the late 1980s was marked by trade friction. In the aftermath of the changes to the global order following the fall of the Berlin Wall, the EU and Japan were poised to play an increasing role in international affairs. Both had become economic powerhouses but with relatively little political clout. In the absence of other major politico-economic powerhouses, notably China, the EU-Japan relationship was characterised as the ‘weak link’ in a US-EU-Japan triangle.

The establishment of an EU-Japan Partnership via a Joint Declaration in 1991 put the relationship on a stronger footing. But cooperation emerged slowly and, despite their respective economic strength, the milestones occurred in other fields, particularly climate change. Both parties played key (and public) roles in the run-up to the Kyoto Protocol (1997).

The EU-Japan Action Plan (2001) was more specific about engaging on economic cooperation. But this did not explicitly refer to a future free trade agreement between the two, especially since this type of agreement was unchartered territory for Japan. Japan only began signing such agreements – first with Singapore and then with Mexico – in the 2000s.

Rather, the key outcome of this action plan was the start of a deregulation dialogue between the EU and Japan, which mirrored another dialogue with the US. Each side submitted issues of regulatory and related difficulties experienced by its firms and citizens, and this gave the European Commission an opportunity to call for sweeping reforms in Japan to make its economy more open to European firms.

EU member states, fully aware that this privileged access to the highest levels of Japanese government was not open to anyone else but the US, happily fed into the process. Meanwhile, Japan’s points of concern were often related to issues of unevenness in the single market, but sometimes covered matters under national, rather than EU competence, which the Commission transmitted to the member states to deal with.

The long-running deregulation dialogue was thus a necessary precursor to building up respective knowledge, awareness and trust. Further, by placing the EU on an equal footing with the US, it signalled how significant the EU had become for Japan. The launch of the Euro and, to a lesser extent, enlargement to Eastern Europe, was certainly interpreted in Japan as representing the EU’s confidence in moving to the next stage of integration.

The fact that the deregulation dialogue operated on a largely informal basis too is significant. The overall aim was to tackle some of the major regulatory, institutional and even cultural barriers to trade, and in this respect, this mutual learning process proved essential in allowing both sides to reach a proposed FTA.

Why does this matter for Brexit?

First, the UK has a very strong bilateral relationship with Japan. When Japan opened to the world in the 19th century, Britain was one of the states Japan attempted to emulate by adopting aspects of its political, legal and military systems. The strength of this relationship and the global importance of London as a financial centre means that Japan sees the UK as its gateway to Europe – with its corporate bodies acting accordingly.

Therefore, the Brexit vote sent shockwaves through Japan. The collaborative response from the government and business community was swift and published in an open letter from Japan to the UK and EU in September 2016. The message set out a clear desire for a Brexit settlement that left the UK and EU in a relationship which, to outsiders, might not seem very much different from actual membership.

The emphasis on full transparency in UK-EU negotiations, rights of workers within the EU (essential for Japanese companies established in the UK) and guarantees on future tariff and non-tariff barriers was notable not only for the substance but also the tone. It is very difficult to imagine such a strident message only a few years before.

Second, the EU is understood in Japan as a primarily economic organisation.  Since there is no equivalent regional organisation in Asia – the Association of South-east Asian Nations (ASEAN) is largely limited to cooperation and not integration – the reasons the UK population had for voting to leave are not fully appreciated. To Japan, and the rest of the world, it is somewhat baffling that the UK has willingly cut itself off from the largest and most successful free trade entity in the world, while at the same time assuring the world that it will be an even bigger proponent of free trade.

Third, the development of separate agreement between the UK and Japan is not seen as an easy task. Even though the UK has been closely involved in the EU’s negotiations with Japan, the EU institutions have taken the lead – so the UK will not necessarily inherit the knowledge or experience the EU institutions enjoy.

Further, the Japan-EU FTA is focused on goods, but the UK will need a very different agreement which can specifically suit its service-based economy. This  is likely to need an even longer process of confidence-building and discussion before formal negotiations can start, even if an interim agreement is secured.

Fourth, the sequencing of Japan-EU, UK-EU and, only then, UK-Japan agreements is a warning about some of the assumptions made about agreements between major economies. And of course, ‘trade deals’ are much more complex than a handshake and polite words between government leaders. Even if the terms of the Japan-EU agreement could be copied into a future Japan-UK one, there is always the possibility that the length of time taken to negotiate it would throw into the mix a whole host of political, economic or other issues which are not easily foreseeable.

In short, the messages from Japan to the UK following the Prime Minister’s visit are certainly encouraging for the future – but we should be very sceptical in assuming that the UK’s influence and ability will remain as strong when we are no longer an EU member state.

By Paul James Cardwell, Professor in Law at Strathclyde University.