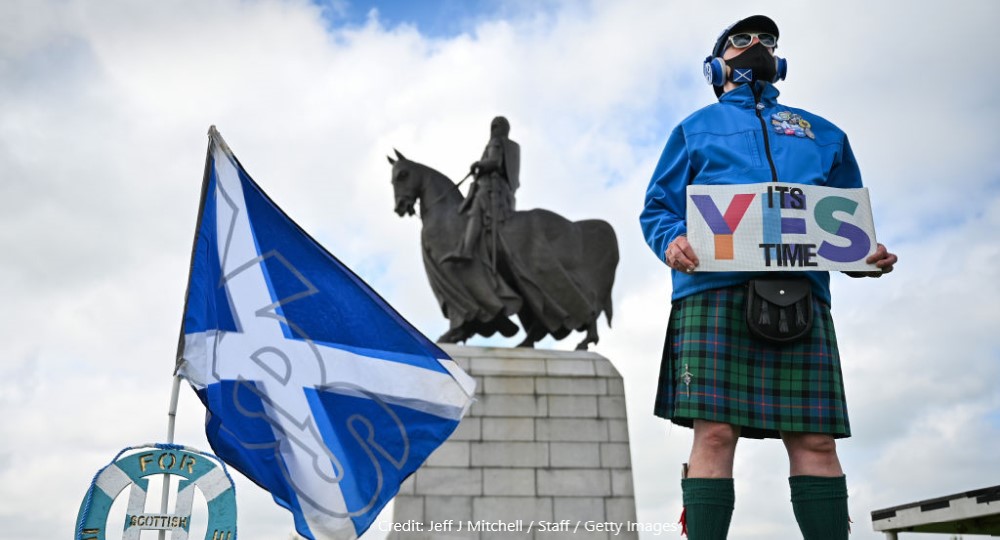 In 2014, Scotland voted against independence from the UK in what was to be a ‘once in a generation’ referendum. But the question is back on the table.

A majority of Scots now support independence, after Brexit and the handling of the coronavirus pandemic have diminished the lustre of government from London. And the Scottish National Party is pledging to hold a new vote if they win a mandate in the 2021 Scottish Parliament elections.

In recent work at the Centre for Economic Performance, we analysed the economics of Scottish independence by looking at its impact on trade. Independence would put a new border between Scotland and the rest of the UK, introducing new trade costs. An independent Scotland would also have the option of re-joining the EU.

In our work, we asked (and answered) three questions.

How important is the rest of the UK as a trading partner for Scotland?

The rest of the UK is Scotland’s largest trading partner, by far.

Even if Scotland weren’t part of the UK, we would expect a lot of trade between the two countries – they’re very close together, share a common language and are physically contiguous, all of which are factors known to increase trade.

But the Scotland-rest of UK relationship goes well beyond this. In a gravity model of trade, we found that Scotland-rest of UK trade is six times the level we would expect, after controlling for these factors. This shows how supportive being in an economic and political union can be.

What would be the economic impact of independence, relative to Brexit?

The combination of independence and Brexit would reduce income per capita by at least 6%, and the impact of independence would be two to three times greater than that of Brexit.

Independence would impose a new border between Scotland and the rest of the UK. Various academic studies have estimated the effects of borders on trade. Although there is no consensus on the exact number, borders are usually estimated to have large negative effects (see here, here, here, and here, for example).

Based on this literature we analysed an optimistic low cost scenario where independence increases trade costs with the rest of the UK by 15%, and a pessimistic high cost scenario, with a 30% increase.

To estimate the effect of these increased costs, we used an updated version of the Centre for Economic Performance model of trade.

This takes into account the links between four regions (Scotland, the rest of the UK, the EU, and remaining countries) and the structure of each of their economies (27 industries and their links to each other).

Our results are summarised in the chart below. In a nutshell, the rest of the UK is currently a much more important trade partner than all other countries combined. As a result, the data show that the trade costs imposed by independence would cause a substantial reduction in Scottish trade and income. 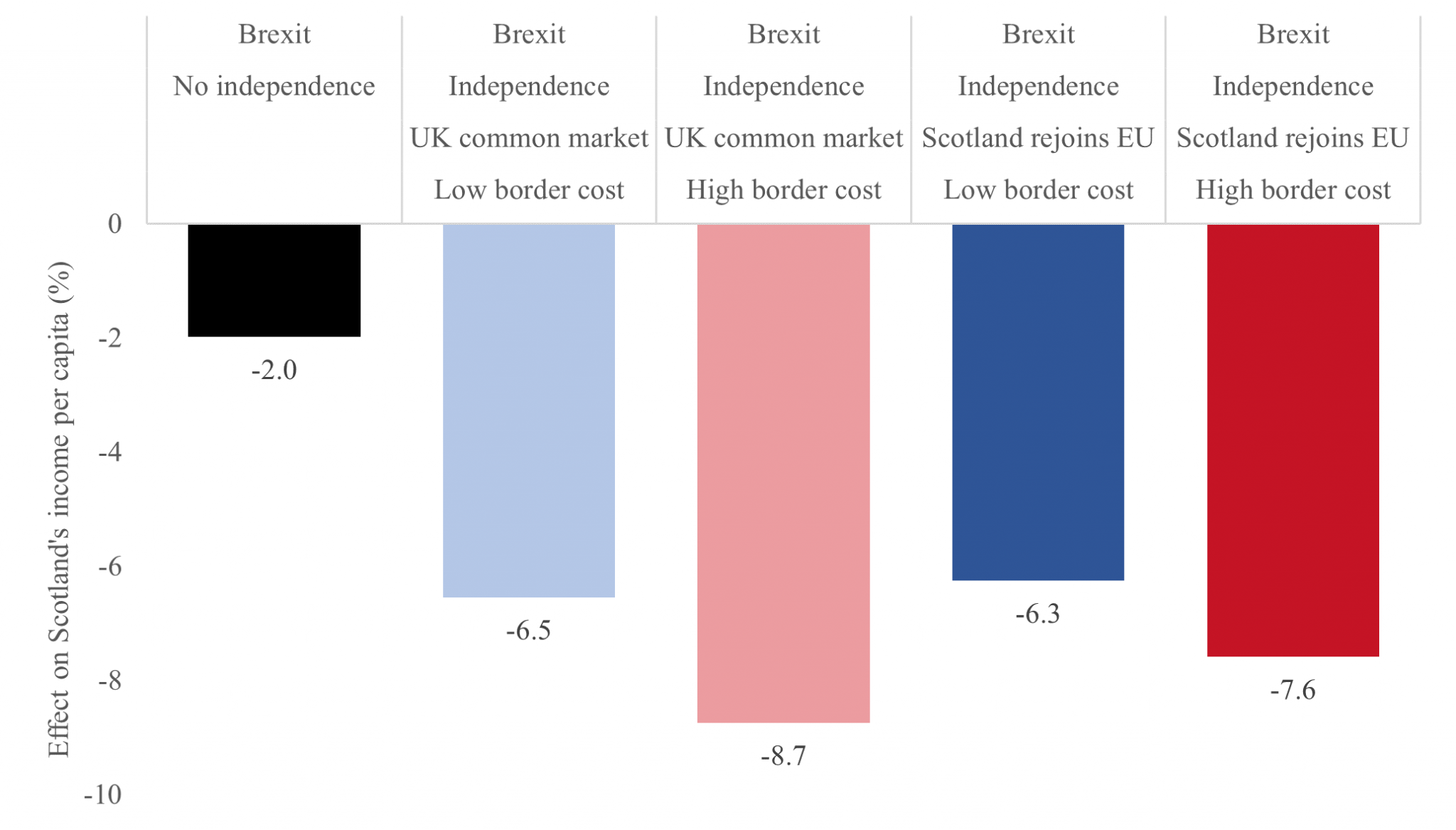 If Scotland remains in the UK, we estimate it will suffer a two per cent reduction in income per capita from Brexit. If Scotland then gains independence but remains in a common market with the UK, trade with the UK will decline due to the new border.

In the low trade cost scenario, the total effect of independence and Brexit is to reduce Scottish income per capita by 6.5%; in the high cost version, the figure is 8.7%. Even assuming a close, ongoing relationship with the rest of the UK, the losses from independence are two to three times larger than from Brexit.

Would an independent Scotland be better off inside or outside the EU?

Re-joining the EU cannot make up for the income lost to independence.

We can use the same model to assess whether an independent Scotland would benefit from re-joining the EU. Note that re-joining dismantles the barriers created by Brexit, only to erect them again at the border with the rest of the UK.

The deeper mechanism behind this result is quite simple. Because re-joining moves a set of barriers from one border to another, the net impact can only be positive if they are dismantled at the more important border.

Paradoxically, re-joining the EU only benefits an independent Scotland if independence has so hurt trade with the rest of the UK that the EU becomes Scotland’s largest trading partner. And the more independence reduces trade, the greater its economic costs.

We estimated that independence will eventually lead to the rest of the UK and the EU being of similar importance for Scottish trade. However, it is important to note that our model estimates long run effects, which will likely take a generation to emerge.

As such, given the incredibly close starting relationship, the rest of the UK will probably remain Scotland’s largest trading partner in the short to medium term.

Our analysis only looks at the impact of independence and re-joining the EU on trade costs, and the implications these have for trade and income.

In reality, Scottish independence has many other economic dimensions – which currency to use, which fiscal arrangements to make, and what the long run investment and productivity impacts will be – as well as other political and legal considerations.

If there is a referendum, voters will have to weigh all of these factors against each other. We hope that this work helps inform one part of the decision.

By Hanwei Huang, Assistant Professor at the City University of Hong Kong, Thomas Sampson, Associate Professor, and Patrick Schneider, PhD student in Economics. All three are based at the Centre for Economic Performance, LSE.