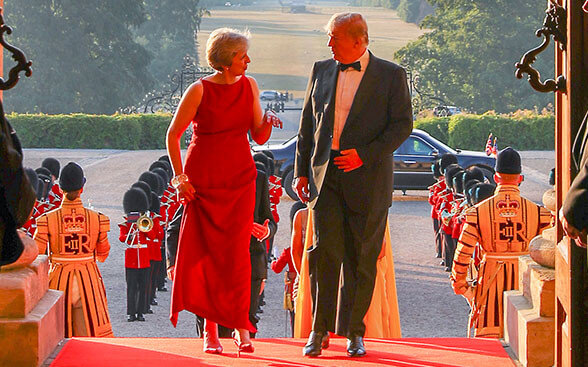 This week, Donald Trump has been meeting with NATO allies in Brussels, and yesterday he arrived in the UK for his first formal visit as President. The initial stage of the trip has, in true Trump fashion, captured headlines.

The tension crafted by the President has drawn attention to the complex political dynamic faced by the UK. It must now seek to tighten relations with an American President who is at once pro-Brexit; verbosely attacking key European partners on both security and trade; and strangely cosy with Russia.

The main priority for Brexiteers this week will be in gaining more concrete affirmations of the positive mood music emanating from the White House in relation to the transatlantic trade relationship.

Much of the economic case for Brexit was predicated on the prospect of more open trading regimes with major economic blocks like the US. Trump reiterated his view on Thursday that ‘Brexit is Brexit’. He admonished the UK for drifting back toward a more integrated relationship with the EU.

When defending the Chequers deal in Parliament on Wednesday, Theresa May was clear that, despite signing up to trading standards to secure access to the European market, it reserved the right to jettison them to facilitate a deal with the US.

Indeed, in an interview with The Sun, Trump has confirmed as much.

Much was made of Trump’s promises for ‘a big and exciting’ trade deal team by Brexiteers. Indeed, US Treasury Secretary Mnuchin had said in January that the UK would be at ‘the front of the line’ for a free trade agreement as soon as it was ready to negotiate.

Yet the constant parade of crises and controversies faced by the administration has meant that a complex new arrangement with the UK has dropped significantly down the list of priorities.

So far, one of the biggest tests of the UK’s allegiance to the increasingly fraught transatlantic security arrangement came with the Trump administration’s jettisoning of the Iranian nuclear deal. The UK stood in lockstep with France and Germany in chastising the US for abandoning a deal.

The newly appointed Secretary of State Mike Pompeo has clearly signalled that Iran is top of his agenda and, since being be sworn in last Thursday, he has made trips to Riyadh and Tel Aviv where discussion focused squarely on the perceived threat of Iran.

If the US is pursuing a more ‘aggressive’ stance on Iran, as Trump stated in his Brussels press conference, the UK will find itself having to decide, perhaps with a sense of déjà vu, between American multilateralism and European multilateralism in dealing with a Middle East crisis. In such circumstances, UK/US trade could become an important bargaining chip.

On other areas of security, the UK’s position has been less adversarial, but no less complex. On Syria, the UK continues to work closely with the US. Indeed, the joint operations against the Syrian Army in retaliation for suspected chemical weapons attacks have perhaps demonstrated that Macron, May and Trump aren’t as far apart on their approach to security problems as is often suggested.

This was also apparent in the welcoming of Trump’s North Korean nuclear diplomacy – although perhaps muted by the apparent similarity between the proposals for the North Korean deal and the ‘terrible’ Iranian deal.

The one significant security challenge upon which European leaders and the White House significantly diverge is Russia. The extent to which Putin’s Russia poses a threat to western democracies is a debate in which the UK, and Trump, are both subject and object.

Clearly many EU officials see merit in the narratives linking Russia to Brexit, and to Trump. Macron and various European agencies have been clear in their view of Russian interference as a major security concern. Guy Verhofstadt went so far as to call Nigel Farage ‘a fifth columinist Putin cheerleader’ and accused Aaron Banks of working with the Kremlin to deliver Brexit.

Yet despite concerns about the proximity of the US executive to the Kremlin, Trump has clearly (perhaps, transparently) come out swinging on the subject at the NATO conference.

He not only accused Germany of failing in its commitments to reach the ‘symbolic’ 2% defence spending target for NATO partners, a point conceded by many member states, but also of in being in bed with Russia over its gas supply deal that provides 70% of Germany’s requirements.

It’s not just Germany’s problem. Russian state owned producer Gazprom, whose logo has been plastered across televisions across the globe during the World Cup, has had a bumper year and now supplies 40% of all of Europe’s gas. It has a monopoly on the supply network from Russia into the continent.

Yet Trump’s initial statement is not a major departure in US policy, with Obama having made similar (albeit much more diplomatic) criticisms of European reliance on Russian energy in the midst of the Ukrainian crisis in 2014.

Trump clearly has identified similar weak spots to balance against his critics in Europe, and drawing concessions from NATO partners, many of whom are still implementing economic austerity programmes, to commit to defence spend increases may be a surprisingly effective strategy.

Those with a predisposition toward the conspiratorial might see hints of the Gerasimov doctrine – of confusion and contradiction – in Trump’s action: facilitating Russia by attacking Germany’s failure to challenge Russia, or driving wedges between the UK and Europe.

Others will simply see Trump’s tried and tested method of diverting criticism, by accusing his accusers of the things of which he has been accused. It is precisely what he has done in defence of his administration’s deeply unsettling child separation policy.

Trump’s trip has already seen some fireworks, and the President seems happy to claim some big victories already. Yet when the smoke clears it will be interesting to see what substantive policy measures remain.

By Dr Ciaran Gillespie, Teaching Fellow in International Politics at the University of Surrey