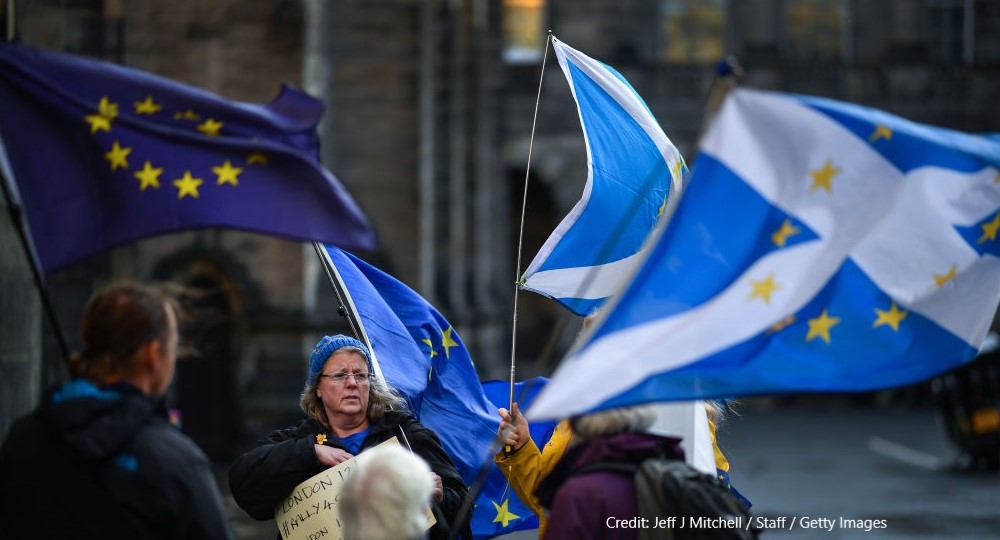 In the Brexit vote five years ago, 62% of Scots voted for the UK to remain in the European Union. The UK-wide vote meant they had to leave regardless.

In the five years since then, the process of leaving the European Union has generated new fractures in the United Kingdom’s own political union. The next five years could prove that union’s toughest test yet.

Brexit was always going to represent a test for the Union, and especially for relations between Scotland and England.

The Brexit vote, and the pursuit of the hardest of Brexits that eventually followed, revealed the extent to which political preferences north and south of the border had diverged.

That such a fundamental change in the UK’s constitution could be made without the consent of the Scottish electorate suggested that the United Kingdom could not, or would not, accommodate Scotland’s distinctive preferences.

The Brexit process also challenged UK devolution. EU membership had provided an external support system for devolution. Within those policy areas where devolved competence overlapped with EU competence, the obligation to legislate within the framework of EU law minimized divergence in the policies pursued by the UK’s four administrations.

All the constituent governments recognised that, without some action, new barriers to the free movement of goods and services could emerge within the UK as a result of EU exit.

But they differed on the form such action should take: new constraints on devolved competence that effectively recentralised power; or enhanced cooperation and co-decision between the four administrations.

The initial inclination of the UK Government was to recentralise authority, to remove uncertainty for businesses. The EU Withdrawal legislation, as introduced, gave sole authority over ‘retained EU laws’ to the Westminster Parliament, including in policy fields that were otherwise devolved.

The EU (Withdrawal) Act empowered the UK Government to ‘freeze’ the ability of devolved institutions to modify ‘retained EU law’, but these freezing powers (s12 regulations) have never been used.

Instead, the governments worked together to develop common frameworks to ‘enable the functioning of the UK internal market, while acknowledging policy divergence’. Respect for devolution was baked into the founding principles of the frameworks programme.

From the 154 EU laws identified as intersecting with devolved competence, eight common frameworks have been provisionally approved, with a further 15 operating on an interim basis. In 121 areas, officials emerged from ‘deep dives’ to conclude that no framework was required.

The frameworks programme represented a positive demonstration of intergovernmental cooperation and co-decision in the five years since the Brexit vote. But it has been significantly overshadowed by more politicised disagreements that have strained intergovernmental relationships and left a deep well of mistrust.

That mistrust emerged from the marginalisation of the devolved governments in Brexit negotiations.

Theresa May’s promises to seek agreement with the devolved governments on a shared approach to Article 50 negotiations disintegrated in the face of competing priorities.

The devolved governments were largely shut out of the key discussions that shaped Brexit policy, and were nowhere near the negotiating tables that brought the UK together with the EU.

Her successor has done little to restore trust. The Johnson administration has barely tried to seek or secure intergovernmental agreement on Brexit-related issues, and has proven less reticent about challenging devolution and reasserting the authority of Westminster and Whitehall.

This was exemplified in the United Kingdom Internal Market Act.

This legislation was motivated by the same issue that underpinned the frameworks programme: how to ensure that EU exit avoids creating new barriers for business and professionals trading within the UK’s domestic market. But in place of a co-operative, co-owned process that respected devolution, the Act was driven by the UK Government alone.

Moreover, it undermines devolved authority by limiting the reach of devolved laws. That it was passed in the face of considerable opposition and without the legislative consent of the devolved legislatures (as would normally be obtained, under the Sewel convention) led to a further deterioration of relationships between UK and devolved governments.

These powers will be used to allocate the UK Shared Prosperity Fund (replacing EU structural funds), levelling up funds, and potentially other infrastructure projects, bypassing the devolved governments and the established system of territorial finance.

Across the UK, these funds have faced allegations of pork barrel politics. In Scotland, they are primarily intended to increase the visibility of the UK Government, and promote the benefits of the Union.

Looking ahead to the next five years

The Brexit process has placed considerable strains on the relationships between the territories and governments of the UK. In Scotland, it has contributed to the resurgence of demands for an independence referendum.

Polls suggest Scotland is split down the middle on attitudes to independence, but the SNP’s success in the 2021 elections strengthened its mandate to pursue a referendum. That the authority of the Scottish Parliament to legislate for such a referendum is in doubt won’t stop a bill being introduced. Between the SNP and the Scottish Greens, there is a comfortable pro-independence majority to guarantee its passage. But without the agreement of the UK Government, referendum legislation may end up in the courts.

Yet, there is a palpable sense of the ground shifting since the election, and some form of referendum seems more likely.

For its part, Boris Johnson’s Government – which seems to be permanently in campaign mode – is already setting out its stall. UK ministers take every opportunity to emphasise the ‘broad shoulders’ of the Union. ‘Devolve and forget’ – an approach attributed disdainfully to its predecessors – has given way to a competitive centralising Unionism.

All of this suggests that the next five years may be as dominated by constitutional battles as the five years just passed. Those battles could make or break the Union as we know it.

By Nicola McEwen, senior fellow at the UK in a Changing Europe.