Brexiteers and Remainers were obviously both going to complain about the Chequers deal. Here’s why 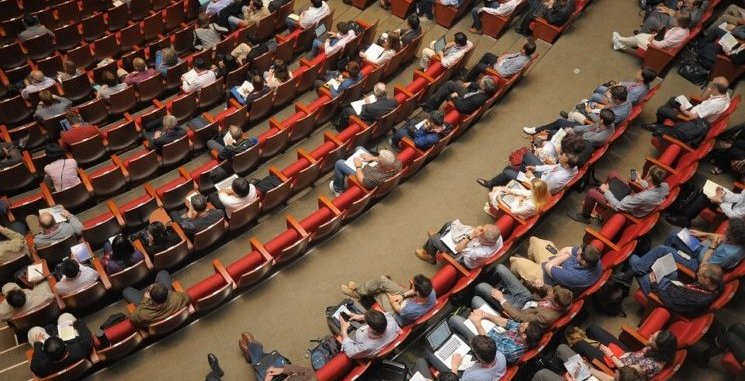 What do voters really want from Brexit? There is still confusion over both what this question actually means and what the potential answers are. Most surveys on the subject offer a binary choice – often between reducing immigration and membership of the single market, ignoring any other aspects of Brexit which might be important to voters.

Last week, we carried out a different kind of survey on over 7000 voters with YouGov, that asked people to rank up to 13 priorities for the UK over the next five years in order of importance, rather than asking them about specific Brexit outcomes.

Our list contained priorities associated with so-called Hard Brexit – around immigration, sovereignty and allowing Britain to do its own trade deals. The other priorities were areas that were also likely to be impacted by the outcome of Brexit, including the strength of the economy and the jobs market, issues of social justice, and reducing the amount of pressure on public services.

Economic growth is most important for the whole population

We found that the top-ranked priority overall was ensuring that the UK has strong economic growth, with a majority of people believing this was more important than the UK having control over its laws and regulations (54% vs 46%), being able to strike trade deals outside the EU (59% vs 41%), and reducing immigration (66% to 34%).

These results refute the idea that it is the “will of the people” to achieve Hard Brexit at all costs.

What the survey also made clear was that Leave voters regard the UK taking control of its laws and regulations as the most important priority for Britain in the next five years, followed by the ability for the UK to make its own trade deals.

Limiting immigration only to high-skilled workers came third in the list, with a second immigration option to reduce the overall numbers of migrants in the UK even lower down in fifth place (economic growth placed fourth).

The overall importance of the UK controlling its own laws held true for both Conservative and Labour Leave voters. 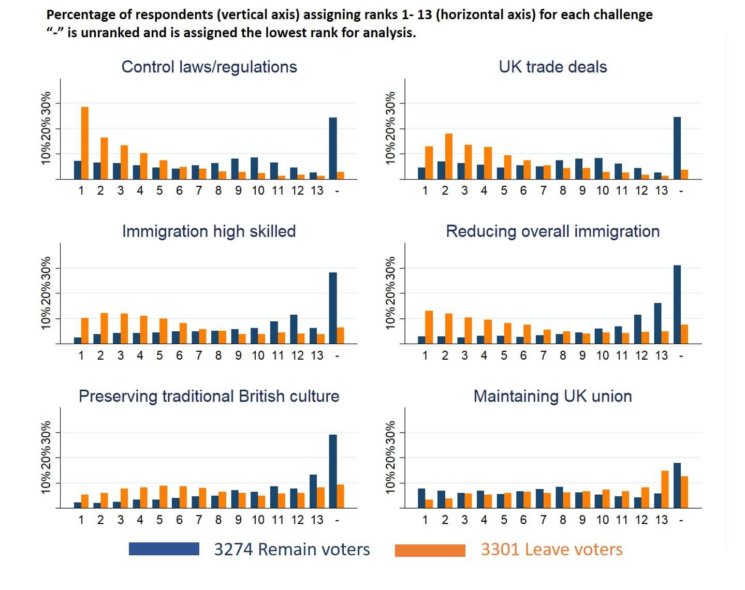 The survey also offers little comfort to those who wanted to believe that concerns about immigration or sovereignty were a proxy for underlying worries about other issues, such as pressure on public services, housing or jobs and wages.

Leave voters clearly ranked control of laws and restricting immigration above these issues, and the survey suggests that only a Brexit outcome which deals with these primary concerns will be acceptable to most Leavers. “Take back control” is a desired end in itself.

Despite the majority of Leave voters prioritising Hard Brexit this does not translate into a majority in the country as a whole because the referendum was so close and Remain voters favour strong economic growth over control, trade deals and immigration by very large margins.

At the time of the referendum, it was widely assumed that hostility to immigration was the main driver of the Leave vote. More recent surveys have shown that voters no longer think that immigration is the most important issue facing the country and other research has shown that negative attitudes towards migrants are softening. Our survey confirms that immigration is not the main priority for Leave voters.

This might be a difficult message for advocates of soft Brexit to hear. Much of their attention has been focused around trying to mitigate the effects of EU immigration or finding ways of restricting immigration under existing freedom of movement rules, or even (as the Chequers agreement attempts to do) giving up some access to the single market in return for ending freedom of movement altogether.

But all realistic soft Brexit options involve a continued role for the European Court of Justice in British law and compliance with some EU regulations.

This appears to be unacceptable to most of those who voted Leave. Remain advocates have done remarkably little to address the concerns of Leaver voters over the UK’s perceived lack of control within EU structures, either during the referendum campaign, or afterwards.

Last week, Theresa May presented the first serious proposal aimed at breaking the deadlock in negotiations with the EU, in the form of the “Chequers Agreement” followed by a more detailed White Paper.

Ending Freedom of Movement was the big win which the Chequers Agreement promises to deliver for Hard Brexiteers, but on the issues which our survey indicates are most important to Leavers – control of laws, and ability to enter into our own trade deals – the agreement does less well. There is considerable doubt about how much leeway the UK would have to enter into any meaningful free trade agreements with other countries.

Whilst the White Paper tries to portray the UK’s new relationship with the EU as a partnership, most commentators believe that the EU would retain significant elements of control; prominent Brexiteers have already condemned it as turning Britain into a “vassal state”.

Meanwhile, as Jonathan Portes has pointed out, the Agreement would still deliver a hit to economic growth because it does not cover services (which form the main part of the UK economy).

Our survey shows that all options will be unpopular with one group or another, and this could have serious political consequences for whichever party ends up having to deliver Brexit.

By Christabel Cooper and Christina Pagel. This piece originally featured in the Telegraph.