British citizens in the EU: the other side of the citizens’ rights coin 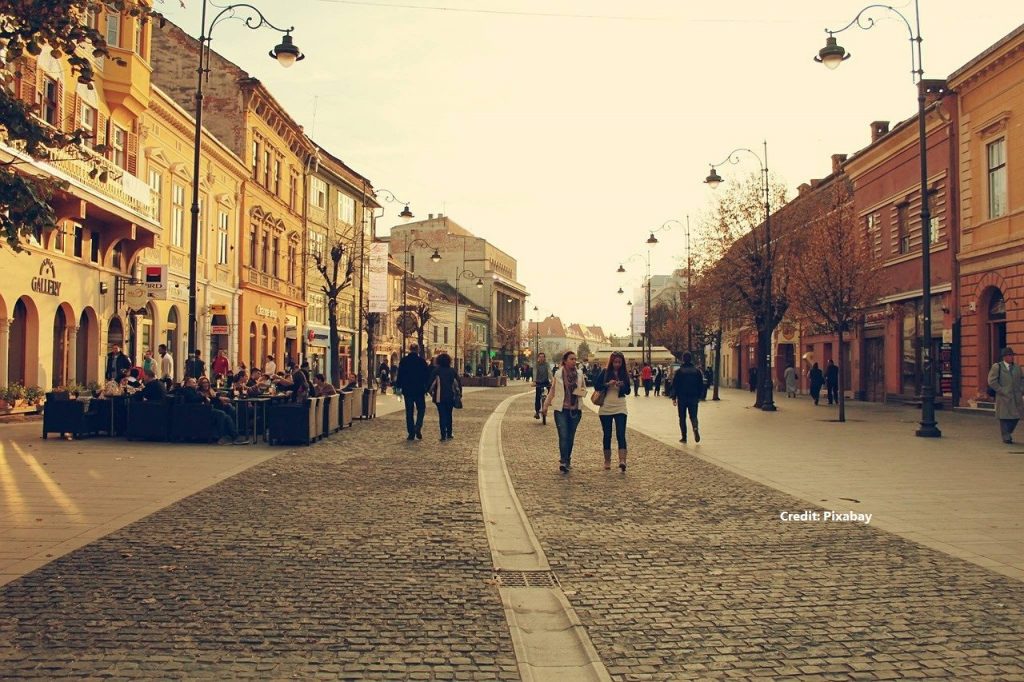 The headlines have been full of news about the pending 30 June 2021 deadline for EU citizens resident in the UK to register for the EU Settlement Scheme (EUSS). What has been notable is the relative silence about the other side of the coin: British citizens living in the EU.

With the 30 June deadline fast approaching in four member states—France, Latvia, Luxembourg and Malta—the late release of figures relating to the implementation of residence rights by the Specialised Committee on Citizens’ Rights is concerning, given that these are the only measure that we have of progress in respect to the implementation of citizens’ rights for British citizens living in the EU.

What progress has been made on residence rights for British citizens in the EU?

Across the EU’s member states (excluding Ireland, which is covered by the Common Travel Area), and four EEA states, countries had the choice of whether to operate a declaratory or constitutive system.

In simple terms, declaratory systems require residents to swap existing residence documents for the new biometric cards attesting to their status under the terms of the Withdrawal Agreement (WA).

Constitutive systems – which includes the UK’s EUSS – have a hard deadline for people to apply for residence status. In this case, right to residence for British citizens living in these countries before 31 December 2020 is contingent upon them applying, and having their eligibility checked.

The countries opting for this route are Austria, Belgium, Denmark, Finland, France, Hungary, Latvia, Luxembourg, Malta, the Netherlands, Romania, Slovenia and Sweden, and within the EEA, only Norway has chosen this route.

There are different deadlines for applications in these member states, as the table below outlines. 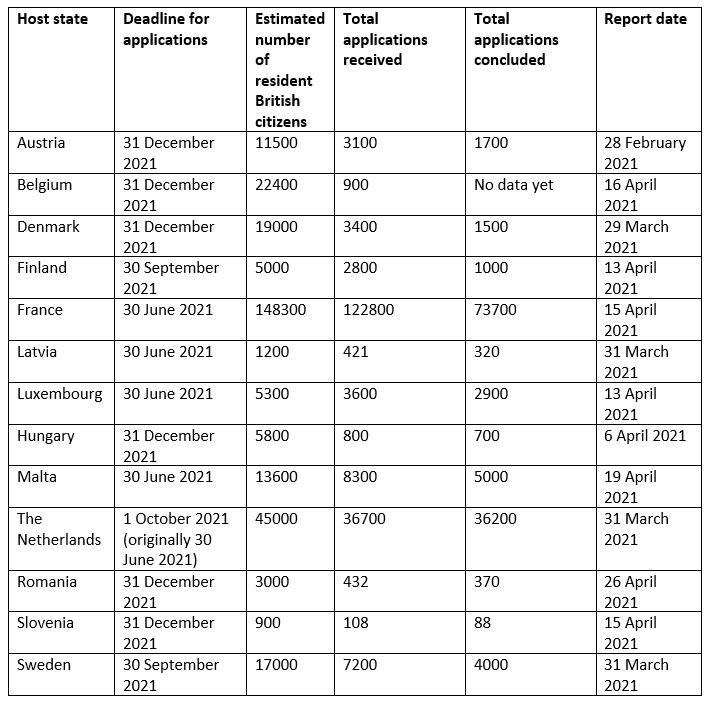 Source: Third joint report on the implementation of residence rights under part two of the withdrawal agreement, Specialised Committee on Citizens’ Rights 28 April 2021

Statistics about the number of applications received and concluded are also included in the report.

These are the only statistics about implementation in respect to British citizens living in the EU that have been released since all the countries operating a constitutive system opened their application processes.

The measure of progress used draws on estimates of the numbers of British citizens living in each of these member states, and the numbers of applications received.

These estimates are well-known for under-stating the scale of this population. As we have seen in the case of EU citizens living in the UK, the numbers applying for EUSS were far greater than the estimates had suggested.

The same could be true in France where, just like the UK, there has been no requirement for EU citizens to register for residence – and where there are likely far higher numbers of British citizens who have made France their home than estimates suggest.

This in should be cause for alarm, as if people fail to apply there are consequences. The day after the deadline for applications they will become undocumented in the places they may have called home for many years.

Without the residence status under the WA, these individuals might find themselves subject instead to domestic immigration laws in these member states which set a far higher bar for residence and settlement than those offered through the WA.

While there is a legal obligation for these members states (and the UK) to recognise reasonable grounds when dealing with late applications, should people after the deadline there are no guarantees of leniency.

Where this has not already happened, member states should issue guidance to those making decisions on applications about what constitutes reasonable grounds for late applications.

The people who are likely to fall between the gaps are the most marginal and vulnerable. Those living on low incomes. Those with disabilities, chronic conditions, or serious health issues.

Those who are not in a position to advocate for themselves for a range of reasons, including mental incapacity – but also children in alternative care, estranged from their (British) parents and likely with inadequate documentation. In other words, the changes to status brought about by Brexit will interact with existing cleavages and inequalities within the British citizens’ population living in these members states.

The statistics also reveal a significant timelag between applications being received and the new biometric cards – evidence of the right to reside –  being issued.

While causing anxiety for those waiting on their new documentation, the delays also speak to the challenges that member states are facing in processing the volume of applications.

Addressing the shortfall and the timelag

Originally, the Netherlands had a 30 June deadline for applications. On 31 May, they took the decision to the extend the deadline until 1 October due to a shortfall in applications.

I echo the call from British in Europe—the coalition of grassroots citizens’ organisations and the largest grouping of UK citizens in the EU—for France, Latvia, Luxembourg and Malta to follow suite.

Indeed, this seems most vital in France, the EU member state host to the second largest population of British citizens, where the statistics suggest a shortfall in excess of 25,000 British citizens.

What these extensions allow is more time for member states to reach out to those who haven’t yet applied, through dedicated communication campaigns.

The additional challenge here is that those yet to apply are likely to be the hardest to reach. Nevertheless urgent communication strategies need to be adopted in order to prevent them from becoming undocumented.

To tackle the timelag between application and the issuing of residence cards, this deadline could also be extended until the end of 2021.

This would reduce anxiety for those waiting on their status, but also allow time for officials, whose work may also have been interrupted by the challenges of the pandemic, to catch up with the backlog.

For a variety of reasons, British citizens in the EU do not make the headlines when it comes to Brexit and citizens’ rights.

With the deadline for them to apply for residence in France, Latvia, Luxembourg and Malta less than a month away, we need to turn attention to what might be done to avoid tens of thousands of them falling between the gaps of new provisions.