British citizens living in the EU and the Brexit withdrawal agreement 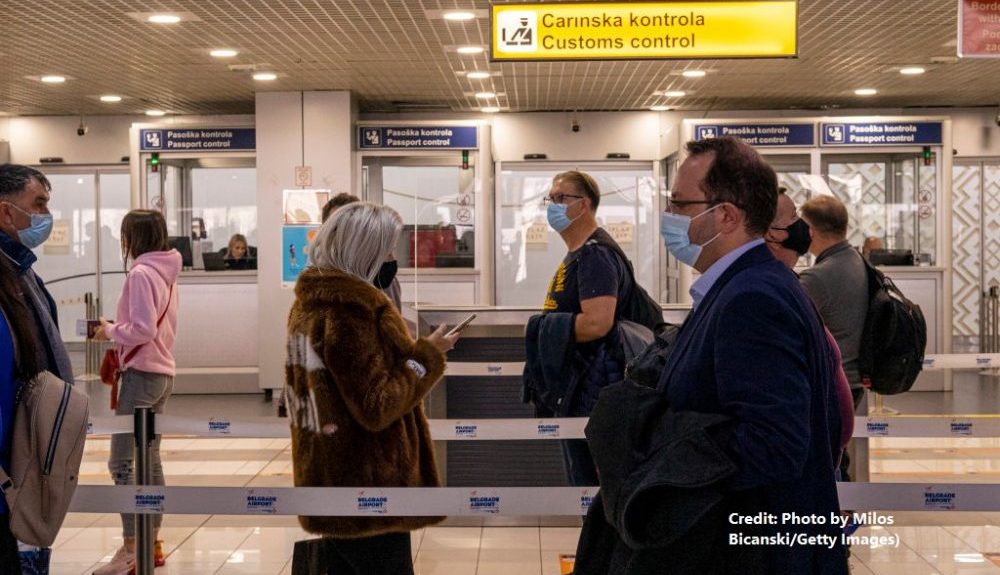 On 30 September 2021 the deadline passed for British citizens living in Finland, France and The Netherlands before 1 January 2021 to apply for their Withdrawal Agreement Residence Permits (WARP).

These countries are among the 13 EU member states who, like the UK with its EU Settlement Scheme (EUSS), opted for a constitutive system for implementing the Withdrawal Agreement’s provisions for citizens’ rights.

Such schemes require applicants to supply evidence to demonstrate that they were lawfully resident (before 31 December 2020) according to the criteria established through the EU’s Freedom of Movement Directives before they are issued with their WARP.

The remaining 14 EU member states are operating declaratory systems, which require residents to swap existing residence documents for the new biometric cards attesting to their status under the terms of the Withdrawal Agreement.

A week before the September deadline, the UK-EU Joint Specialised Committee on Citizens’ Rights issued their latest implementation report. While there has been considerable commentary about what this showed about applications to the UK’s EU settlement scheme, the other side of the citizens’ rights coin seems to have slipped from view.

In what follows, I outline some of the headlines about implementation in those countries operating constitutive systems, look into what the available data does and doesn’t tell us, and suggest directions for further research.

What do we know?

Overall, the statistics show that the number of applications made in all countries has increased since the last implementation report was published.

Table 1: Implementation figures for EU member states where the deadline has now passed Source: Fifth Report on Residence rights, Joint Specialised Committee on Citizens Rights * The figures on refusals in France do not systematically reflect numbers refused, and include duplicates

When we look at the implementation figures in countries where the deadline for applications has now passed (Table 1), in all cases the number of applications falls short of the estimated number of resident British citizens – with the exception of France.

France bucks the trend, with the number of applications seeming to outweigh the estimated number of residents. But despite this, we should approach this with caution.

A possible explanation for this outcome could be the fact that the application as a unit is not the same as the unit of the citizen – in other words, people might be submitting multiple applications.

Indeed, the notes accompanying the statistics make clear that these totals include duplicates (or reapplications from the same person). Of course, this is a possibility even in the case of countries where the number of applications is significantly lower than the estimated population.

Second, population estimates are estimates. In other words, they are not definitive of the size of a population and the methods used to produce them introduce all sorts of caveats.

As I have argued elsewhere, when working with such estimates, we need to look how these statistics are collected (who they count and don’t count), and the time lag between their collection and their deployment.

In the case of the population estimates of the number of British citizens living in France, these have not been updated since 2016 and therefore cannot account for changes in the size of the population since the Brexit referendum (through immigration, emigration, birth and death).

What this means is that we should not assume that the seemingly high number of applications in France means that all of those needing to apply for WARP have applied any more than in the case of the other member states whose deadlines have passed.

Indeed, this is comparable to the arguments made about the significant difference between the number of applications to the EUSS in contrast to the estimated size of the EU citizen population resident in the UK.

The constitutive systems for implementing citizens’ rights for British citizens living in the EU are as prone to administrative injustice as through the EUSS.

People will fall between the gaps, and it will be those who are already the most vulnerable and disadvantaged within these populations of British citizens. For example, those with ill-health and disabilities, living on low or no incomes, and British children in care.

When we look at the EU member states where the deadline is still to come, we can see that there is progress but the shortfall between applications and population estimates in all cases signal that there are a large number of British citizens resident in these states who have yet to apply for residency.

The statistics cannot explain this shortfall – there are likely other factors that come into play, such as how the schemes are being implemented, what the requirements are in terms of documentation and other arenas in life where this documentation is required.

For example, a British citizen living in Romania recently contacted me to explain that he had not yet applied for this WARP because the documents required to do this were also required for him to be eligible for his Covid-19 vaccination. 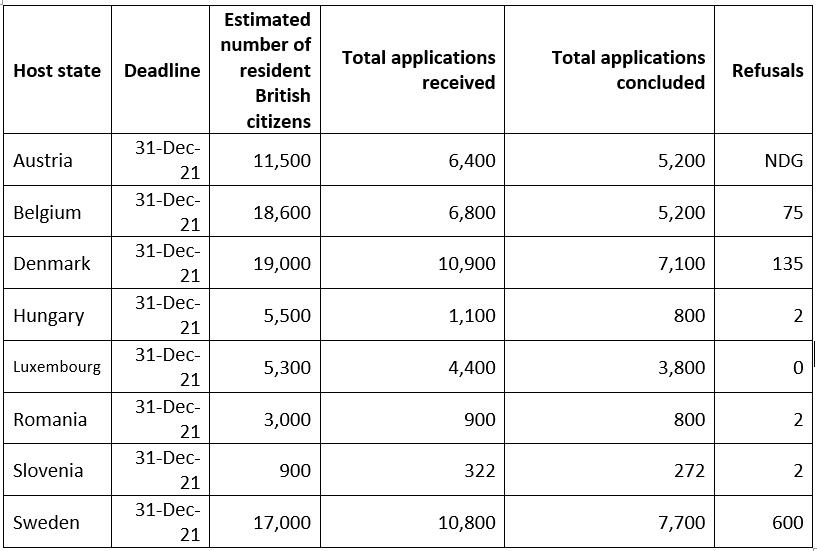 The statistics also highlight differences in the numbers of temporary and permanent residence documents awarded. 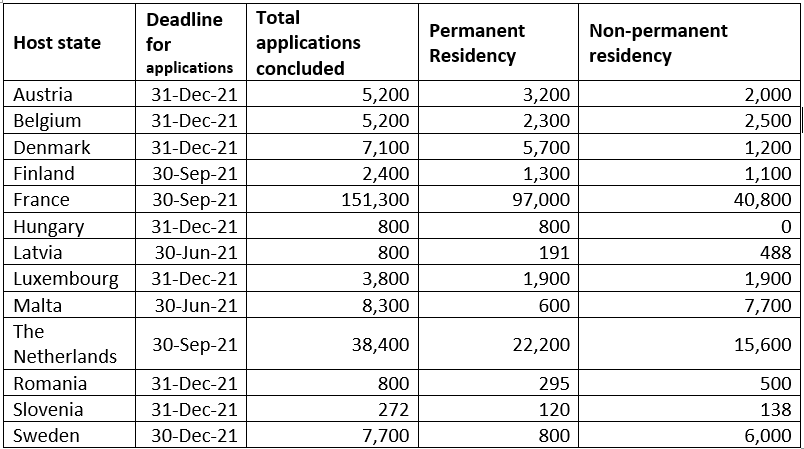 This is something to look out for in the future – as these temporary documents expire, people will need to reapply for permanent documents. This transfer of status from temporary to permanent is a flashpoint at which we might find people falling through the gaps.

And yet, the reporting and independent monitoring of these schemes is set to draw to a close in two years time.

This brief post reflecting on the available data concerning the implementation of citizens’ rights for British citizens living in the EU looks beyond the headline figures to offer some initial thoughts on what these can and cannot tell us.

To my mind, while they demonstrate the progress of the implementation it remains important to recognise that when it comes to systems of registration, there will always be a proportion of the targeted population who, for a variety of reasons, do not register.

Those who are unregistered—and become undocumented through this process—are often hard to reach and the most vulnerable within these populations. Indeed, the consequences of not registering are likely to have the most pronounced impacts on their lives.

My concern is that the two-year time-limited monitoring of implementation is insufficient in the context of a likely fallout which will continue for years, even decades.