Brussels’ gambit in the negotiations 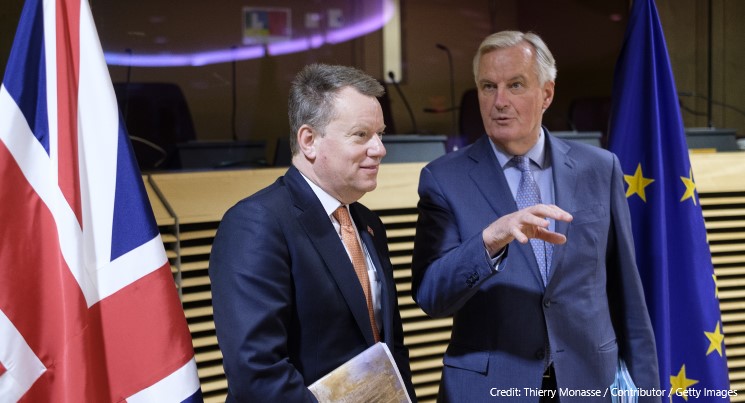 As expected, the opening round of the negotiations between the EU and the UK contained little more than a confirmation of an agenda hopefully leading to a trade deal in a not too distant future. Initial talks were conducted in a professional and constructive manner, and Michel Barnier could only identify serious disagreements on fishing policy, police cooperation and market regulation.

Things may look different though from the angle of negotiation analysis, which offers some useful clues on where the UK and the EU truly stand at this stage of the process.

With a deadline set for December 2020 to achieve a new relationship neither side seemed surprised by widespread disagreement. In a sense the lack of a joint press conference after the first round signalled that a new phase of UK-EU relations had already started. Most concerning, perhaps, is a lack of agreement on the eventual product of the negotiations: an overarching framework agreement – the EU preference – or a set of separate agreements, as the UK demands.

The Brussels gambit, however, suggests the UK position reflects a value claiming, distributive strategy, and a set of actions prioritising goals in direct conflict with those of the EU. Such efforts can entail offensive as well as defensive tactics, for example, by talking down the value of opponents’ demands or by preventing them altogether. This overriding concern with distributive consequences is expected in a situation where no settlement can make both parties better off compared to the previous situation (in this case, full EU membership).

Thus, the UK as a strict value-claimer, will insist on gains at the expense of the EU and relative to the status quo ante. Even if the British government frames Brexit as a lose-lose situation for both parties involved (which it does not) the objective would still be to lose less than its European counterparts.

A claiming strategy rejects concessions and resists demands from the negotiation partner: moves will include high opening demands, concealed information, uncertain priorities, targeted criticism, and the nurturing of a reputation for toughness. Indeed, the threat by Boris Johnson to terminate negotiations prematurely is evidence of a classic claiming tactic.

The chief negotiator, David Frost, will leave no doubt as to his commitment to a specific demand with the intention to lower the EU’s general resistance to UK positions. Moreover, to recalibrate the potential win-set towards mutual agreement he will attempt to rule out certain issues in the negotiation portfolio right from the start.

By contrast, the EU follows an integrative, value-creating strategy which aims to extend a cooperative solution that maintains ‘the size of the pie’, or perhaps tries to reduce the size of the pie in equal measure. Tactics will stress non-conflictual objectives, proclaim their attainability and tend to identify mixed motives on both sides.

A value-claiming EU asks for a sequencing of negotiations without the articulation of direct threats; yet it will insist on the provisional nature of partial agreements until a comprehensive settlement can be achieved. Ultimately, the final agreement will depend on a successful test-run of a compromise solution.

First, despite the small contribution of the fishing sector to the performance of the UK economy (0.1%), Johnson has been determined to use his political capital to raise expectations among family businesses in Cornish fishing communities. He demands a fairer distribution of fishing quotas, annually negotiated, to enable a sustained revival of this economic sector.

In his view French and Spanish trawlers have benefitted disproportionately from fishing rights in British waters as part of the historical agreements achieved under the Common Fisheries Policy. Yet, there is no mention of the fact that three quarters of domestic catch is exported into EU markets.

Second, the UK government appears unwilling to accept the European Convention on Human Rights (ECHR) as a legal basis for cooperative efforts among police forces when combatting crime and terrorism. Again, this fits the tactic of a value-claimer. It is, for example, ignored that in the current international (rather than EU) system of human rights protection the Strasbourg court overseeing the Convention holds only a subsidiary role vis-à-vis domestic laws and state institutions.

In fact, legal experts have noted that recent case-law has deliberately avoided challenges to national legal authorities and only dealt with matters after all domestic remedies had been exhausted.

Third, the UK has consistently rejected external rule-making authority on subsidies, state aid, and social or environmental standards. In fact, staying away from EU regulations and any supervisory powers of the European Court of Justice has become the mantra synonymous with the country’s political and economic independence after Brexit.

On the other hand the EU, as value-creator, articulated its major concern about a range of regulatory arrangements ensuring fair competition, market access and equivalent standards. Without a genuine level playing field, product and service dumping by a de-regulated ‘Singapore on steroids’ would pose a major economic challenge in close geographic proximity.

Not surprisingly, respective ‘red lines’ have been set by both teams at the outset of the negotiation phase. A briefing paper by the European Parliamentary Research Service, published in February 2020, offers a hint of the EU’s view of the negotiation process, highlighting a Canada (or South Korea) style free trade agreement as the logical zone of compromise. In line with the tactics of a value creator this reduces the range of viable options and, most importantly, provides the means to evaluate partial compromises on the way to a final settlement at the end of the process.

Moreover, the EU briefing paper highlights rules of origin, regulatory standards and financial services as embedded in the context of general UK-EU trade relations. For integrative tactics to work it is important to raise awareness for the complexity of single market issues, and their structural difference compared to the more isolated trade aspects championed by London.

If ignored these might be the root cause for lengthy, unstable, and potentially inconclusive engagements in subsequent meetings. As expected in analytical terms, only the sequence of further rounds of negotiations will reveal if there is momentum towards mutual concessions as reflected in the ability to speedily open or close controversial topics.

Finally, by accepting a tight timeline both parties recognise the exceptional nature of the envisaged free trade agreement. In contrast to other substantive issue areas of international negotiation, outcomes will be particularly sensitive to changing market conditions. If there is an inability to finalise precise terms or reach definite agreements this will show up in the way obligations are formulated.

Most likely, as has been the case with the Canadian trade deal, specific provisions will give effect to an incomplete contract, especially as regards implementation procedures and institutional review mechanisms. While this may offer a degree of much needed flexibility, these do carry the risk to be less durable and prone to conflict further down the line. Thus, commitment to an overly ambitious timeframe may go hand in hand with a final deal that is short on regulatory detail.

By Günter Walzenbach, Associate Professor in Political Science at the American University of Armenia, Yerevan, and a Senior Lecturer in European Politics at the University of the West of England, Bristol.