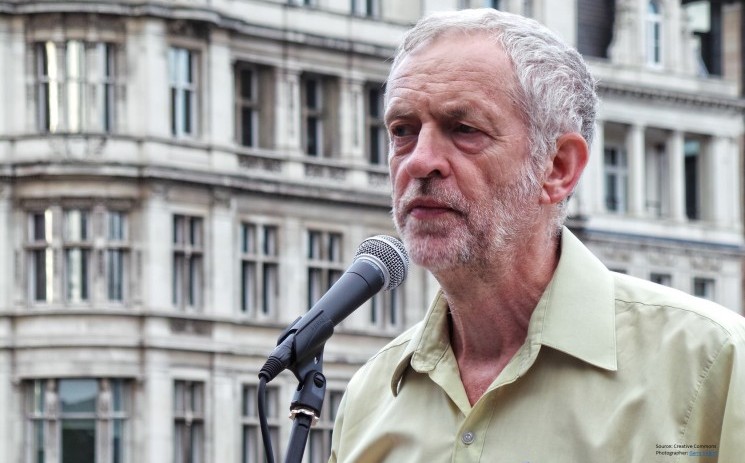 Eurosceptics are feeling confident. In recent weeks several events appear to have helped their cause. First, recent efforts to resolve Europe’s refugee crisis have heightened the salience of Turkey as a possible and important variable in Britain’s referendum campaign. E-mails and speeches by Eurosceptics underline how some are actively trying to insert the question of Turkey’s possible EU membership into the domestic debate.

Voters will not dwell on the detail but the claim that 75 million Turks could soon have closer ties with the EU will resonate among a public that already puts immigration ahead of all other issues. Second, two weeks on from the conclusion of the renegotiation evidence from the polls suggests that Cameron’s efforts have failed to produce a noticeable bounce in support for Remain.

Eurosceptics remain divided but they point to how they are keeping pace in the polls despite the offers from Brussels and their own internal weaknesses. Third, in recent weeks they have also been joined by several heavyweight Brexiteers, most notably the Mayor of London and Conservative MP Boris Johnson. Such was the effect of Boris that the pound promptly plummeted to its lowest level against the dollar in seven years.

There is no question that the arrival of Boris is significant and has become even more so since he declared his hand. Following Britain’s renegotiation there has been no noticeable rise in support for Remain. It was not supposed to be this way. Prior to the announcement of Cameron’s reform package many voters indicated that they would approve of a renegotiation that delivered restrictions on benefits for EU migrant workers, opt-outs from “ever closer union” and protections for non-eurozone countries. But none of the polls conducted since the end of the renegotiation reveal a significant shift toward Remain.

Either voters were not paying that much attention to the renegotiation to begin with or they have concluded that the wrangling has not made much difference to their vote. Whatever the reason, any hope Remainers had of using the deal to convert wavering moderates and gather momentum now looks misplaced. Nor have Eurosceptics seen an upsurge of support but they are claiming to have at least neutralized an anticipated bounce for Remain. 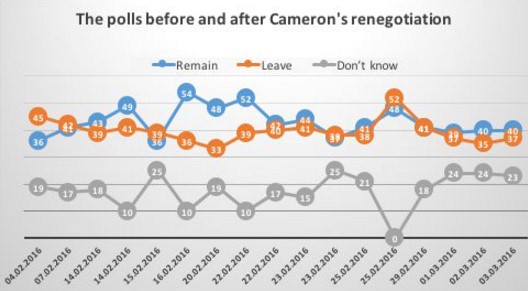 More worrying for Cameron is that the lack of any discernible bounce also applies to his own Conservative supporters. It appears that rank-and-file Tories have not been won over by their leader’s efforts to extract concessions from Brussels. On the contrary Conservatives remain seriously divided, typically breaking 45-35 in favor of Leave with the remainder undecided. Put another way among all voters who intend to vote for Britain to Remain in the EU only around one in four voted Conservative at the 2015 general election. This is where Boris could prove to be significant. Between now and June the charismatic populist could help to strengthen the firewall between Cameron and these softer, wavering Conservatives, keeping as many of them as possible in the Brexit camp.

Because of these divisions in the Conservative Party Cameron’s campaign will hinge heavily on his ability to mobilise a very different base of support to that which won him the 2015 general election – younger, socially liberal progressives who lean toward Labour, the Liberal Democrats or Scottish National Party.

This is not impossible but it is a riskier path up the mountain. If they voted at all last year then most turned out against Cameron and have been repelled by his rhetoric on refugees, austerity and, more generally, what he represents. This is where Corbyn, one of the most unpopular opposition leaders of all time, is key. The Labour leader need not agree with Cameron but he will need to start sounding far more enthusiastic about the case for remaining in the EU.

So far the Labour leader has sounded half-hearted at best, a point raised by his colleagues at the recent PLP meeting. Having previously criticised the EU for “operating like a free market” and failing to turn up the volume when making the case for staying in the EU Corbyn has failed to provide these voters with a compelling incentive for turning out. And worryingly for Cameron this is now cutting through to voters. Over 40% of the population now say they do not know what Labour’s position is on the EU. If this continues and progressive voters stay at home then the probability of Brexit increases significantly.

There is, however, some good news for Cameron. Like many Eurosceptics who converted to the cause during the 1990s Boris is clearly hoping to cut through by doubling down on arguments about sovereignty. His motive for backing Leave was reflected in his first question to Cameron after coming out for Out: “In what way does the renegotiation return sovereignty to Britain’s Houses of Parliament?” Yet while such arguments are popular on the Eurosceptic fringe new research suggests that this might be insufficient to turn the large number of Eurosceptics into actual Brexiteers.

As the new British Social Attitudes survey reveals, there are essentially two arguments that the Eurosceptics need to win if they are to build a majority – and they only appear to be ahead on one. First, they need to mobilise widespread public angst over the perceived threat that the EU poses to British identity. This feeling of a distinctive identity that is under threat is not insignificant — 47 percent of Brits share this concern. It is wrapped up in the very definition of Britishness that has long been defined against threats from across the Channel. This is where the refugee crisis and Turkey could play a significant role, increasing the number of Britons who feel anxious about a way of life under threat.

But the research also suggests that tapping only into these anxieties over identity might not be enough to push someone with Eurosceptic views into actually voting for Brexit. To support quitting altogether voters need to be convinced of the economic case for leaving. Put it this way, among those who felt both under threat from the EU and that Brexit would be economically beneficial, support for Brexit surpassed 80 percent.

But among those who had only been won over by the identity case but not the economic then Brexit remained a minority view, supported by around 40 percent. This would suggest that between now and June Boris and the Eurosceptics should devote less time to fairly obscure constitutional points and more time to addressing the fact that only around one in four voters currently believe that the economy will improve after Brexit. The Remain camp, meanwhile, need to ensure that the Brexiteers make absolutely no progress on the economic terrain and hope that the escalating refugee crisis does not push public concerns over national identity to all new heights.

This piece was written by Professor Matthew Goodwin, senior fellow at the UK in a Changing Europe and professor of politics and international relations at the University of Kent.