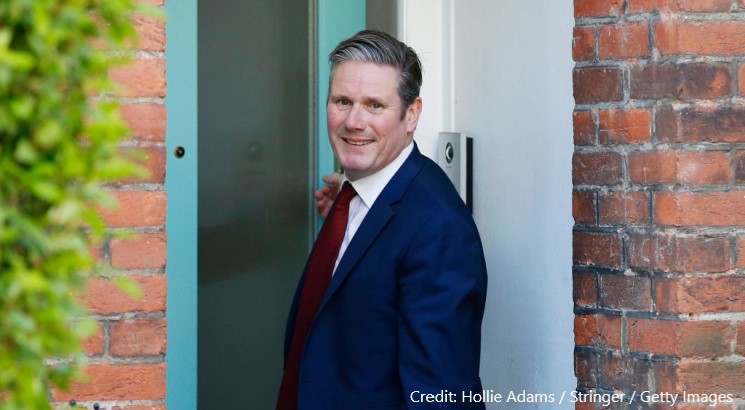 The scale of Labour’s electoral defeat in 2019, and current opinion poll figures might give some hope to Keir Starmer that, to coin a phrase, ‘things can only get better’. However, data from the British Election Study internet panel (BESIP) suggest that even from the very low point of the election defeat, there are still plenty of challenges ahead.

The BESIP collected data from individuals in the period after the general election but before the Labour leadership campaign had officially begun. As well as asking about how people voted, and a range of other issues, the survey also asked about key political figures that at the time were thought likely to feature in their party’s leadership battles to come.

For a range of key political figures, respondents were asked ‘How much do you like or dislike each of the following political figures?’, with an explicit prompt to choose ‘don’t know’ where they had not heard of them.

These data give us an insight into how Keir Starmer was perceived by different groups of voters. It is important to remember that these data were collected in late 2019, and do not reflect any impression the public may have gained of the leadership figures during the campaign itself.

First, looking at how well-known Starmer was at the time of the election perhaps gives some cause for optimism in that there is plenty of scope to make a good ‘first impression’ with the electorate.

Around half of voters said ‘don’t know’, suggesting that they either had not heard of Starmer or had not yet formed an opinion. This presents an opportunity to make a strong impression early on with those voters.

The perception of those who had heard of Starmer perhaps offers less grounds for optimism. Figure 1 shows the mean ‘liking’ score for groups of voters defined by their previous voting behaviour and vote in 2019.

This poses a significant challenge for the Labour party. It may be that a strong start for the new leader can begin to shift these figures, and perhaps improve them by turning the high numbers of don’t knows into more positive ratings.

However, if this doesn’t happen quickly (for example by the time of the local elections in 2021), urgent action will be needed to find ways to reconnect with this voting base.

In contrast, those who voted Labour in 2015 or 2017 and Liberal Democrat in 2019 are (marginally) more positive about the Labour leader than ‘loyal’ Labour voters. This may draw some of the vote which Labour lost to the Liberal Democrats in 2019 back into the party, potentially allowing the recapture of a few seats where the Remain vote was split in 2019.

Further evidence for this comes from looking at different groups of voters from 2010. Those who voted Labour in 2010 have an average ‘liking’ score of just 4.2 (in other words slightly towards the ‘dislike’ end of the scale), and those who voted Conservative in 2010 3.4. But among those who voted Liberal Democrat in 2010 this is 5.5.

Of the groups of 2010 voters, those who voted Liberal Democrat have the most positive view of Starmer in 2020, indicative of the high levels of electoral ‘churn’ between 2010 and 2019. 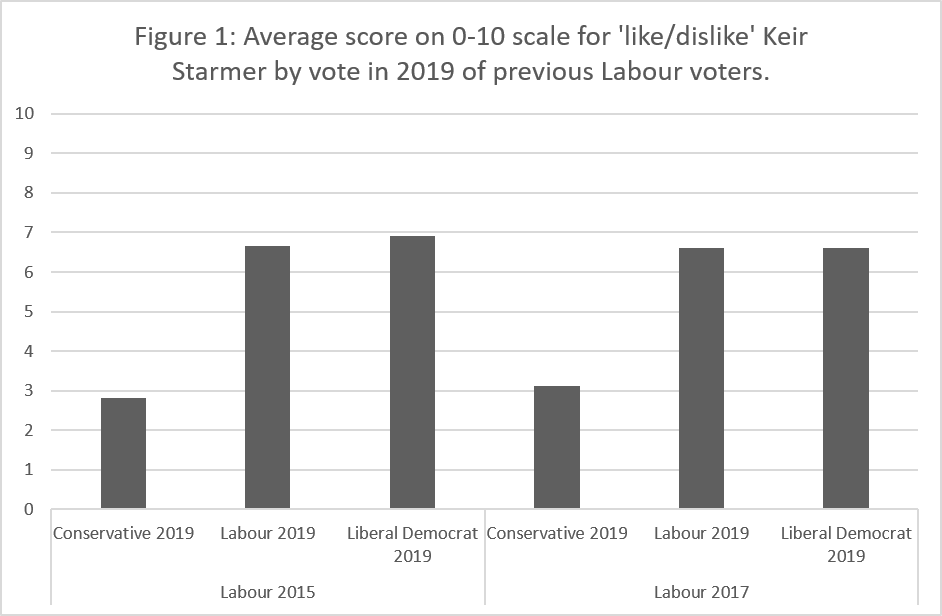 A key feature of British politics since the 2016 referendum has been the struggles of the parties, especially Labour, to hold together coalitions of voters who are divided on socio-cultural issues which crystallised around the Leave/Remain’ divide.

It is unclear how the divide will manifest itself in the coming months; it is possible that Leave and Remain will weaken as political identities, but it is unlikely that the divides in core values which underpin them will disappear.

Using the dimensions elsewhere, we can think about how the new Labour leader is perceived by voters holding different sets of political values. Each scale is divided into three parts creating a set of value positions which are ‘left’, ‘centre’ and ‘right’ on economic issues and ‘liberal’ ‘moderate’ and ‘authoritarian’ on the social dimension. These are combined to give nine groups within the political space.

Figure 2 shows that perceptions of Starmer vary substantially across these values divides and are as strongly connected to the ‘social’ divide as to the economic.

While those on the ‘left’ on economics are more positive than those on the right, there is a large gap within those on the left depending on whether they are also liberal, or towards the authoritarian end of the values scale.

It is the groups of voters in ‘not-liberal’ positions that have been particularly difficult for Labour to reach out to over the last three elections. These are the groups that were most likely to switch to the Conservatives in 2019 and who Labour most urgently need to reconnect with if they are to rebuild the ‘red wall’ (or indeed prevent it further crumbling). 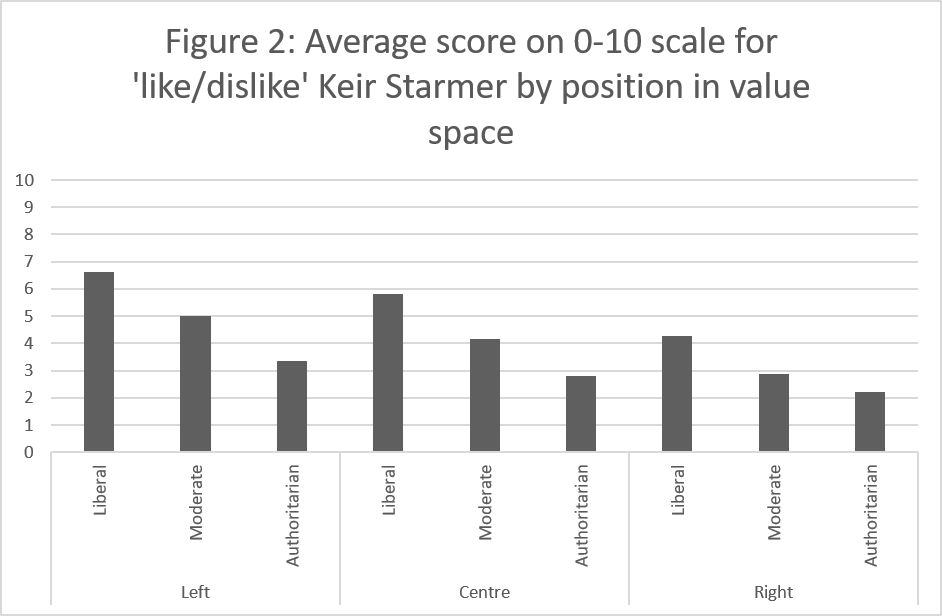 At the start of the 2019 election campaign Corbyn had mean scores of 4 or lower in all groups except the ‘liberal-left’, and here the average was below that of Starmer’s at 5.9.

Thus, while Starmer is more popular in these groups than his predecessor, the mean scores in the ‘not liberal’ (moderate and authoritarian) groups – regardless of economic values – are not above the mid-point of the 0-10 scale, suggesting slightly negative perceptions.

It could be argued that Starmer has not yet had a chance to reach out to those voters. After all, his priority has been to secure the support of the Labour party membership. But these data show that this will need to be an immediate priority if Labour are to secure substantial gains from the Conservatives in 2024.

Of course, the political landscape may change dramatically as a result of the ongoing pandemic. It is impossible to predict how voters will respond, or indeed how it will unfold. However, crises of the past have rarely resulted in more liberal social values even where they may change the economic settlement.

Should this indeed be the case, the response to the pandemic may make it easier for Starmer to pursue the kind of economic agenda he would like, but it could make reaching out across the liberal-‘not liberal’ divide even more urgent.

By Paula Surridge, Political Sociologist at University of Bristol.