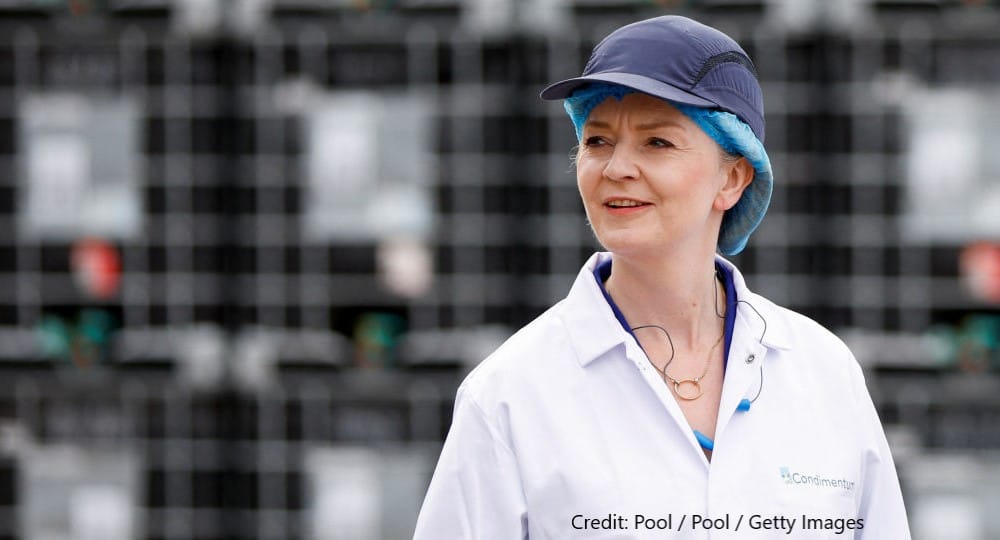 Liz Truss has made delivery the watchword of her Conservative leadership campaign. Although she has presented herself as the heir to Johnson (as opposed to an opportunity for a reset), she has stressed her track record in government as someone who delivers. If she becomes Prime Minister on Tuesday, will she be able to make things happen?

In reality her record is less impressive than she makes out.

She left barely a mark as Environment Secretary (save for her paean to British cheese and pork) – though her role in cutting spending that might have reduced the sewage on the UK’s beaches and in its rivers is coming under scrutiny.

The most noticeable thing about her tenure as Justice Secretary was her hesitancy to defend the independence of the judiciary over the Daily Mail’s infamous ‘Enemies of the People’ headline. That triggered her demotion to Chief Secretary – the No.2 job at the Treasury whose role is to say No to demands for public spending.

She did deliver a plethora of new trade deals as International Trade secretary – but most were rollovers of deals the UK inherited from the EU. Important for continuity, but usually in the interest of both sides to preserve.

Her new trade deals with Australia and New Zealand are a mixed bag – with some nuggets for UK businesses and citizens/consumers, but very good news for Antipodean farmers. Her approach to negotiation seemed to prioritise landing deals over making sure that they worked for UK interests. Her counterparts seemed to think that UK negotiators’ desperation to notch up deals made them a soft touch.

As Foreign Secretary she did what her predecessors Boris Johnson and Jeremy Hunt failed to do and secured the payment to Iran that allowed Nazanin Zagari Ratcliffe to be reunited with her family (though her husband said Truss’s subsequent actions failed his wife). But on Ukraine she has had at times to be reined in by Johnson – for example, when she urged Britons to go and fight there.

Her other self-proclaimed ‘achievement’ is the Northern Ireland Protocol bill – but so far that has failed to achieve anything (other than securing ERG support for her leadership bid): the DUP is still refusing to join the Executive in Northern Ireland; the EU is refusing to negotiate and has restarted and added to ongoing legal proceedings; and the UK is still being excluded from key EU programmes including Horizon Europe (Truss has initiated action on that). UK-EU relations are at an all time low, with a trade war a possibility. Neither she – nor Rishi Sunak – have given any indication of their end game other than asserting that hardball works.

Truss will enter No.10 with wider and longer departmental experience than any recent Prime Minister. But does that mean she will be able to govern well – particularly as she knows that she never came top of the ballot of MPs – a weaker starting point than any of her predecessors in government.

The first test will be the Cabinet she appoints. Theresa May balanced Brexit factions and ended up paralysed on the big defining issue of her premiership. Johnson went the other way completely – and prized loyalty over competence. Will Truss see the Cabinet as an opportunity to reward loyalists and supporters and exclude trouble makers – or will she make the best use of the talent and experience available to her? Can she identify competent deliverers rather than comfortable ideologues and put them into the jobs which will matter to people day-to-day – whether on energy, business, health, education, transport or the criminal justice system?

The second test will be whether she can crack what Boris Johnson never managed despite multiple resets – to put together a No.10 that works. Much of that comes down to the Prime Minister themselves – one who thrives on chaos is never going to be good for effective and orderly government. So can she set a clear direction for her government and then equip herself with the structures and staff who can make sure that direction is followed through? Allied to that is whether she decides to follow a Rees Mogg style culture war on the civil service, a Cummings style hard rain on the top ranks, or adopt a more constructive approach in order to get the best out of the government machine.

The third test is whether she is open to challenge and evidence on how to deliver her policy objectives. Many of her pledges in the leadership campaign showed a ‘field of dreams – if you build it, they will come’ approach – that if she asserted her policies would lead to growth they would; that if she said she was in favour of a small state that could be achieved without a massive deterioration of service levels or a hit to living standards. Will she be prepared to engage with the difficult advice? And can she resist announcementitis and stick to her big priorities and serious measures to address them?

The fourth test is whether she is at all interested in addressing the ethics issues that plagued  the Johnson government. Sunak cited the failure to govern ‘properly, seriously and competently’ as one reason for his resignation. Truss seems to have no problem with Johnson’s behaviour, and has said she would not need the services of an independent ethics adviser (two of whom resigned during Johnson’s premiership). Indeed, Truss has suggested she would vote to discontinue the Privileges Committee investigation into whether Johnson misled Parliament over ‘partygate’.

Related to that is whether she is prepared for more scrutiny. Her Northern Ireland Protocol Bill has already been denounced by a House of Lords Committee for its sweeping delegated powers – and more are likely in the so-called Brexit freedoms bill. Will Truss prove as dismissive of the benefits of proper scrutiny as her predecessor?

And finally will she manage to reconnect No.10 to the backbenches and unify the party? Johnson managed to look like he was leading a minority government because his party management was so woeful. Truss would become PM after a vitriolic leadership election. Her most urgent task will be to heal those wounds, but her reputation so far suggests she thrives on division. She will need great business managers at her side if she is to put the party back together again.

Then, the final test will be whether she can make it through to an election – and win.