Can Scotland withdraw and remain in the EU? 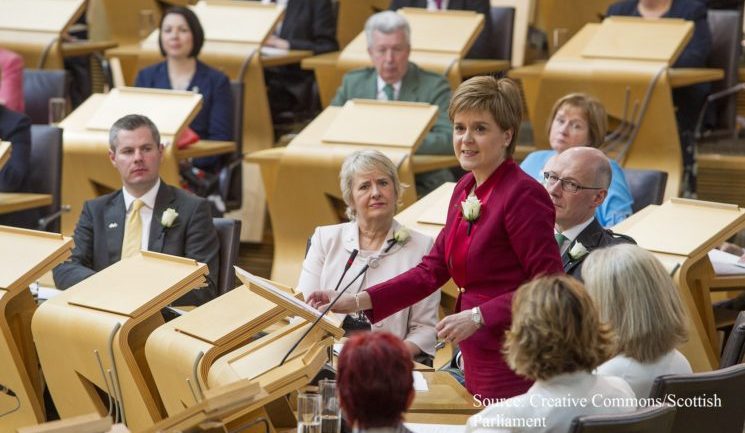 For the Scottish government the twin goals of withdrawing from the UK and remaining in the European Union are challenging but potentially attainable. The prospect is not a unicorn vision like the belief that it is possible to leave the EU while keeping current benefits of remaining in the single European market. The Scottish government’s strategy is about sequencing: withdraw first from the UK so that an independent Scotland can then remain a member state of the EU.

Regaining the sovereignty of the Westminster Parliament is an overriding aim for Brexiteers but for the Scottish Government it represents an obstacle to Scotland regaining its sovereignty. Nor does the SNP endorse the historic Irish nationalist interpretation of independence, Ourselves Alone. Instead, it takes an extroverted view of the world, with Scotland remaining in the European Union and Edinburgh sharing control of economic activity and immigration with Brussels.

There are two main hurdles that the Scottish government must clear in order to achieve its twin goals. The first is calling and winning a referendum on independence. The second is securing admission to the European Union as a member state. Since losing the 2014 independence referendum with 45 percent of the vote, SNP activists have been training to jump over the hurdle that a referendum sets at 50 percent.

The Edinburgh government’s newly released consultation paper on a second independence referendum sets out terms for a referendum without specifying a date. Before that happens, the First Minister, Nicola Sturgeon, needs a good reason for a second ballot and confidence that the SNP can win a vote for independence.

Withdrawal of the whole of the UK from the European Union is a fundamental constitutional change in how all Britons are governed even though they were on opposite sides of the fence in the referendum. Population differences meant that the 53.4 per cent of English voting to leave more than outweighed the 62.0 per cent of Scots voting to remain. Nicola Sturgeon regards this as good justification for a second referendum.

Theresa May and Nicola Sturgeon are currently shadow-boxing. Nominally, there is agreement that if the Conservative government secured an arrangement with Brussels that gave Scotland a special status within the EU this might remove the case for another independence referendum. This would require the Conservative government to demand something more than a soft Brexit for Scotland. It would require the EU to make unprecedented concessions on an issue of principle to allow a member state to be partly in and partly out of the EU. The EU leadership refused to make lesser concessions that David Cameron sought. Nor does it need to do so for Scotland to become an EU member, since full membership is a goal of the Scottish government.

Shadow-boxing will end before Easter when Theresa May formally notifies Brussels of the UK’s withdrawal from the EU. At that point EU institutions will begin negotiation with the UK government’s representatives. The SNP’s request for a significant role in the UK team negotiating with the EU will be dismissed in London because its political voice is insignificant there. A request to the EU for participation in discussions is also likely to be rebuffed by Brussels because Scotland is not an independent state.

The First Minister can then declare that these rebuffs are a sufficient reason for a second independence referendum. A bill for IndyRef2, as it is colloquially known in Scotland, can be introduced and enacted by the end of June 2017. The UK government can hardly object on principle, given that two years ago David Cameron accepted referendums on Scotland’s right to withdraw from the UK as well as the UK’s right to withdraw from the European Union.

The Independence Referendum Act need not specify when the ballot is held; it can leave this to a date approved by a vote of the Scottish Parliament on the recommendation of the First Minister. Sturgeon’s decision will be guided by a simple political calculation: what are the chances of winning? Defeat would be worse than a personal rebuff. It would mean that a majority of Scots rejected the SNP’s raison d’etre, independence.

As the result of the UK’s referendum on EU membership showed, the outcome of any democratic referendum is uncertain months ahead. Likewise, opinion polls are unable to predict the outcome far in advance. Currently, polls pose hypothetical questions about how Scots would vote if an independence referendum were held today.  They show insufficient electoral support for the First Minister to risk an immediate referendum. But hypothetical opinions are volatile and majority opinion can quickly change.

When Nicola Sturgeon reviews the chances of winning a referendum she will be under pressure from SNP activists who can argue that their opponents are disunited and vulnerable to defeat. Labour is not only internally in disarray but would require a credible response to the argument that a vote against independence is a vote for a Tory government to control Scotland until the 2025 British general election. The Scottish Tory leader, Ruth Davidson, can defend a Tory government in principle, but a year ago the Tories only appealed to one-fifth of Scotland’s voters.

Since the SNP does not have to call a referendum next year, a decision about timing can depend on ‘sooner or later’ events that can strengthen the case for independence. These include the government publicly dividing over whether to accept whatever terms the EU is willing to offer the UK for post-Brexit relations and/or the state of the British economy heading toward recession as the date for UK withdrawal looms.

Winning IndyRef2 would enable the Scottish government to ask Brussels to open discussions about Scotland remaining in the EU. Edinburgh could seek a transitional arrangement that would continue its participation in the single European market, including free movement of workers. In Edinburgh and Brussels the momentum would be to agree that Scotland would become the EU’s 28th member state. Simultaneously, the momentum of Brexit would be pushing the UK government to fly off in all directions.

By Professor Richard Rose author of Representing Europeans: a Pragmatic Approach (Oxford UP) and commissioning awardee of the ESRC UK in a Changing Europe programme.