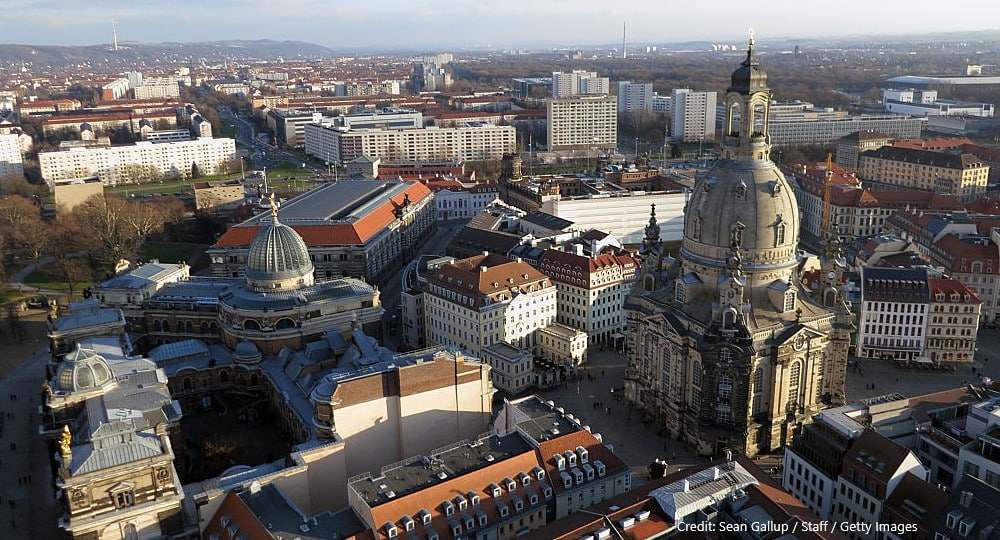 Sophie Stowers compares public perceptions of regional inequality in Germany and England and their respective policy responses, highlighting the lessons for levelling up from the German experience, which, whilst it has not always been straightforward, shows that reducing regional disparities is possible with significant investment and cross-party cooperation and support.

People are just a bit fed up. If there’s one recurring theme that springs out of UK in a Changing Europe’s report on levelling up, that is it. Granted, people are proud of where they’re from – fewer than a quarter of those we asked aren’t – but most feel that their area is hard done by. They don’t get their fair share of government funding. They feel forgotten, ‘left behind’, even, by central government. There’s not enough good housing, or good public transport. They want better access to healthcare, and there aren’t enough well-paid job opportunities.

It is no surprise, then, that we found that a majority of people agree that the government should employ some kind of redistributive policy to tackle regional inequality. That’s exactly why Boris Johnson’s commitment to ‘level up’ the country resonated so strongly back in 2019. Despite being caught on camera over the summer bemoaning the redistribution of funds from wealthier regions to ‘deprived urban areas’, Prime Minister Rishi Sunak has recognised this and recommitted to the levelling up agenda on the steps of Downing Street, even re-appointing Michael Gove as Levelling Up Secretary to ‘finish the job’.

In the meantime, the scale of inequality in England has triggered a wealth of policy thinking on how to close the gap between rich and poor regions. Politicians and think tankers have called for widescale devolution, streamlining of regional and local authority decision making and, most importantly, extensive investment in the levelling up agenda. And one country above all is mentioned time and again as best in class in this regard.

Johnson was one of the first in government to compare the scale of the problem in the UK to German reunification. Post-1989, with the productivity of the former East Germany around 60% of that in the West, the achievement of equality of living conditions between the two regions was given constitutional status. Thirty years on, almost €2 trillion has been spent in the pursuit of regional equality, and Länder have been given significant political and fiscal powers independent of the federal government.

And there has certainly been progress. Cities such as Dresden have made significant progress when it comes to economic development, catching up with their Western counterparts. The average output per worker in terms of productive hours in the former East is now at 85% that of the West. Even more remarkable is the cross-party political consensus that has developed in the last thirty years on the most appropriate measures to tackle regional inequality and further devolution.

So, Germans set the benchmark when it comes to levelling up. Yet ask them what they think about inequality and their local areas, and a sense of deja vu descends. Because – guess what – their areas don’t get their fair share of government funding. They feel forgotten, ‘left behind’ (‘abgehängt’, in this instance) including by central government. There’s not enough good housing, or good public transport. They want better access to healthcare, and there aren’t enough well-paid job opportunities.

And, despite significant progress, there are still real divides between East and West – not dissimilar to the North-South divide that our English respondents often cited. There are significant regional disparities when it comes to broadband, health care and housing. Policies aimed at improving parts of the country and tackling  ‘brain drain’ and democratic decline have been criticised by some as a ‘hanging basket’ approach: the creation of decorative town centres surrounded by poorer boroughs. Some in the poorest areas of former East Germany even describe themselves as ‘second class citizens.’ They have little confidence government will notice their problems – precisely as echoed in our survey of England, in which only 9% of those surveyed believed the government cares about their area.

The fact that this phenomenon is occurring in a country which has channelled around £71 billion annually into tackling regional inequality since 1990 (as compared to the £4.8 billion levelling up fund set up by the government) is hardly grounds for optimism. Germany was even first to create a version of the Levelling Up ministry – the ‘Heimat’ – a controversial institution designed in 2018 to tackle divisions between metropolitan and urban areas. Yet swathes of the public still feel forgotten and as if they are struggling compared to their peers across the country.

Clearly, Germany’s attempts to tackle regional disparities post-unification have not been straightforward. Rather, the path has been a long, onerous, and expensive one. But perhaps that is the true lesson that UK politicians need to take when it comes to levelling up: there can be no short-term, one Parliament quick-fix. The gradual process we’ve seen in Germany – which for all its flaws is still a more equal economy than the UK – has been the result of a sizeable and long-term investment by the federal government. Not only that, but cross-party agreement on the regional equality plan has been key to ensuring it lasts despite changes of government and Chancellor.

Conversely, England’s equivalent levelling up plan seems to have faltered with just two changes in Prime Minister in as many months.

However, it is important to state the obvious: post-reunification Germany is a very different place to the UK in 2022. The scale of the German challenge – uniting two countries with significantly different political and economic cultures – cannot be underestimated. If some economic convergence could be achieved in those difficult circumstances, British politics should retain some hope of tackling regional inequality in the years ahead, albeit with the right policies, significant investment, and political cooperation.

No-one really wants to hear that addressing regional inequalities will be difficult, expensive, and will take a long time. Michael Gove certainly won’t. Politicians also won’t be thrilled to hear that it might require working closely with the opposition, and that any change might not actually make much of a difference to public attitudes. But if we’re really to learn anything from the Germans, it’s that when it comes to tackling regional inequality, we might have to settle in for the long haul.

By Sophie Stowers, Researcher, UK in a Changing Europe.

Read UK in a Changing Europe’s report on public attitudes towards regional inequality and levelling up here.