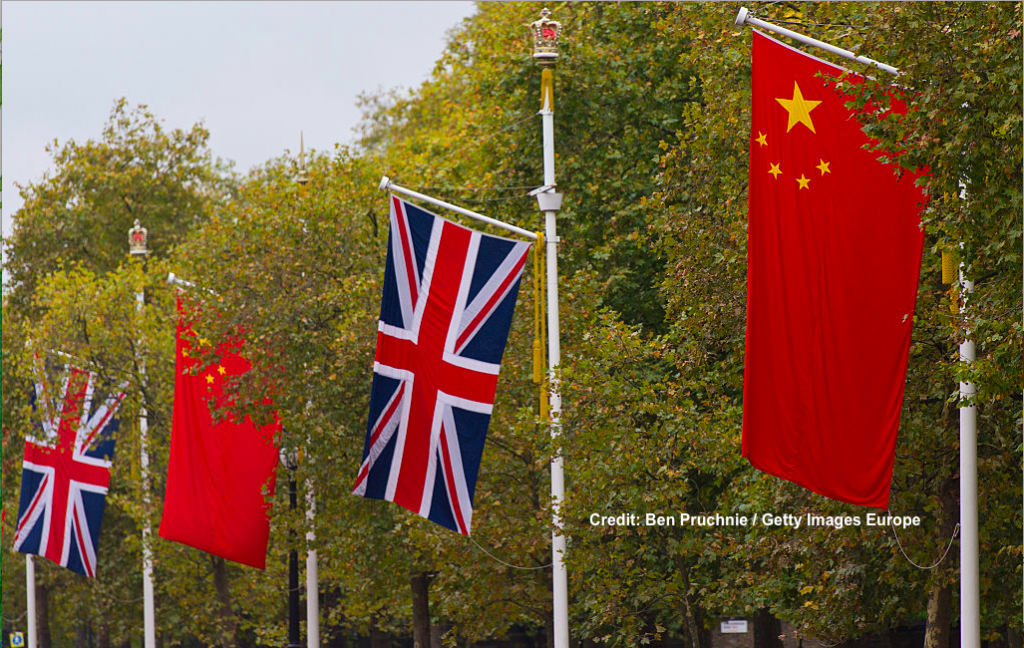 Early in the premiership of David Cameron, the UK moved toward a policy of positive, largely economic, engagement with China, termed the ‘Golden Era’ by the Chinese side.

It was based on the idea that China would be a new market for British business, and was marked by important milestones such as the establishment of London as a major centre for renminbi (RMB) trading.

Under the May Government, there was more concern about security, for instance with a long-term proposal to build a new nuclear power station at Bradwell in Essex, but the overall position did not shift significantly.

Under Boris Johnson, Chinese investment was initially welcomed, and in January 2020, it was announced that Huawei, a major Chinese telecoms firm, would be given permission to make limited contributions to the UK 5G network.

In 2020, most of the UK’s positions on China changed profoundly. The Covid-19 epidemic, first detected in China, spread quickly to the rest of the world including the UK, severely damaging China’s reputation both for health control and for openness and willingness to share information promptly.

The pandemic allowed a space for those concerned about a Chinese firm’s presence in the UK 5G network to make their voices heard more loudly, notably in the highly Beijing-sceptic China Research Group of Conservative politicians established in April 2020.

In July, China passed a National Security Law for Hong Kong, which prompted fears that civil liberties would be heavily restricted, and led the UK Government to offer residence to holders of British National (Overseas) passports, to Beijing’s fury.

In addition, there was wide coverage of the oppressive conditions in camps in Xinjiang holding Chinese citizens of Uighur ethnicity for ‘re-education,’ further damaging China’s international reputation. One major survey put China’s unfavourability rating in the UK, after the pandemic, at 83%.

Yet there are still major points of connection between the UK and China. Over 100,000 Chinese students are in UK higher education institutions, both countries have affirmed a need to work with each other on climate change, and they are both permanent members of the UN Security Council.

The UK currently lacks a clear policy toward China. In the context of heightening tensions, many in the UK have simultaneously argued that it is essential to impose severe sanctions on the country for human rights violations, but also to maintain a healthy and positive trading relationship.

The UK found it hard to speak firmly to China while staying separate from the Trump administration’s policy of all-out confrontation, although a more traditional foreign policy under Biden will provide more opportunities for US-UK cooperation on trade negotiations and human rights issues.

The Government’s desire to create a ‘D10’ grouping of ‘likeminded democracies’ to present a united front to China has promise, but runs up against several problems.

First, the majority of likeminded liberal democracies are members of the EU, yet current British foreign policy has found it hard to articulate a means of positive engagement with the bloc on China.

Second, Asia-Pacific democracies mostly have very strong trade relationships with China, and have less freedom of manoeuvre against China.

Third, many regional democracies aren’t all that liberal (think the Philippines, or India); and one of the most ‘like-minded’ countries on containing China, Vietnam, isn’t democratic at all. The language about ‘democracies vs China’ is a rhetorical holding position, not a strategy in itself.

Are there options for the UK to engage China? Certainly. Higher and secondary education in the UK is highly attractive to the Chinese middle class, although providers will need to resist attempts to influence academic content (like via the extraterritorial clauses of the new Hong Kong National Security Law) sent into China or Hong Kong.

UK financial services are also attractive to China, as are its pharmaceuticals and some high-end manufacturing. Legal services might be a particular growth area, as international contractors are far keener to arbitrate disputes in venues which use common law derived from the English system rather than domestic Chinese law.

Chinese investment in the UK is likely to come under much more legal scrutiny than in the past after the passing of a new National Security and Investment Bill; but there is a difference between ownership of security- sensitive assets, and plain vanilla investment in ‘dumb’ infrastructure, property or assets.

Right now, the UK public and private spheres are deeply uninformed about China, at a time when its middle classes know plenty about Britain (at least in terms of its value as a centre of education and tourism).

Greater ‘China literacy’ is necessary; not just Mandarin language, which will always be a minority pursuit, but greater awareness of politics, society and culture in the world’s second biggest economy and most powerful authoritarian state.

The one area that will continue to see friction between the two sides is the difference in values between an authoritarian society and a liberal one. China will continue to complain about ‘interference’ in the face of British (and western) criticism of policies in Xinjiang, Hong Kong, and the increasing restriction of space for debate within China itself.

However, China itself has become more open about criticizing the internal affairs of other countries (for instance, its foreign ministry tweeted to condemn the killing of George Floyd), and must therefore expect that, as a global power, it will continue to attract criticism.

None of this is likely to affect the fundamental issue. The UK is important to China, but it does not sit in the same category of engagement for Beijing as the US, Japan, Germany, or Russia.

This means that the UK is less likely to be able to influence China, acting alone. But neither is the UK particularly dependent on China. The challenge is therefore to develop opportunities, and minimize risks, for a confident, friendly and frank relationship.