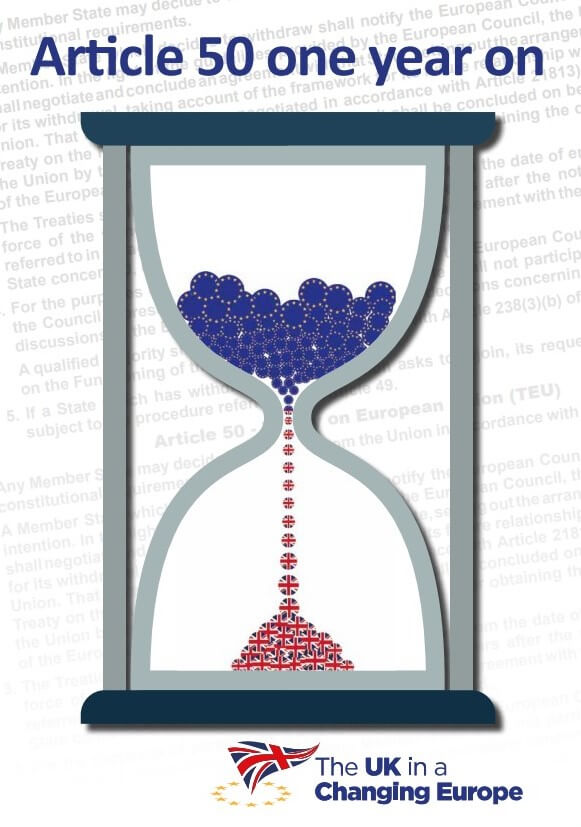 Significant political and economic uncertainty characterises the Brexit process one year after the UK triggered Article 50, a new report by academic group The UK in a Changing Europe finds.

Across several policy sectors, a lack of clear direction is affecting the ability to plan for the future.

The situation is far from stable. The report Article 50 one year on finds, demographic changes are pulling public opinion in a pro-European direction. By 2021, the electorate will be 52:48 Remain and by 2026 it will be 54:46 Remain as a result of rising education, rising ethnic diversity and generational change.

Public opinion about immigration appears to have shifted: it is viewed more positively and as a much less salient issue, especially as the cabinet and country have moved in a more liberal direction. However, the report finds there is no clear vision of immigration policy after Brexit, let alone any concrete policy decisions.

When it comes to economics, the report finds:

Taking countries that matched UK growth prior to the referendum, academics* found that by the third quarter of 2017 UK GDP was approximately 1.3% lower than it would have been if the UK had not voted for Brexit

In Northern Ireland there are fears that the problems facing the island of Ireland are either misunderstood by London or wilfully ignored. The UK has not managed to provide the necessary detail to reconcile the need to avoid a hard border and leaving the single market and customs union.

In aviation, the stakes in the negotiations are high, with the most likely scenario being that market access will be lost by both sides and UK industry and consumers will be hit especially hard. In agriculture even a relatively ‘soft’ Brexit would lead to small producer price changes. Cereal and dairy farms will be relatively unaffected by post-Brexit changes to prices, while many beef and sheep farms will be more vulnerable.

Legally, while the Withdrawal Bill symbolises the fact that the UK is ‘taking back control,’ transition means the UK will remained bound by its EU obligations while lacking voting rights.

Professor Anand Menon, director The UK in a Changing Europe, said: “When Theresa May triggered Article 50 she said she’d provide citizens and businesses with ‘as much certainty as possible, as early as possible’. One year on, our report shows she has failed to do this.

“Uncertainty reigns. This is having negative consequences for business and key sectors including agriculture, fisheries, aviation, the environment, higher education, the health service and financial services.

“In politics, the lack of an overall Conservative majority has created political instability and unpredictability. In Northern Ireland Brexit is destabilising the region and in Britain tensions between Westminster and the devolveds have been heightened.”

The 28 chapter, 73 page report was written by academics from The UK in a Changing Europe and covers what has happened since Article 50 was triggered, the negotiations and process of Brexit, politics and economics over the last year as well as what is likely to happen in key sectors. Report authors include John Curtice, Catherine Barnard, Jonathan Portes, Rob Ford and Anand Menon.