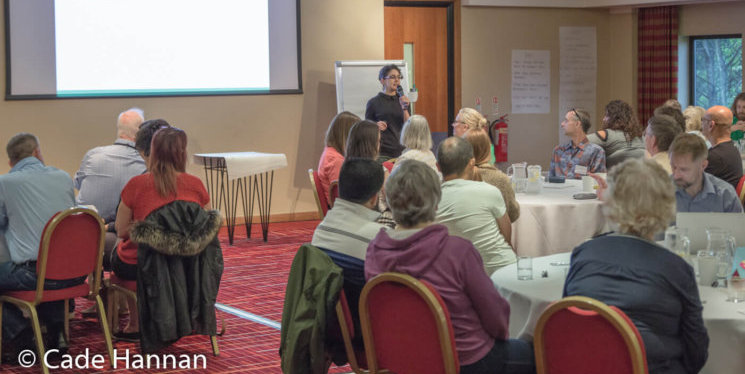 The Citizens’ Assembly on Brexit has just completed its first weekend of deliberations. As an earlier post explained, the Assembly is a gathering of people from across the UK who have been randomly selected to reflect the make-up of the electorate. They are meeting over two weekends to learn about options for the form Brexit should take – focusing on the issues of trade and immigration – discuss what they make of these options, and draw conclusions. Their proposals will be written up in a report and delivered to policy-makers in parliament and government.

We knew by the start of the weekend that we had prepared well. We had selected a hotel at Manchester Airport with good facilities, a central UK location, and ready accessibility by road, rail, and air. Working with ICM, we had recruited the Assembly members. As we reported last week, that recruitment process went astonishingly well, allowing us to hit our targets for representing different parts of the population.

To help guide our planning, we had gathered an Advisory Board who were superb in both their wealth of knowledge and their willingness to give up their time for the project, including academics and campaigners on both sides of last year’s referendum debate and people whose job it is to give balanced information on Brexit.

In consultation with the board, we had devised a plan for the Assembly and prepared briefing papers that set out the key issues in a balanced and accessible way. We had engaged Involve – perhaps the UK’s leading experts in facilitating this kind of event – to develop and deliver the programme of sessions for each weekend. We had assembled a line-up of speakers with vast experience and a healthy variety of perspectives.

Even with the most careful planning, however, you can never quite be sure how an event such as this will go. Will the Assembly members actually show up? Will the expert speakers convey their points in a way that non-experts can make sense of? Will the programme give the right amount of time at each stage for members to absorb the information, hear the arguments, explore the ideas, and express their own viewpoints?

Writing this post on Sunday evening, on the train back home from Manchester, all I can say is that I am delighted with – indeed, slightly stunned by – how it all went.

The weekend started with something truly remarkable. We were aiming for an assembly of 45 members. The standard approach for events where members of the public are invited to talk about politics is to over-recruit: some people are bound to drop out at the last moment or simply not turn up on the day.

Often the assumption is that a third or more of those recruited will not appear. We were confident we could do better than that. Still, we initially recruited 53 people. After a little churn in the final weeks, we finished in the middle of last week with a maximum possible attendance of 51.

Every one of those 51 people came. So far as we are aware, this is unheard of for any deliberative body that has not been assigned an official role in the policy process. In part, it reflects high public interest in Brexit – the most important set of decisions to face the country in generations. In part, we hope it also reflects the care we took in designing our recruitment strategy and communicating with members ahead of the event.

Other project participants excelled as well. One of the key lessons of the weekend for me is the value of professional facilitation. Government-initiated citizens’ assemblies in other countries have been chaired by senior judges, a university president, a theologian and television personality, and the head of a leading charity, often supported by graduate students working as group facilitators within the assembly.

We adopted a different approach, engaging Involve to plan the weekend programmes, chair the discussions, and coordinate a team of professional group facilitators. For a contentious topic such as Brexit, this was vital. The facilitation team – expertly led by Sarah Allan, with assistance from Tim Hughes and Kaela Scott – did a superb job of keeping the discussions on track and on time, helping all members participate, and encouraging a constructive, open-minded approach.

Our expert speakers also delivered magnificently. Angus Armstrong, David Paton, Thomas Sampson, and Shanker Singham spoke on trade policy. Catherine Barnard, David Coleman, and Jonathan Portes spoke on immigration. Anand Menon served as roving expert throughout the weekend. We worked them hard: all presented and then spent extended time answering Assembly members’ questions. They were clear, focused, and engaging. We are deeply grateful to them all.

Above all, though, what observing the Assembly members at work reminded me is never to underestimate the willingness and ability of members of the public to engage with complex political questions. Our political system leaves many people feeling unable to play an effective role.

But if we structure political discussions so that people have the time and resources to learn about, discuss, and reflect on the issues and explore possible ways forward, they do a fantastic job. The Assembly members showed immense commitment. It was a privilege to be with them throughout the weekend.

The Assembly will meet for its second weekend in three weeks’ time. Until then, members have a chance to reflect, explore the briefing papers, and mull over the issues with family, friends, and colleagues. At the second weekend, they will discuss and then vote on options.

Our key task then will be to ensure that the Assembly’s voice is heard. Anyone who sees a citizens’ assembly in action knows that its conclusions deserve to be listened to. We will work hard to gain the widest possible audience for the Assembly among policy-makers, commentators, and the wider public.