Covid-19: a threat to the Conservative coalition of Leave voters?

Since 2015, the Conservatives have constructed a new and striking coalition. To an affluent and southern core vote, the Tories have notably added Leave voters: most famously in a set of ‘Red Wall’ constituencies in more northerly parts of England.

At the 2019 General Election, Beaconsfield and Bolsover were, politically, as one. Is this new coalition politically sustainable? More particularly, has the Covid-19 pandemic created the circumstances in which it might be undone? Perhaps.

That Brexit played a large role in the formation of this coalition can be seen rather clearly using the wonderful data made available by the British Election Study (BES). Since 2014, the BES team has been surveying large and repeated samples of UK voters, allowing us to follow many respondents over many years.

During 2020, two additional surveys were fielded to a subset of BES respondents as part of the Public Assessments of Covid-19 Economic Response (PACER) project.

The BES (and PACER) data include responses to the question: ‘How likely is it that you would ever vote for each of the following parties?’ Each of the main political parties was listed and responses provided on a 0-10 scale, with 0 ‘very unlikely’ and 10 ‘very likely’.

With these data, we can assess the extent to which voters are becoming warmer or cooler to a party, even if they have not (yet) decided to change the party that they would vote for.

The first figure below shows how the average responses to this vote propensity question regarding the Conservatives has varied since 2014, broken out by those who ultimately voted Leave or Remain at the referendum. The vertical dashed lines indicate the dates of the general elections and the Brexit vote.

It shows quite clearly that, while Leave voters were always relatively more positive about the Tories than Remain voters, this became even more true in the aftermath of the referendum.

This increased Leaver affinity for the Conservatives deflated through Theresa May’s hung Parliament, but was dramatically restored by the 2019 General Election.

The propensity of Leave voters to say they would ever vote Conservative, 2014-2020 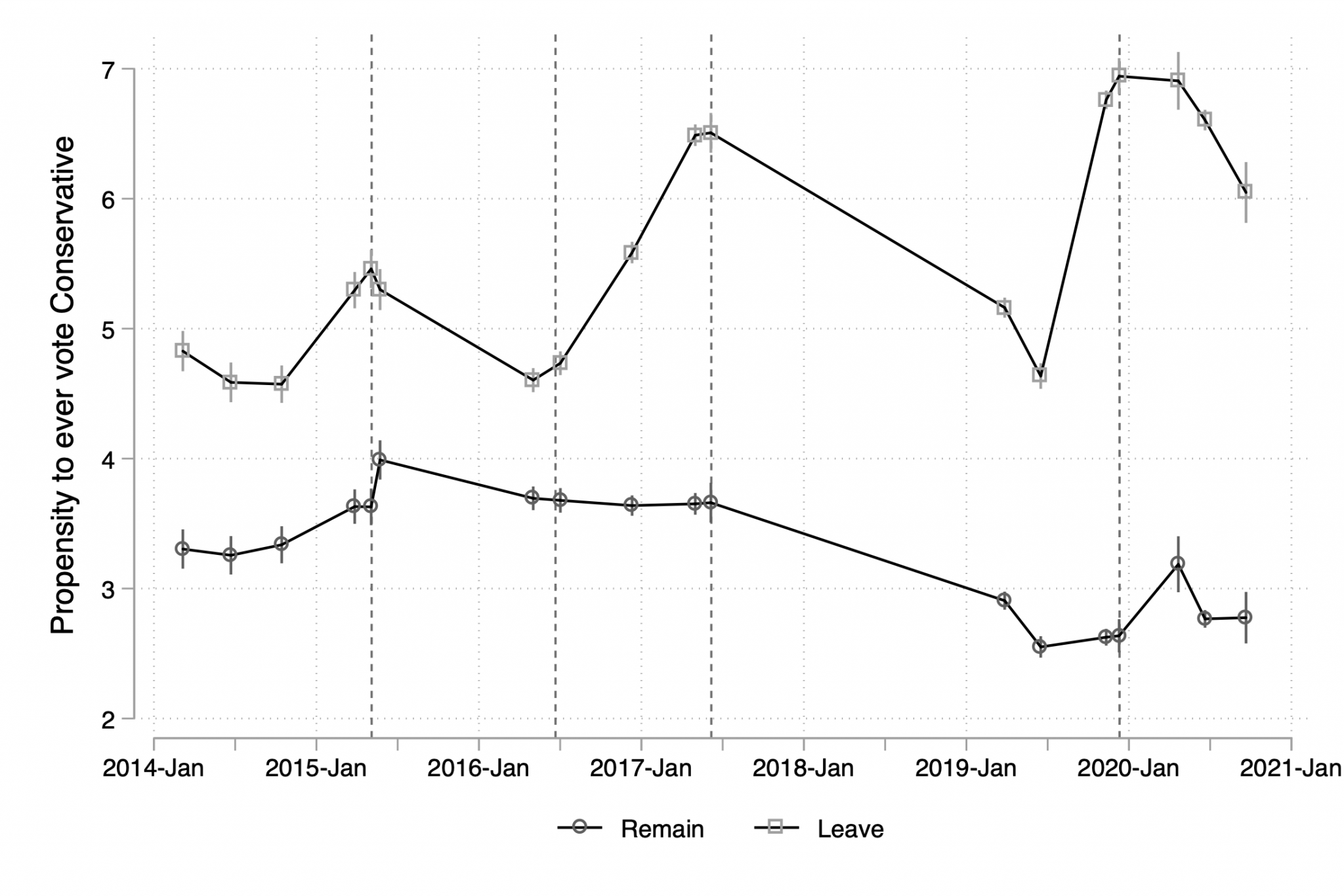 Prior to the referendum, these two groups are indistinguishable from each other in their hostility to the idea of ever voting Tory. As soon as the referendum result is announced, the Labour-Leavers start to become much more positive about the Conservatives. This is a change that not even May’s Brexit wilderness years could fully undo.

By the 2019 election, this group is much closer to the average of the remainder group of respondents (which is, by construction, not very Labour leaning).

The propensity of all voters (black), Labour Remainers (red) and Labour Leavers (purple) to say they would ever vote Conservative 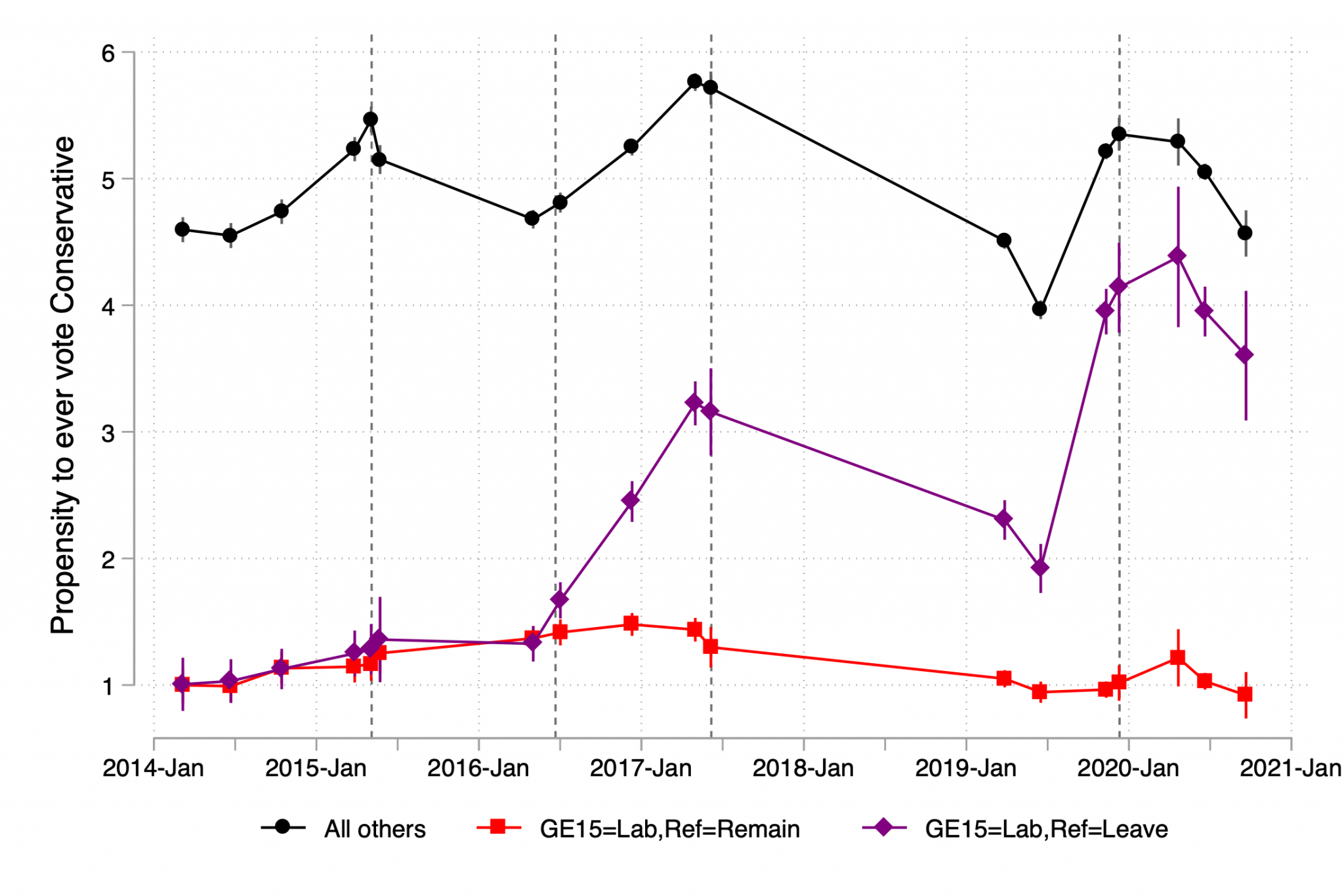 We can see a similar story emerging by tracking the same groups of voters regarding their propensity to ever vote for Labour. While Labour-Remainers very largely stuck with the party on this measure, Labour-Leavers became clearly less positive toward the party.

Notably, the start of this development pre-dates the referendum, so Brexit is likely not the whole story, here.

The propensity of all voters (black), Labour Remainers (red) and Labour Leavers (purple) to say they would ever vote Labour 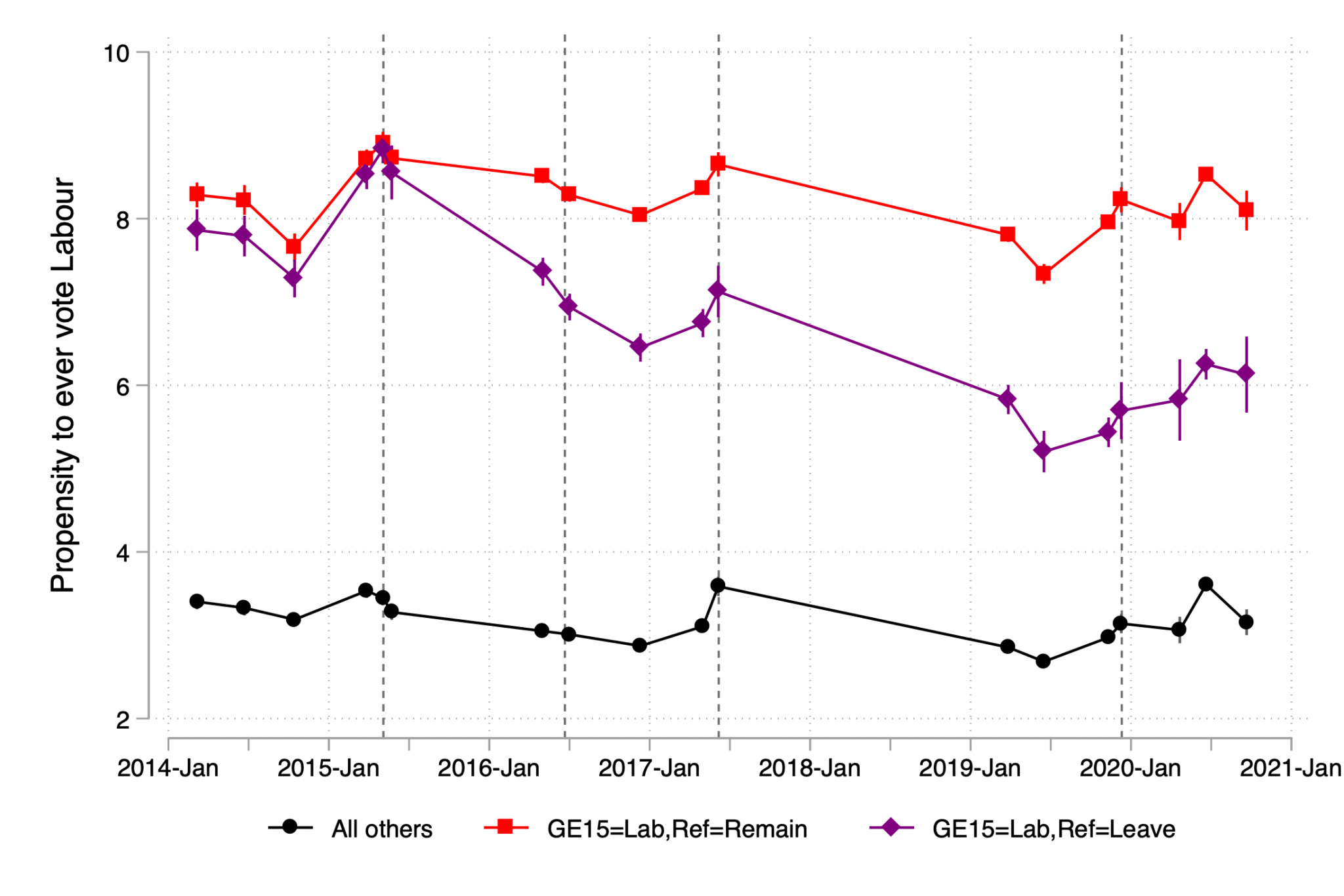 Do the events of 2020 provide any reasons for the Conservatives to be worried about the sustainability of their new coalition? In short: yes, a few, but the jury is still out.

First, whether we follow all Leave voters, or just Labour-Leavers, it is clear there has been a bit of a fall in Conservative vote propensity since the peak around December 2019 to April 2020.

Compared with the trends across the whole 2014-2020 time period, these shifts are not huge, but they also come with small upticks in Labour-Leaver affinity with the Labour Party.

Second, and perhaps underpinning the first point, mass perceptions of government competence have taken a big hit in 2020. On both economic handling and education, the Government appears on rather weak ground.

While there was an initial boost in those perceptions at the start of the pandemic (in April), they have since fallen across all voter groups – Labour-Leavers included.

This may be reversion to the pre-pandemic mean, or it may be based on a more meaningful evaluation of government performance during this period.

If it is the latter, especially the economic handling evidence is, on its face of it, a problem for the Conservatives as economic performance tends to strongly affect political support.

A sharp bounce back from recession in the latter half of 2021 may help, but it is also unclear that this would be felt as strongly in the all-important Labour-Leave areas. 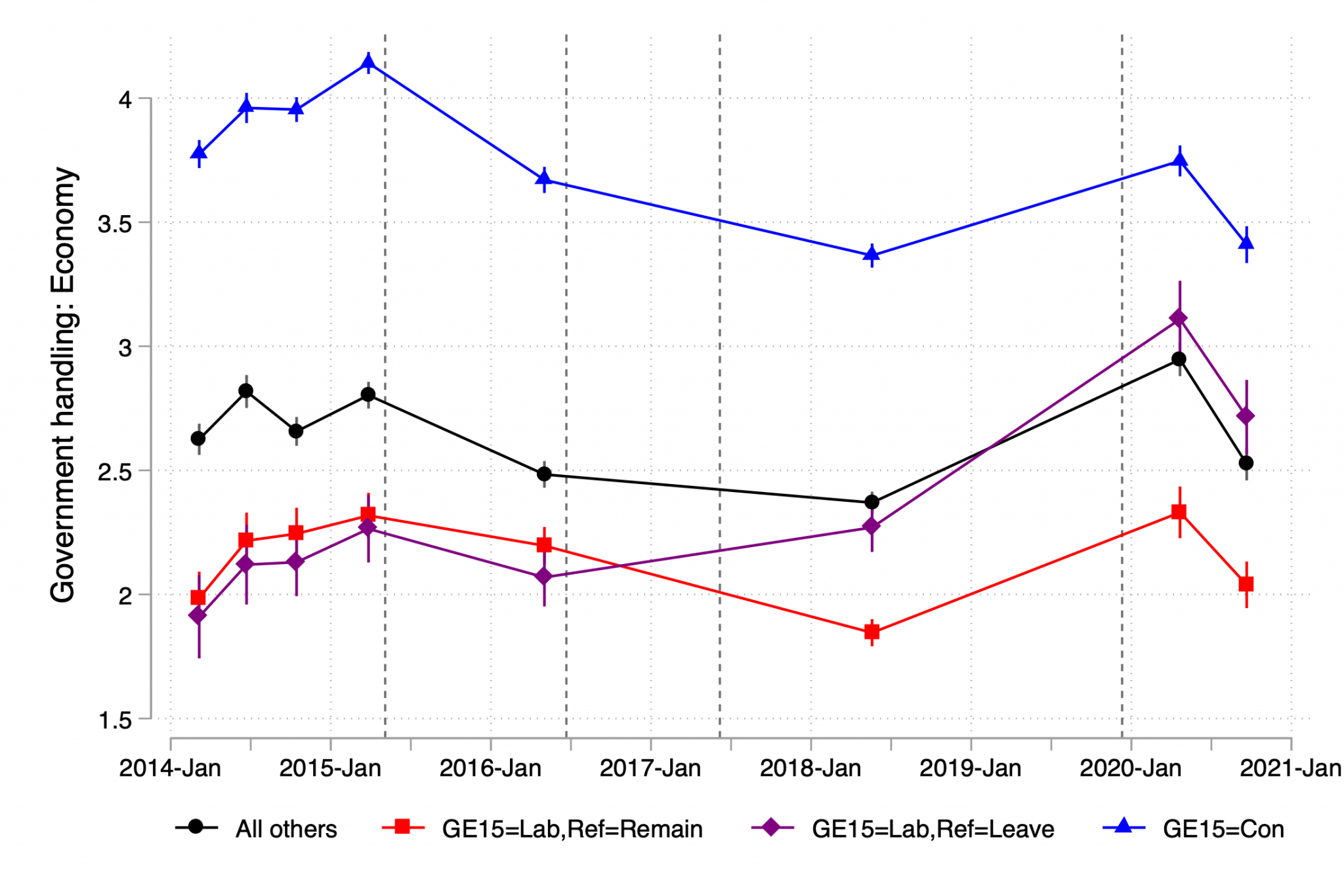 Third, if Brexit is now ‘done’, can those electoral developments since 2016 that appear driven by it survive its fall from salience? Put another way: what will be the ideological and policy glue that holds the Conservatives’ 2019 coalition together?

On the classic left-right ideological dimension, the Tories face coalitional problems. For example, when asked to express their degree of opposition to the Government making income more equal, Labour-Leavers look an awful lot more like Labour-Remainers than they do Conservatives (also identified by 2015 vote choice).

This is true even though the longer-term trend of those Labour-Leavers is one of slightly increased opposition to redistribution. 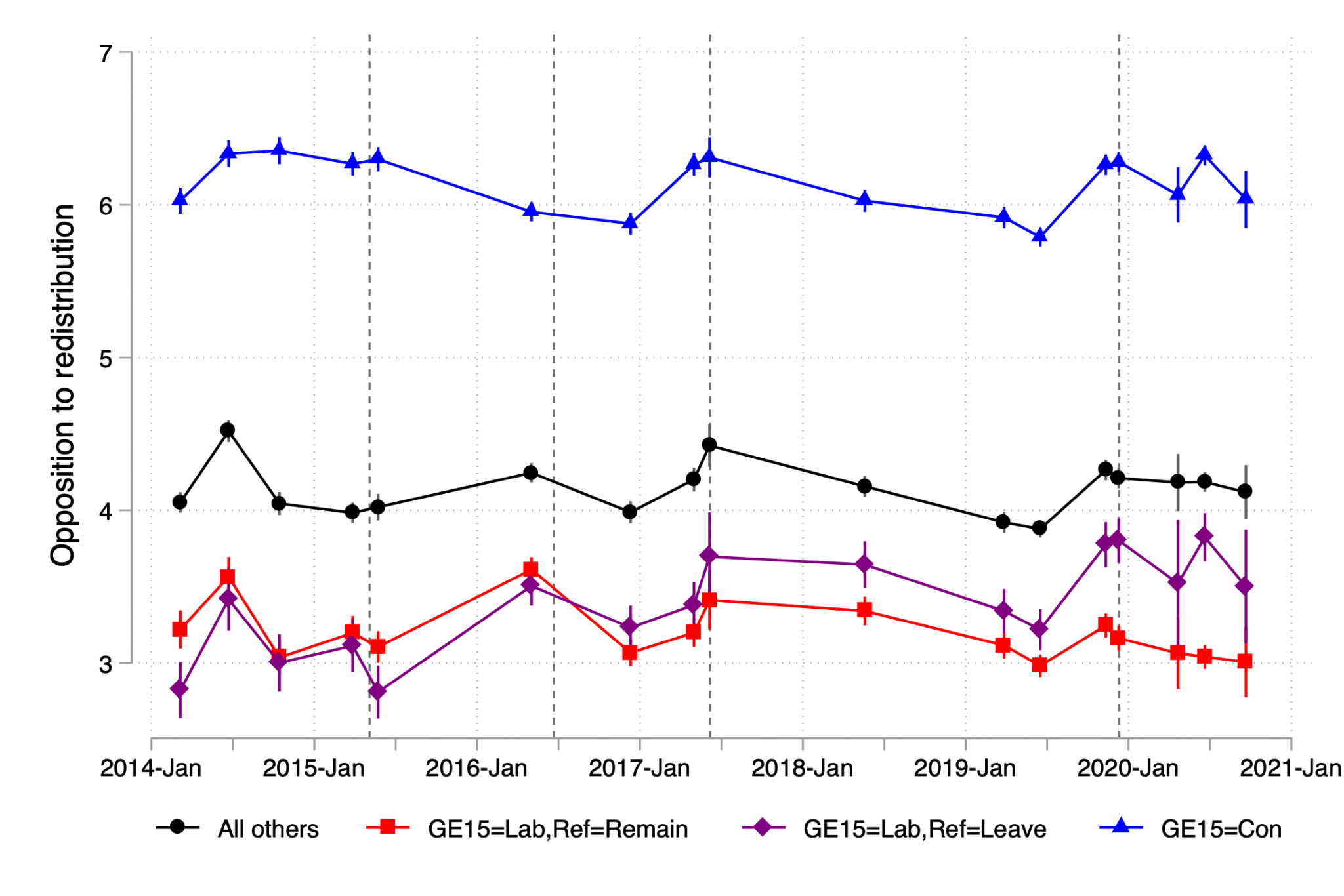 Similarly, during 2020, Labour-Leavers have consistently expressed much more left-wing views on the appropriate role that the Government should play in the economy than traditional Tory voters. This is particularly clear when asking if the Government has a responsibility to provide a job for everyone.

Support for the idea that the Government should provide a ‘job for all’ among all voters (black) Conservative voters (blue), Labour Leave voters (purple) and Labour Remain voters (red) 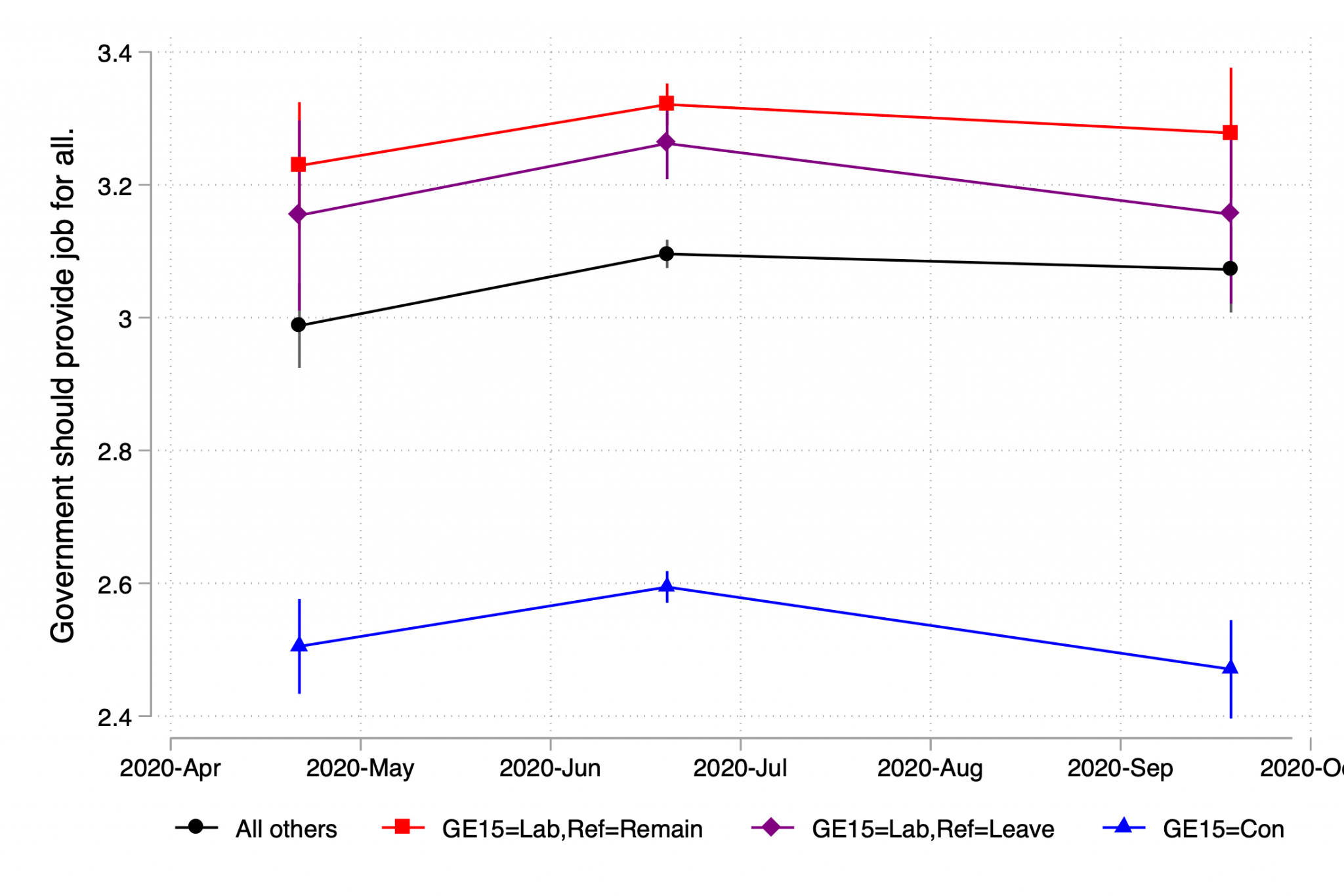 Beaconsfield and Bolsover probably do have quite different views in all of these regards. Given that, if left-right ideology – in whatever form – becomes more politically salient, the Conservatives may have a problem.

By Dr Tim Hicks, Associate Professor in Public Policy, University College London. Tim and his colleagues will be exploring the topics from this blog at an event on Thursday 21 January, looking at Public Attitudes to the State post-Covid – find out more here.