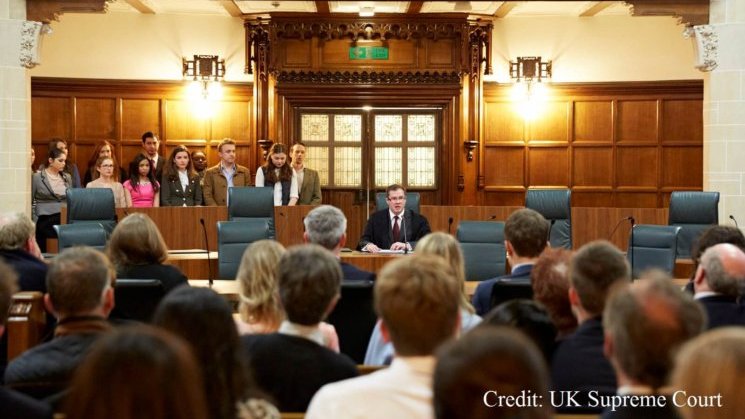 It is well known that the United Kingdom does not have a codified, written constitution, to which reference can be made when matters of constitutional law are in question. Instead, there is a variety of sources of constitutional law. There are conventions, which are understandings, often unwritten, about what can or cannot be done. These are not fixed but can evolve over time, as long as there is general agreement. Second, there are laws adopted by Parliament, which happens when the conventions break down or need clarification. These, however, can be repealed by a simple majority in Parliament. Third are provisions arising from the way the UK was constructed, for example the Acts of Union by which Scotland and England were united. Finally, there is the principle of parliamentary sovereignty by which Westminster claims the right to make or unmake any law.

This has usually trumped other principles but has never been entirely secure as its application to Scotland has been disputed and the great apostle of parliamentary sovereignty, A.V. Dicey abandoned it when it suited him (denying that Parliament could give self-government to Ireland). We have generally muddled through by applying these various principles as suited the case, except in major crisis such as that round Irish Home Rule or the power of the House of Lords in the early twentieth century.

A hundred years later, we are again faced with a muddle of constitutional principles. Neither entry into the European Union (as it now is) in the early 1970s, nor devolution in the late 1990s were accompanied by the appropriate revision of constitutional doctrine. Instead, the fiction of parliamentary sovereignty was restated just as the reality was melting away. Brexit has exposed this gap dramatically, as we have seen in the case before the Supreme Court.

The referendum was unknown to the constitution until 1975 and subsequent referendums have been rendered constitutional by the notion that they were merely advisory to Parliament. In the Brexit referendum this was explicit as, unlike in the 2011 referendum on the voting system, there was no inbuilt mechanism to implement it.

The issue before the Supreme Court this month is whether the UK Government can trigger Article 50, starting the process of withdrawal from the UK, without parliamentary consent in legislation. The Government’s case is twofold. First, it argues that EU matters are foreign affairs and therefore come under the royal prerogative, not requiring parliamentary approval. This is indeed true of most international treaties. Its opponents argue that the EU affects vast swathes of domestic law, in which European law prevails, and that the 1972 Act taking us into Europe created new rights, which cannot be taken away by the executive.

Had it stopped there, it would have had an arguable case, although perhaps a not a convincing one. Brexiters, however, added another argument, that the will of the people in the referendum should prevail. The UK Government and most of the Labour Party accept this. Indeed, it is suggested by some that a referendum can invoke the royal prerogative directly, without parliamentary intervention. This is a paradoxical argument for people who fought the referendum promising to restore power to the UK Parliament. In fact it invents a wholly new constitutional principle with radical implications.

The Scottish Government has expanded on the arguments of the UK Government’s opponents, agreeing that Article 50 requires parliamentary legislation but adding that, under the Sewel Convention, it also requires a consent motion in the Scottish Parliament. The Sewel Convention, established at the outset of devolution, is an agreement that Westminster will not normally legislate in devolved matters without such a resolution. It has been expanded to include legislation that affects the powers of the devolved parliament.

Again the argument is twofold. The UK Government’s case as put by its Advocate General is (a) that Brexit is foreign affairs and thus not devolved; and (b) that the Sewel convention is only a political understanding with no binding force. Again, the second argument is more difficult to resolve.

Following the Scottish independence referendum, the unionist parties promised to entrench the Sewel convention as strongly as is possible in our unwritten constitution. Accordingly it was stated in the Scotland Act (2016) that Westminster would not ‘normally’ legislate in devolved matters without consent. Had the UK Government, in the Brexit case, relied on that word ‘normally’ they could have argued, with some plausibility, that this is not a normal case.

That, however, might have been to concede that they needed to convince the Supreme Court (or anyone else) of the need to over-ride the convention. So the Advocate General added that Sewel is merely a ‘political’ understanding with no force in law. In fact, conventions have long been seen as more than political agreements but not as law, enforceable by the courts. They provide the ground rules for politics and part of the foundation of our largely unwritten constitution.

We can argue about exactly what they are but not that they are irrelevant. It does seem inconsistent, moreover, to deny the relevance of Sewel while insisting claim that the referendum result must be respected, since that argument itself depends on a newly-invented convention that referendums (even advisory ones) bind government and Parliament. Moreover, if the UK referendum result is binding, one could argue that the large Remain majority in Scotland is also relevant. This would be consistent with an interpretation of the United Kingdom as a union of nations rather than a unitary nation-state.

In their eagerness not to concede any ground, the Westminster Government has thus asserted the most centralizing and least ‘federal’ understanding of our constitution. Given that conventions are not legally enforceable in the courts, they may well win. This has large implications for the future relationships between Edinburgh and London.

Michael Keating is Senior Fellow in the UK in a Changing Europe and Professor of Politics at the universities of Aberdeen and Edinburgh.