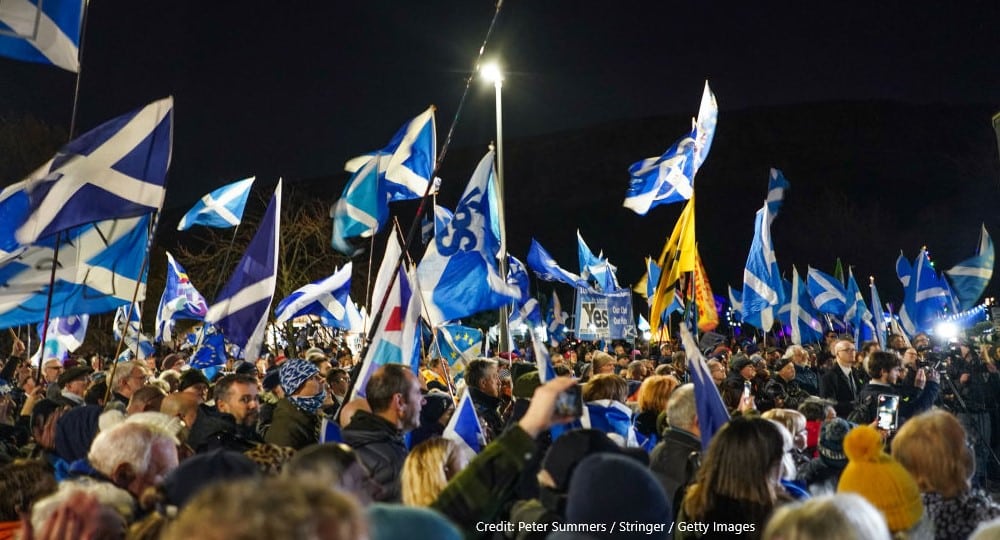 Chris McCorkindale sets out the backdrop to the Supreme Court’s decision that the Scottish Parliament does not have the power to legislate for a second referendum on independence, and examines the other potential pathways to a referendum.

The 2014 referendum was never likely to be the last word on Scottish independence. Politically, the 55%-45% result for NO offered encouragement to nationalists that, next time, a campaign that began in 2012 with support for independence at 32% could get YES over the line.

In their 2016 Scottish Parliament election manifesto, the SNP set out the circumstances that they believed would justify a second referendum: ‘clear and sustained evidence that independence has become the preferred option of a majority of the Scottish people’ or ‘a significant and material change in the circumstances that prevailed in 2014’, explicitly citing ‘Scotland being taken out of the European Union against our will’.

The latter condition has come to pass and, though the result of the 2016 Brexit referendum has yet to produce a consistent and clear majority for independence in opinion polls, all three UK general elections (in Scotland) and both Scottish Parliament elections since 2014 have returned pro-independence majorities.

Legally, the section 30 order that underpinned the 2014 referendum parked rather than resolved the question of whether – in the absence of the explicit transfer of power – an independence referendum bill would be within the legislative competence of the Scottish Parliament.

It was possible for the UK government to believe that the section 30 order was a necessary pre-condition of referendum legislation and at the same time for the Scottish government to believe that the Scottish Parliament always had the power so to legislate for an independence referendum, but that – at a pragmatic level – a section 30 order would put the question of legislative competence ‘beyond doubt’ (insulating it from judicial review) and would deliver ‘a result that everyone will respect’. Where the UK government saw a duck, the Scottish government saw a rabbit.

This was the context in which the Lord Advocate referred the Scottish government’s draft Referendum Bill to the Supreme Court: to provide certainty in the face of ambiguity. Sat against Brexit and those parliamentary (though not yet popular) majorities, the Scottish government’s careful case for its preferred route to a referendum – the negotiated 2014 model underpinned by a section 30 order – was flatly rejected by the Johnson government.

In June, the First Minister announced her response: the publication of a draft Referendum Bill accompanied by a novel pre-introduction reference to the Supreme Court to remove ambiguity. Certainty was necessary to enable the Lord Advocate to fulfil her role – established by Scottish Ministerial Code – to ‘clear’ any ministerial statement to the Scottish Parliament that a Referendum Bill would be within legislative competence.

On 23 November, the Supreme Court handed down its unanimous judgment: that a unilateral Referendum Bill would not be within the legislative competence of the Scottish Parliament. Whereas the Lord Advocate had presented the view (a view with some academic support from across the constitutional divide) that the referendum itself (as opposed to the legislation (if needed) to implement the result) would have no legal effect – for the court the ‘purpose and effect’ of the Bill ‘would not be confined to the holding of a referendum’.

Rather, it said, a lawfully held referendum would ‘not merely [be] an exercise in public consultation or a survey of public opinion’.  To the contrary, its ‘official and formal character’, the need for statutory authority to ‘set the date and the question, to define the franchise’ and otherwise to regulate the conduct of the referendum and to authorise necessary public expenditure, signalled the referendum’s special character.

As ‘a democratic process held in accordance with the law which results in an expression of the view of the electorate on a matter of public policy on a particular occasion’, underpinned by ‘statutory authority and adherence to the statutory procedure’, it was ‘clear’ to the court that the draft bill would relate to the reserved matters of the Union of Scotland and England and the sovereignty of the UK Parliament.

With this pathway definitively closed, and another – via a section 30 order – unlikely to open, the First Minister initiated Plan C: to pursue independence directly at the ballot box, framing the next UK general election in Scotland as a ‘de facto’ referendum on Scottish independence.

The risks are obvious. Achieving an unprecedented 50%-plus of the (Scottish) vote at a UK general election is a tall order – even a near SNP whitewash in 2015 fell just short at 49.97% of Scottish votes. In addition, it will be difficult to persuade opponents of independence to believe that votes cast at a general election can directly be attributed to that single issue.

More fundamentally, an approach that for so long has pursued a negotiated referendum as the surest way to secure losers’ consent, good faith negotiations with the UK government and international recognition – now looks vulnerable on all three fronts.

For the UK government’s part, the Secretary of State for Scotland, Alister Jack, has said that there remains a constitutional pathway to a second referendum. However, the test that he put – ‘the duck test… [I]f it looks like a duck and it sounds like a duck and it waddles like a duck, it’s probably a duck’ – offers little further insight. Whatever the test – majority support? by and for whom? to what level? for how long? expressed in what way? through which forum(s)?) – Jack said, ‘we don’t believe we’ve reached it now’.

As the political campaign for independence turns to the task of achieving a majority position in favour (and two polls following the judgment might offer nationalists some encouragement), it is to this question that the constitutionally minded might turn.

If not the conditions set out by the Scottish government, what are the conditions that might trigger a legal and democratic referendum capable of delivering independence?

There will be no return to the courts here. The Court of Appeal in Northern Ireland has already rejected any requirement on the part of the Secretary of State for Northern Ireland to set out the circumstances that would trigger a border poll on the territory’s constitutional future, citing the ‘constitutional value of flexibility’ and the need to exercise ‘political judgment in the context of differing and unpredictable events’.

But so important a constitutional question cannot rest on ‘belief’ (from either perspective) that a point has been reached. After all, one government’s duck is another government’s rabbit.

By Dr Chris McCorkindale, Reader in Law, University of Strathclyde.