Coronavirus: the challenges for devolution 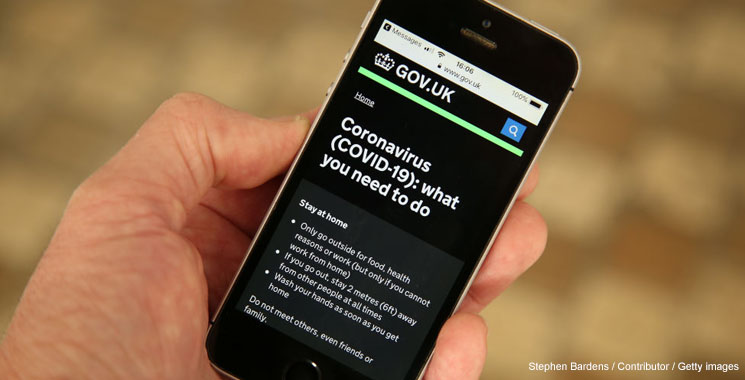 The UK’s first two cases of coronavirus were reported on 31 January. By 1 March, 35 cases had been identified – with cases found in Wales, Northern Ireland and Scotland as well as England.

On 2 March, Boris Johnson chaired an emergency meeting on the pandemic in the Cabinet Office Briefing Rooms. Political leaders from Belfast, Cardiff and Edinburgh took part in this COBRA meeting.

The next day a coronavirus action plan appeared, agreed by the four UK governments. Published by the Whitehall Department of Health & Social Care, it provided a remarkably clear joint outline of the changes to come.

Why is it remarkable that a clear UK-wide joint plan was agreed? In short, Brexit had strained relationships between London and Belfast, Cardiff and Edinburgh.

Some have argued that Brexit preparations strengthened capacity to respond to coronavirus, say, in business, or the deployment of Whitehall civil servants. No such case can be made for intergovernmental relations (IGR).

Joint Ministerial Committees, the UK’s main forum for IGR, fell into disuse before 2016. A new one was created for the European negotiations, but its record is patchy, and its last meeting was held in Cardiff on 28 January 2020.

Generally, participants reveal little about these meetings, but briefings after the Cardiff meeting showed the sorry state of relations among the parties. Even the Welsh government, historically the most committed to nurturing these processes, was disenchanted.

Faced with a life-threatening emergency, we should expect the UK’s four governments to work together. Against a backdrop of mutual suspicion, it is sobering to find ourselves commending the governments for agreeing an action plan.

However, there have also been some frictions, and these have pre-Brexit roots. Some reflect basic, legitimate political differences – including whether the UK should continue as a single state.

Its governing principle sometimes seems to be ‘devolve and forget’. Of course, independence-minded Scots may also prefer to focus on self-rule rather than investing in shared-rule structures.

Normally, the characteristics of the UK system(s) of government are only of interest for a few academic specialists and political anoraks. Now they have an urgent significance for how policy is made and announcements are understood by citizens and businesses.

In a host of policy fields most affected by Covid-19 – including health, social care and education – the UK government is, in effect, the government of England, since the devolved governments are responsible for them elsewhere.

Yet English politicians, the government in Whitehall, and the UK-wide media have displayed a striking and sustained inability to name England as the object of government policy made in SW1 in these fields.

This is not the moment for a forensic analysis of the strengths and weaknesses of the UK government’s overall coronavirus strategy, or of coordination between the UK’s four central governments.

But we cannot ignore the fact that there have been differences and frictions alongside the remarkably quick development of a shared position. Worse still, there is some evidence of behind the scenes briefing against politicians from other governments.

Each devolved place has its own characteristics. In Belfast, First Minister Arlene Foster and her deputy have openly adopted conflicting positions.

The Scottish government has activated its ‘Resilience Room’ equivalent to COBRA – known as SGoRR.

Matching the emphasis on self-rule, the communication of coronavirus strategy has come from separate daily briefings in Belfast, Cardiff, Edinburgh and London. UK-wide media is overwhelmingly focused on the London briefing.

Frankly, the territorial extent of the policies covered in the London briefings have not always been clear – neither in the government’s own statements, or in how they have been reported by the media.

This muddle may reflect the standard operating practices of Whitehall departments that, in normal times, make policy for England.

Much of the Johnson administration’s response to the pandemic has been led by Matt Hancock, whose usual cabinet role is running English Health and Social Care policy.

At a time of heightened anxiety, debate can become heated and messages confused. Current cooperation could become more strained if the emergency intensifies. To guard against this possibility, work to improve current practice might help consolidate cooperation.

He mentioned a developing facility in Glasgow, named NHS Louisa Jordan by the Scottish government – but described it as a ‘Nightingale’. He made no mention of emergency hospitals being created in Wales and Northern Ireland.

Information must flow from the people with governmental responsibilities to the publics they govern.

Might devolved governments be involved in some UK-wide briefings, to underline there are four somewhat distinct public health responses taking place led by different governments?

The UK government’s daily coronavirus briefings should be clear about when are they speaking only to England, and when to other parts of the UK.

Responsibilities can be UK-wide, temporarily ‘shared’, or firmly under the remit of the devolved governments: which is which?

Before the pandemic, UK intergovernmental relations were fundamentally broken. Some emergency cooperation has proven possible. But the response to Covid-19 has also revealed the perils of emergency cooperation, when formal IGR structures fail to function in normal times.

When the emergency is past, relationships between governments across the UK will need to be comprehensively reviewed and reformed.

As the pandemic evolves, lives will depend on a deepening of effective, mutually respectful cooperation.